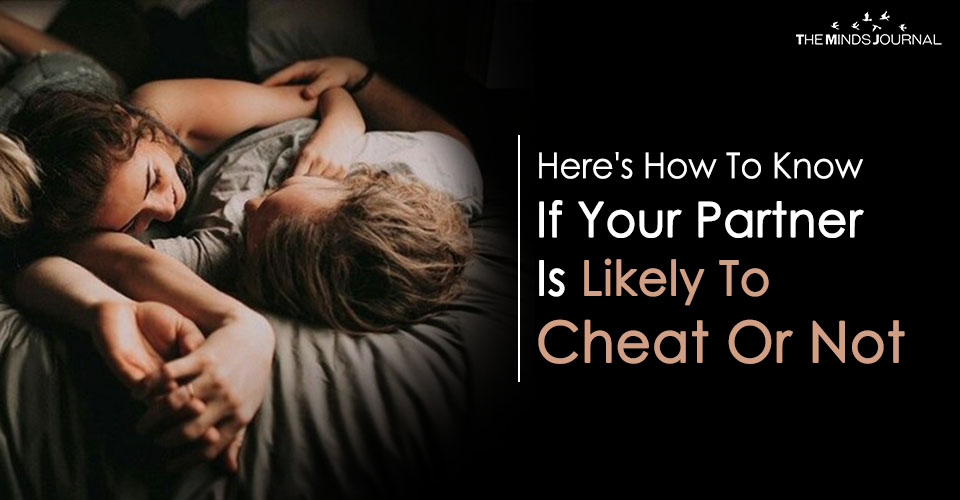 Wouldn’t it be greatly helpful to have a way of finding out if your spouse will cheat on you?

You can imagine how much damage you would be saving yourself from, if only there were a way of knowing this about them. Despite the opinion you have about your partner, there is every possibility that you are not even near being aware of the truth yet.

You may believe that your relationship is going to last a lifetime, what you have is perfect and no way on earth can they betray you because of how strong a bond you both share or the long time of happiness you have shared with each other. It is just better to be sure about everything having a more dependable method of predicting the future of your relationship.

The experts from the American Universities have conducted several studies and researchers to conclude that you only need to study the unfaithfulness behavior of two former generations in their family, in order to know the likeliness of them being disloyal. The experts suggest that one of the best ways to identify unfaithfulness is “suppression of behaviors and consequential emotional outrage” it causes. Furthermore, being disloyal is identified as being intolerable for idealistic relations.

Then what is it really that causes people to be disloyal to their loved one and invite so much trouble in life?

Usually, people are inclined to show disloyalty to their parents but they also end up wandering away from their family at times. The aforementioned behavioral scientists also propose that the Social Learning Theory can help understand the patterns of inheriting the unfaithfulness behavior from the former generation.

If your parents have shown faithfulness to their spouse all their life, then it is clear that you understand the importance of remaining faithful to your partner and you’re likely to follow the same path. On the other hand, if either of your parents has at least once shown disloyalty to the other, you are likely to lose meaning about having a romantic relationship.

In order to gain a better understanding of this pattern of inheriting the unfaithfulness behavior, the group of experts held a few experiments surveying college students and adults online. The samples mostly came from the people in a dating relationship rather than marital. An instance of infidelity was defined as something they individually considered as an act of unfaithfulness themselves, in their opinion. In the survey, the participants showed how much they agreed upon “if infidelity could have a positive result”, “If infidelity could end a relationship” and “if it was okay to sleep with someone you are not in a relationship with”. Apart from this, they also reported how inclined were they to ever cheat on their partners.

The first conclusion they had from the study they conducted was that people with infidel parents were more probable to favor infidelity and therefore be more inclined to engage in infidelity themselves. In fact, their comfort level and faith in their partner had little to do with their reactions and hence outcomes.

The second result of the study was that what they thought about infidelity did not depend on their parents’ infidelity behaviors.

The third and the most important conclusion was that when a parent was involved in cheating and was very unconscionable about it, that is what contributes the most in causing the growing up the child to develop acceptance towards unfaithfulness in a relationship.

Parental communication plays a crucial role in defining the beliefs of a grown-up child, as depicted in the third conclusion of the study.

Adding further to these outcomes, parental infidelity leaves a strong impact on the belief system of the child hence influencing the opinion they develop about infidelity. Although the study gave promising results, it had some boundaries like it was based on the instantaneous response of a large audience and not consistent observations from a dedicated group of participants. Nonetheless, the study opens new directions for research and further analysis.

Looking at your own relationship in the light of these experiments, you can begin with the current track record of your partner. If you have been in a faithful relationship for several years, you are already on the safer side. But if you have not spent enough time knowing the other person, getting to know about their parents’ might be a good idea. You can go by observing the behavior of his or her family and find out if there is any history of cheating or infidelity. You may not be able to ask such a thing directly over dinner but there is enough out there to read and figure out on your own. There is a possibility that it is hard for your partner to resist the temptation of infidelity if he or she has grown up in a family marked by disloyalty. Whereas it becomes quite far-fetched for someone to even think about cheating if there hasn’t been any such activity in the family before. Apart from the idea of transmission of infidelity in a family, the idea or belief that we are superior or we deserve better if something that supremely contributes to being the infidel. Settling for someone you don’t think of as worthy enough is what causes the mind to wander and look outside for more options.

In a nutshell:  If the person you are involved with is important to you and you intend to spend a long time with them, some investigation around the way how communication takes place in the family and recognizing the infidelity running in the family can help you be sure about your future. Being in a relationship can deeply impact your life and it already means that you let the other person be half responsible for what happens in your life. Values like faithfulness and commitment hold high importance in such relations. If these values are important to you, getting to know your partner’s viewpoint on them can help you come closer to each other.

10 Types Of People Who Cheat Their Partners The Most As…

Top 6 Zodiac Signs That Are Least Likely To Get Cheated…

15 Surprising Things You Didn’t Know About Cheating in Relationships

If Your Partner Cheats On You, It’s Because They Actually Love You