If Your Partner Cheats On You, It’s Because They Actually Love You 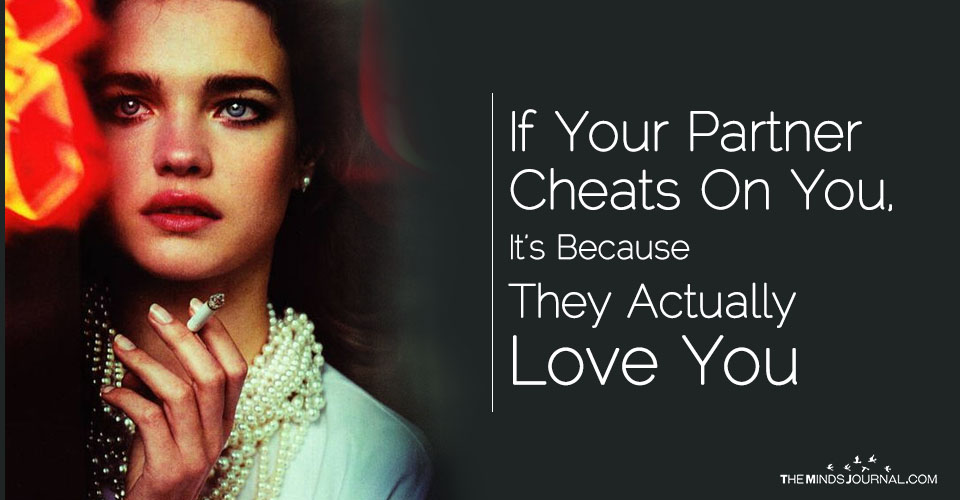 Hear us out. Rage. That’s probably the first emotion you feel after learning you’ve been cheated on. Likely closely followed by hurt, pain, sadness, and a host of other unsavory emotions.

In a long-term, monogamous relationship, cheating is the ultimate betrayal. It’s a breach of trust and for many, a major bump in the road to a healthy, successful relationship.

Despite the negative feelings many people have towards cheating, it happens more often than not. Thanks to an extensive survey we conducted with Ashley Madison, we found out that a whopping 64 percent of people have been cheated on at some point. 64 percent! That’s a whole lot of people left questioning whether or not they should pick up the pieces of their relationship while wondering why people cheat.

Which is, of course, the important question: why do people cheat? Whether you ask friends or search the internet, opinions on the subject abound and vary greatly. The answer, however, is simple. And alarmingly counterintuitive, considering the heartbreak you feel after being cheated on.

The answer, then? If someone cheats on you, it’s because they love you.

I know. That sounds so, so wrong. But the longer you sit and think about it, the more it makes sense — so hear us out.

In 2017, sociologist Alice M. Walker released Secret Life of the Cheating Wife, a look into the lives of women who joined Ashley Madison to have an affair. She found that, for most of the women she interviewed, cheating was the last resort in their “sexless, orgasm-less” relationships.

“They tried everything that they could think of to cause a change: begging, pleading, inviting their husbands to therapy,” Walker said in an interview. “and nothing had changed.”

While it may be easy to label cheaters as heartless, cheaters are fully aware of how hurtful their extramarital actions are and often express their guilt. However, many times they see it as the only way to salvage their relationships.

“Either they had to outsource the sexual aspect of their marriage or they were going to have to leave. They’re literally cheating to stay in those marriages,” explained Walker.

While that probably goes against everything you’ve ever heard, read, or felt first-hand, our survey shows that many people agree. We asked people to describe their understanding of why people cheat rather than break up their relationship. Opinions varied somewhat, but the top answer from both men and women was the same: 49 percent of men and 35 percent of women believe that people cheat because they love their partner, but are looking for more sexual or emotional fulfillment.

Cheating doesn’t mean your partner doesn’t love you or respect you anymore. In fact, it’s quite the contrary.

If your partner cheats on you, it’s because they’re doing everything they can to keep the relationship intact while still fulfilling their needs (because everyone has needs, both emotional and sexual).

As Walker found in her research, women who cheat “love their husbands, they have good marriages otherwise, and they want their children to grow up with their father. They don’t want to hurt anyone but they simply could not continue to go on without getting those needs met.”

Of course, it’s not just women that cheat.

Cosmopolitan interviewed a man who, under the pen name Dylan, revealed the reason why he began using Ashley Madison to cheat on his wife. Dylan told Cosmopolitan he had his first fling in 2014 with a coworker to remedy a dying sex life at home.

He then joined Ashley Madison to see what it was about. Though he claims he didn’t intend to make any moves on the site, he eventually began using the site regularly. And, like the women Walker interviewed, Dylan says the catalyst for his affairs is the fact that he is in love with his wife.

“I’m extremely happy with her in a lot of senses and I definitely love her,” he said. “However, while we’re as close as any married couple, there’s an absence of what I would describe as a ‘healthy sexual relationship.’”

Cheating is a wake-up call for relationships in a couple of different ways.

First, if kept a secret, the cheater is able to stay in the relationship while still having their needs met. As Dylan told Cosmopolitan, “I can see the positives it’s brought to our relationship, too. It’s definitely benefited our marriage.”

Second, if the partner being cheated on finds out, it opens a conversation into what can change in the relationship to prevent cheating from happening again. Cheating reveals cracks in a relationship that, if addressed properly, couples can patch up.

According to our survey, 51 percent of people see cheating as a forgivable offense. With a change in mindset and more open hearts and minds, this statistic can easily trend upward as more people accept cheating in a more optimistic light.

5 thoughts on “If Your Partner Cheats On You, It’s Because They Actually Love You”

What Is Monkey Branching In Relationships? 35 Signs Your Partner Has A Side Babe

Do you feel your partner is distancing themselves from you? Do they spend a lot of time with their “friends'' and on their phone? Do you feel your emotional connection is fading away? While your partner may not be cheating in the traditional sense, monkey branching in relationships definitely paves the way for it.

Let’s explore what this new relationship strategy is and understand the signs your partner is monkey branching.

What is monkey branching in relationships?

Monkey branching is a brand new term infiltrating the world of dating right now. While there are no actual monkeys involved in this process, it is a metaphor for how someone moves from one relationship to another just like how a monkey swing

46 Reasons To Not Cheat In Relationships

Cheating is never okay, and should never be justified. Just like some people give you millions of reasons behind their cheating on their partners, there are many people out there who have many reasons to not cheat.

On the day before their first anniversary, Ellis and Emma took a romantic rowboat ride in the middle of a nearby lake. Emma, enamored by the surrounding beauty, reached for Ellis' phone to take a photo. Instead of his habitual reaction, which would have been none at all, he froze, tightly clenching his fingers around his phone.

Emma, perplexed, at first thought Ellis was playing some sort of game or had a romantic surprise, guarding his phone so as to not reveal it. But, reading Ellis' frozen expression, one of mixed worry and shock, Emma knew that wasn't the case. After seconds that felt like hours, Ellis gave over his phone, f

5 Ways I Set Stage For My Spouse Cheating On Me

From lack of love to dealing with low self-esteem, there are many reasons behind cheating. If you have your spouse cheating in a relationship, here's why…

In retrospect, I know that, in many ways, I set the stage for my spouse’s cheating.

Don’t get me wrong, I don’t blame myself for his cheating but I do know that, in many ways, my actions made it so that our relationship was vulnerable to one of us stepping out.

I have a tremendous amount of regret for the things that I did that made our marriage susceptible to infidelity and I want to share them with you today so that you don’t make the same mistakes I made over the course of my marriage.

Here are 5 ways I

7 Warning Signs Your Boyfriend Might Be Cheating On You

Do you have a gut feeling that something unusual is in your relationship? All relationships have ups and downs, but how to spot if your partner is cheating? Here are telltale signs your boyfriend might be cheating on you.

I am guessing that you are reading this article because you believe that your boyfriend might be cheating.

I am guessing that you are feeling pretty devastated and that you aren’t thinking clearly around what might be going on.

I am guessing that you could use some