5 Powerful Ways Abusive Narcissists Get Inside Your Head 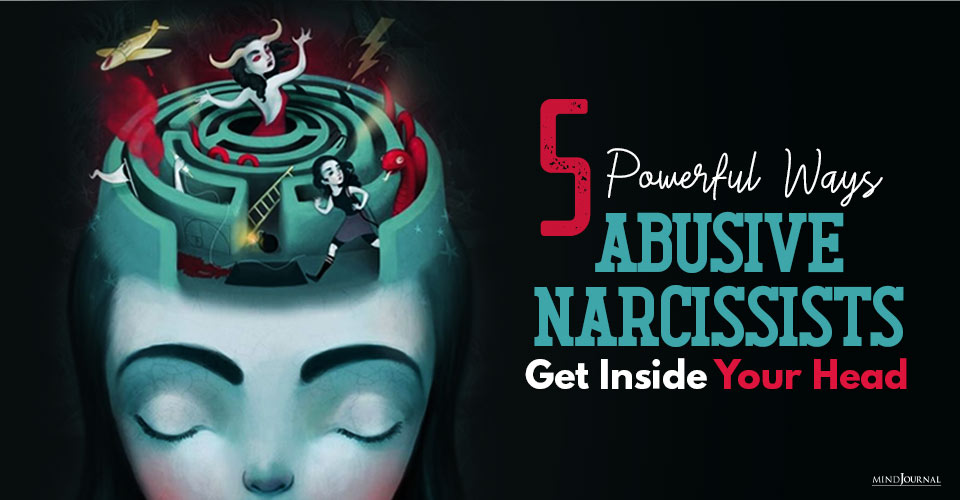 Five Powerful Ways Abusive Narcissists Get Inside Your Head by Shahida Arabi. Narcissists are able to abuse in many ways, but the most common strategy they use is psychological manipulation to make you think about things that are not actually there.

Narcissistic and abusive people use a variety of covert narcissistic manipulation tactics to manipulate and control others. It’s always useful to learn about the ways narcissists get inside your head to identify if any of these tactics may have been used on you.

In popular culture, the term “narcissistic” is thrown about quite loosely, usually referring to vanity and self-absorption. This reduces narcissism to a common quality that everyone possesses and downplays the symptoms demonstrated by people with the actual disorder.

While narcissism does exist on a spectrum, narcissism as a full-fledged personality disorder is quite different. People who meet the criteria for Narcissistic Personality Disorder or those who have traits of Antisocial Personality Disorder can operate in extremely manipulative ways within the context of intimate relationships due to their deceitfulness, lack of empathy, and tendency to be interpersonally exploitative.

Although I will be focusing on narcissistic abusers in this post, due to the overlap of symptoms in these two disorders, this post can potentially apply to interactions with those who have ASPD to an extent.

Related: Are Narcissists Evil? Or Are They Just Helpless?

It’s important in any kind of relationship that we learn to identify the red flags when interacting with people who display malignant narcissism and/or antisocial traits, so we can better protect ourselves from exploitation and abuse, set boundaries, and make informed decisions about who we keep in our lives.

Understanding the nature of this narcissistic abuse and how it affects us has an enormous impact on our ability to engage in self-care and own our agency and power.

Here are five powerful ways abusive narcissists get inside your head.

Watch out for covert narcissistic manipulation tactics when you’re dating someone or in a relationship.

Narcissists and those with antisocial traits tend to subject romantic partners through three phases within a relationship. The idealization phase (which often happens most strongly during the early stages of dating or a relationship) consists of putting you on a pedestal, making you the center of his/her world, being in contact with you frequently, and showering you with flattery and praise.

You are convinced that the narcissist can’t live without you and that you’ve met your soulmate. This is the starting point of how narcissists get inside your head.

Be wary of constant texting, shallow flattery, and wanting to be around you at all times. This is a technique known as “lovebombing” and it is how most victims get sucked in: they are tired of the “games” people play with each other in communication and are flattered by the constant attention they get from the narcissist.

You may be fooled into thinking that this means a narcissist is truly interested in you, when in fact, he or she is interested in making you dependent on their constant praise and attention.

The devaluation phase is subsequent to this idealization phase, and this is when you’re left wondering why you were so abruptly thrust off the pedestal. The narcissist will suddenly start to blow hot and cold, criticizing you, covertly and overtly putting you down, comparing you to others, emotionally withdrawing from you, and giving you the silent treatment when you’ve failed to meet their “standards.”

Since the “hot” aspect of this phase relies on intermittent reinforcement in which the narcissist gives you inconsistent spurts of the idealization phase throughout, you become convinced that perhaps you are at fault and you can “control” the narcissist’s reactions.

Even though the narcissist can be quite possessive and jealous of you, since he or she views you as an object and a source of narcissistic supply, the narcissist is prone to projecting this same behavior onto you.

The narcissist makes you seem like the needy one as you react to his or her withdrawal and withholding patterns even though the expectations of frequent contact were established early on in the relationship by the narcissist himself.

You are misled into thinking that if you just learn not to be so “needy,” “clingy,” or “jealous,”  the narcissist will reward you with the loving behavior he or she demonstrated in the beginning. The narcissist may use these and other similar words to gaslight victims when they react normally to being provoked.

It’s a way to maintain control over your legitimate emotional reactions to their stonewalling, emotional withdrawal, and inconsistency.