Empathy Is Killed By Popular Painkiller Found In 600 Different Drugs 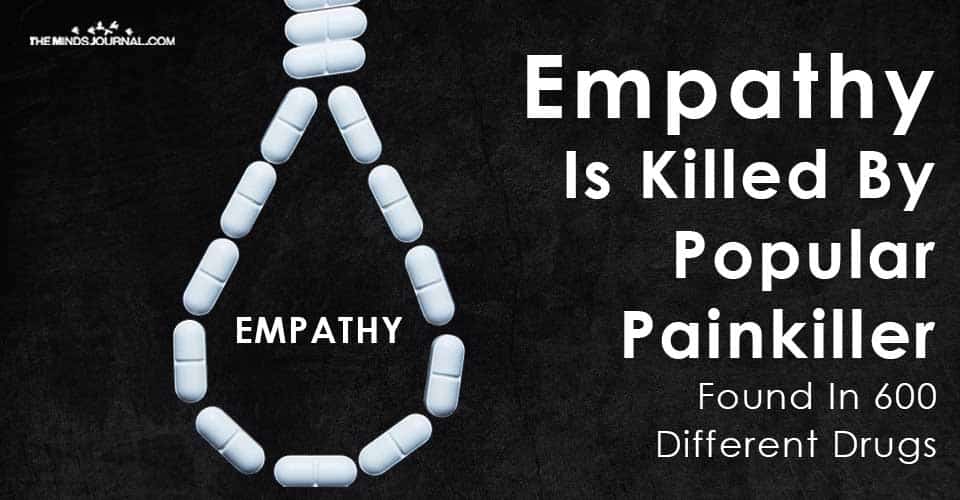 Are you consuming painkillers or popping empathy killer unknowingly?

Every week almost one-quarter of Americans use drug that is found to be an empathy killer.

Acetaminophen — commonly known as Tylenol in the US and paracetamol elsewhere — reduces people’s empathy for the pain of others, new research finds.

Acetaminophen is an ingredient in over 600 different medications, including being the main constituent of Tylenol.

The ubiquitous painkiller does not just kill pain, it also kills our fellow-feeling.

“These findings suggest other people’s pain doesn’t seem as big of a deal to you when you’ve taken acetaminophen.

Acetaminophen can reduce empathy as well as serve as a painkiller.”

Previous research has also found that the drug can reduce the positive emotions of those taking it.

Related: Signs you are an Empath

“We don’t know why acetaminophen is having these effects, but it is concerning.

As empathy regulates prosocial and antisocial behavior, these drug-induced reductions in empathy raise concerns about the broader social side effects of acetaminophen.

Related: Dear Empath, we need you

If you are having an argument with your spouse and you just took acetaminophen, this research suggests you might be less understanding of what you did to hurt your spouse’s feelings.”

The research was carried out on 80 college students.

Half were given a dose of 1,000mg of acetaminophen and the other half a placebo.

They then read a series of stories about people who had been hurt and were asked to rate their pain.

Related: Are You More Of An Empath Or A Narcissist? – MIND GAME

The results showed that those who had taken the acetamiophen consistently gave lower pain ratings for the people in the story.

The researchers carried out a couple of other variations to test people’s’ empathy for physical and social pain.

Related: Are you an Empath or HSP?

Dr Way explained the results of the experiment on social pain:

“In this case, the participants had the chance to empathize with the suffering of someone who they thought was going through a socially painful experience.

Still, those who took acetaminophen showed a reduction in empathy.

They weren’t as concerned about the rejected person’s hurt feelings.”

Related: Could Your Empathic Abilities Really Be Clairsentience?

The results clarify as to why using Tylenol to reduce your pain may also reduce your ability to feel other people’s pain.

The researchers are now moving on to ibuprofen to see if the findings are the same.

Are you taking acetaminophen or an empathy killer? Now it’s time to reconsider your decision. Let me know your thoughts in the comments.

The study was published in the journal Social Cognitive and Affective Neuroscience (Mischkowski et al., 2016).