Emotional Blackmail and Its 7 Signs 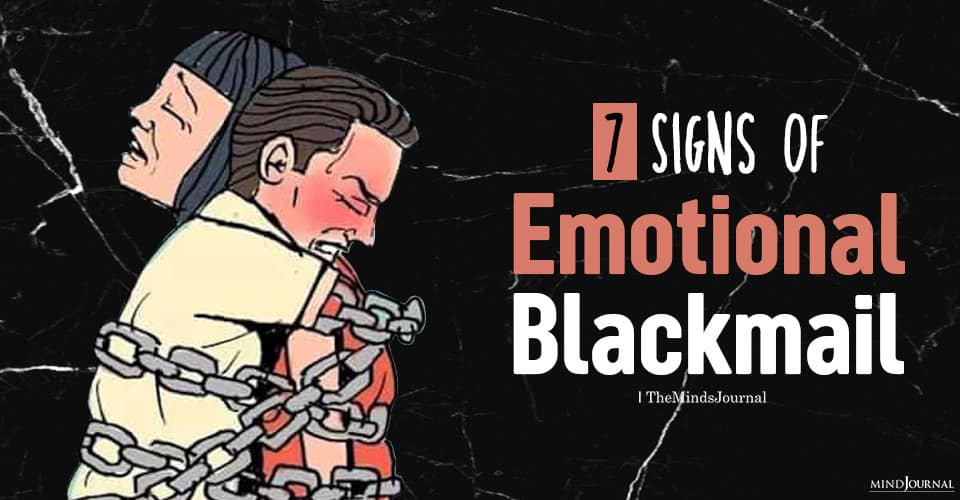 You’re in a relationship, romantic or not. It has highs and lows, just like every other relationship. While everything is all good and sound, there seems to be no inconvenient gestures or actions from the other person as such. But when the low points arrive, emotional leverage comes into play. Blackmailing on the grounds of all the emotional triggers that the other person is aware of, begins.

It becomes a passive-aggressive competition where the aggregator starts to down the other person in the relationship. Statements like “Do this, or else..!!” starts to appear and the comfort between them is instantly replaced by a feeling of being sabotaged.

This is called Emotional Blackmail. It describes a style of manipulation where someone uses your feelings as a way to control your behavior or persuade you to see things their way or worse, wants you to do their bidding. As subtle as it sounds, emotional blackmail is a very generic and common nature for people to get what they want. And destroy even the best of bonds on its way.

Like typical blackmail, emotional blackmail involves someone trying to get what they want from you. But instead of holding secrets against you or any direct form of aggression, they manipulate you with your emotions and weak points and worse, your trigger points.

Leaders in the field, Susan Forward and Donna Frazier identify the power dynamic that occurs in such manipulation. They suggest that emotional blackmailers employ a fear – emotion – guilt tactic to get what they want.

FOG is a term named by Forward, suggesting that fear, obligation, and guilt are the dynamics in emotional blackmail between the manipulator and the victim. The acronym FOG also accurately describes the confusion and lack of clarity and thinking that can occur in these interpersonal dynamics. Emotional blackmail can create a fog and contribute to feelings of fear, obligation, guilt, and anxiety.

According to Forward, emotional blackmail occurs in close relationships. The manipulator leverages knowledge gained about the victim’s fears. Blackmailers will use the information they learn about what the victim fears to manipulate them.

Forward suggests that one of the most painful elements of emotional blackmail is that they use personal information about the victim’s vulnerabilities against them. Another trigger blackmailers will use is putting the victim’s sense of obligation to the test. They will commonly create undeserved guilt and blame to attribute their problems to the victim.

Punishers operate with a need to get their way, regardless of the feelings or needs of the other person. Their motto is “my way or the highway.” Punishers will insist upon pushing for control and getting what they want with threats to inflict damage or harm.

Individuals can make threats of self-harm if the partner does not comply with what they want.

This is the voice of a victim conveying guilt on the partner if they do not do what is demanded. If they don’t comply, there is a suggestion that their suffering will be the others’ fault.

This can be the most subtle and confusing form of manipulation. There is a promise of what will be better if they comply. It sparks hope yet is still connecting a threat to the demand.

Read The Most Emotionally Intelligent Zodiac Signs: RANKED From Most To Least

As emotional blackmail goes, there can be a huge number of possible ways to go about it and it can be modified as per the doer’s intention and situation. But usually, there happens to be a constant recurrence of the following signs of blackmailing which are just as basic as they are common.

Forever in awe of mountains and its call. On my way to fight the fights and reach the heights.View Author posts