Chasing the Narcissist: Why You Need To Stop 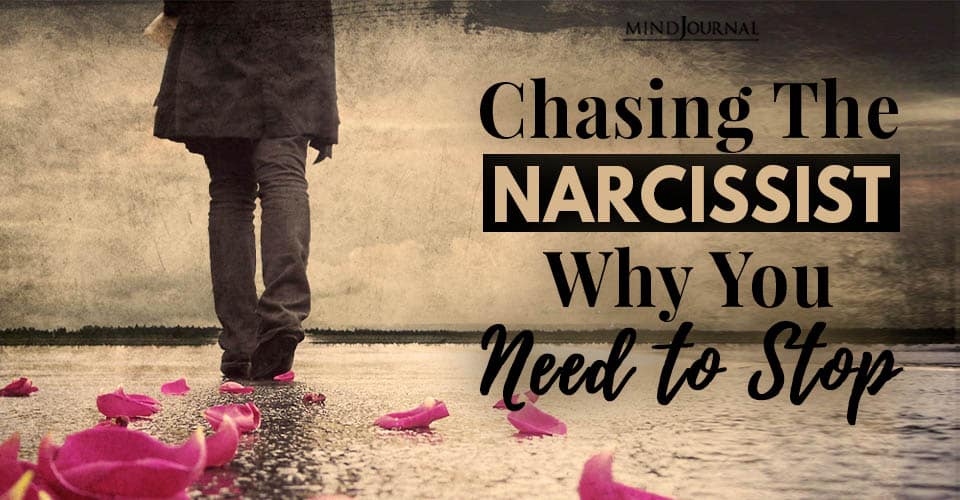 Chasing the narcissist and trying to make them come back in your life with the hopes of them loving you back is only going to end up hurting you more.

Back in our parents’ day, men chased women. Women had the goods, men wanted the goods, so they pursued. That’s just the way it was. Times are very different now, the need to pursue is simply, just, antiquated thinking. “The goods” are a lot more easily acquired and with the simplicity of finding a mate online, you can pick and choose which relationships you want to put your energy into.

A male friend of mine, who is in his mid-30’s, had been chatting with a woman online and they were making plans to meet for the first time. He lived right downtown and she lived in the west end. When he proposed that they meet somewhere in the middle, she quickly replied that if coming to her end was going to be a problem, then they might as well not bother. He responded with, “Ok,” and never contacted her again.

He explained that he’s not interested in a princess, who expects to have everything done for her. He wants someone who’s autonomous and pulls their own weight. As we move closer to equality, this is the new normal and definitely a more progressive way of thinking.

Chasing, while in a relationship, is something that needs to become a thing of the past as well. In dysfunctional relationships you often see one partner blowing hot and cold and the other writhing in agony, begging for their return. There needs to be a mental shift, where if someone walks away from you, you not only show them the door, you close it, lock it and throw away the key.

You know you are part of a dysfunctional relationship when the ending of it completely destroys you.

That’s not to say ending a relationship shouldn’t hurt, that you shouldn’t feel a vast array of emotions, but it shouldn’t have you abandoning yourself, contemplating suicide, and acting out in ways that are harmful to your well-being.

When you chase after someone that has tossed you aside, it’s not empowering and you, along with the other party are not treating you as a person of value. If someone doesn’t value you and behaves in that manner, you should simply not engage with them. Period. It makes absolutely no sense to stick around and try to change someone’s mind about you. If they devalued you once, they’ll do it again. Those who know their worth, simply walk away from people that mistreat them.

The same holds true when you take someone back after they’ve hurt and abandoned you. Some people may not be physically chasing you, but if you’re just so damn grateful that they’ve come back, that you leave the door wide open, no questions asked, you’re in the same boat.

You can’t control whether or not someone leaves you the first time, but if you give them another opportunity, then you’re making a conscious choice and it’s on you.

If you have to convince someone you’re worth it, it’s already over.

When someone has shown you that they don’t care about your suffering, that has to be the line – you can’t go back – you cannot keep forgiving that kind of behavior. Once someone has broken your trust, it’s gone and it will never be the same.

Consider also, the effectiveness of the action of begging someone to return to you. If you’re involved with a Narcissist or a Psychopath, you’re appealing to someone whose ability to feel empathy is either non-existent or severely impaired. You’re looking at them woefully with tears in your eyes, begging them to take away your pain, but they cannot compute what you’re trying to tell them, or what you’re going through.