How You Can Change Your Emotional Habits 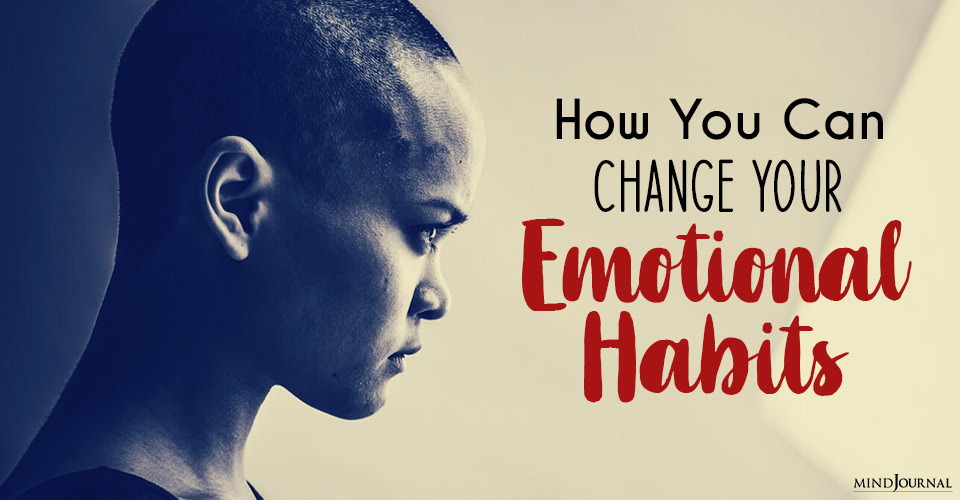 Your life is a reflection of your emotional and mental habits. Sometimes, many unresolved and painful emotions that you feel deep inside yourself manifest in the form of toxic emotional habits.

What we choose to focus on determines in large part the meaning of our lives. We know neurologically that mental focus amplifies and magnifies — that is, makes the object of focus more important than what we don’t focus on.

Due to the brain’s proclivity to form habits, the repeated focus eventually yields rigid sequences of conditioned responses, which we experience as habits. These shape the day-to-day experience that forms the fabric of our lives by default.

Because habits are processed in the brain thousands of times faster than intentional behavior, the only reliable way to change an entrenched habit is to develop a new one that is incompatible with the one you want to change.

If you want to change the habit of yelling at your kids, develop a habit of modeling emotion regulation for them, which will be incompatible with yelling at them.

I use a process called TIP — think, imagine, practice — to develop new habits. For example, my client is in the habit of resenting his wife for disagreeing with him. In our session, he thinks of times when he’s felt kind and recognizes that he really likes himself better at those times. He imagines himself doing things that will bring those feelings to life, such as wishing his wife happiness and well-being.

At home he practices fostering her well-being, treating her with respect, cherishing her. Repeating this association — resentment with kindness — several times a day for about six weeks develops a conditioned response, such that when he starts to feel resentful, he thinks and acts kindly. He becomes tolerant of disagreement and even learns something from the perspectives with which he disagrees.

Whatever emotional habit dogs you, it likely has generalized triggers

Anything that makes you feel devalued, isolated, or attacked. Over time, the mental states themselves – powerlessness, vulnerability, worthlessness, etc. – trigger habitual responses such as anger, aggression, drinking, overeating, workaholism, independent of the original causes.

Therefore, we must develop general responses to general mental states, rather than to the specific triggers of the mental states. The approach is like building the immune system against all pathogens rather than concentrating on a specific one.

Related: How To Use Your Emotional Triggers For Your Personal Growth

Most Compassion, Power clients have formed habits of empowering themselves against vulnerable mental states with some kind of aggression, a habit which, of course, must be changed for the health, safety, and well-being of the entire family.

The steps of TIP are:

Think repeatedly about the desired change and write it out. (Example: “When she says I’m selfish, I’ll allow myself to care that she’s hurt and show her that I care.”)

Imagine in detail how to overcome any barriers (usually guilt, shame, anxiety) to the desired change. (Example: “I feel guilty about having been selfish in the past, but caring about her and feeling connected to her are more important, so I’ll try to focus on what’s most important to me – showing her that I care.”)

Practice the specific behaviors likely to lead to the desired change.

Related: 5 Ways To Spot Emotional Triggers and How To Deal With Them

To apply TIP to your own undesirable habits, examine several instances of the habit and then:

With practice, your brain will automatically replace states of vulnerability like guilt, shame, or anxiety with more deeply empowering, solution-oriented states, which will allow you to act in ways that make you feel consistently more valuable.

Being an emotional person is not a bad thing at all, but when certain emotional habits end up hurting your loved ones without any fault of theirs, then it is time for you to understand what is happening, and then work on it accordingly. Shifting your emotional habits from a negative place to a positive one is what you need to do.

Steven Stosny, Ph.D., is the founder of CompassionPower. His current book is Empowered Love, and his previous books include Soar Above: How to Use the Most Profound Part of Your Brain Under Any Kind of Stress, Living and Loving after Betrayal, How to Improve your Marriage without Talking about It: Finding Love Beyond Words, Love without Hurt, The Powerful Self, and Treating Attachment Abuse. Dr. Stosny has treated over 6,000 clients for various forms of anger, abuse, and violence, and is also an advisor of the Prince Georges County Circuit and District courts on domestic violence. He has appeared on “The Oprah Winfrey Show,” “The Today Show,” “CBS Sunday Morning,” many CNN shows, and in the New York Times, Washington Post, U.S. News & World Report, WSJ, Esquire, Cosmopolitan, O, Psychology Today, USA Today. He has taught at the University of Maryland and at St. Mary’s College of Maryland. His blog on Psychologytoday.com has over 18 million views.View Author posts