How To Identify Your Emotional Triggers (Before It’s Too Late) 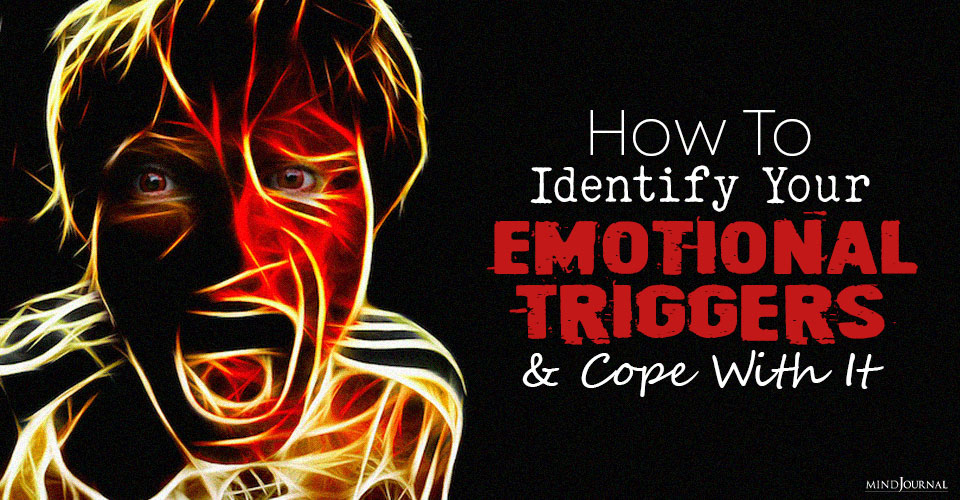 Do certain topics or situations evoke uncontrollable emotions in you? Emotional triggers can hit us all of a sudden and make us behave in extreme ways. However, there are some ways to spot emotional triggers before you start feeling uncomfortable.

You’re in a friendly, normal conversation with another person. Everything is going well until – BAM! Your blood pressure is rising, you’re starting to hyperventilate, and you have the distinct urge to strangle the other person.

Even though the other person made a blasé passing comment, you find yourself trying to prevent yourself from screaming down their throat and gouging out their eyes.

You got triggered – that’s what happened.

Reflecting on the situation later, you might have realized just how disproportionate your rage was, and how uncomfortably strange your reaction felt.

Almost all of us have some kind of trigger or “hot button,” that, when pushed, sets us off into a tirade of anger, hostility, fear, or resentful behavior. However, some of us are more skilled at dealing with these triggers than others.

If you’re a person who feels like a matchstick just waiting to be ignited by anyone, you might have a problem with your emotional triggers.

Related: How To Deal With Heightened Emotions When You Are An Empath? 5 Tips

What Are Emotional Triggers?

Emotional triggers are people, words, opinions, situations, or environmental situations that provoke an intense and excessive emotional reaction within us. Common emotions that we experience while being triggered include anger, rage, sadness, and fear.

Virtually anything can trigger us, depending on our beliefs, values, and earlier life experiences such as a tone of voice, a type of person, a particular viewpoint, a single word – anything can be a trigger.

Why Do We Get Emotionally Triggered?

What is the psychology behind triggers? We suffer from emotional triggers for three main reasons:

When we are strongly identified with a certain belief, we may find it hard to be tolerant of other opposing beliefs. For example, there’s a reason why religion is such a triggering topic for so many people: beliefs give us a sense of safety and comfort, and when they are challenged, we feel (from an emotional and psychological standpoint) like our lives are being put in danger.

Values stem from beliefs and involve what we hold as important in life. When another person disagrees or challenges our values, we get triggered because they are calling into question the truth and legitimacy of what we hold dear.

Getting “triggered” is a term that traces back to the experiences of post-traumatic stress disorder (PTSD) often experienced by soldiers coming back from the war. When we are triggered due to past traumatic experiences, our reaction is often extreme fear and panic (or in some cases, anger). We get triggered when we see, hear, taste, touch, or smell something that reminds us of the previous traumatic circumstance.

Related: How To Turn Your Painful Emotions Into Superpowers

The ego is the sense of self or “I” we carry around. This artificial identity that we carry is composed of thoughts, memories, cultural values, assumptions, and belief structures that we have developed in order to fit into society (read more about the ego).