7 Steps To Change Your Narcissistic Responses 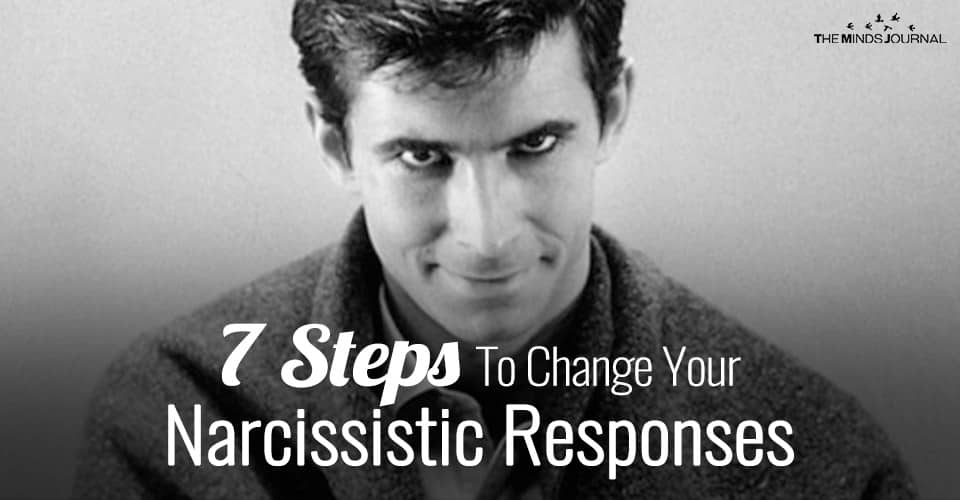 Narcissism like many other mental disorders is a complicated one to understand. The easy way would be to dismiss them altogether thinking that they will never change. But like every other mental illness, this is also curable. As long as they go to therapy, and are determined to control their narcissistic responses, there is light at the end of the tunnel.

“Underneath the so-called narcissistic personality is definitely shame and the paralyzing fear of being ordinary.” — Brené Brown

7 Steps to Changing Your Narcissistic Responses

There’s a better way to deal with the issues that trigger your rage.

The common “wisdom” is that narcissists do not want to change. When I tell people that I work with a number of clients who have Narcissistic Personality Disorder, they say, “Why? They aren’t really interested in psychotherapy.”

The truth is that while many narcissists are not ready to do psychotherapy because they find it too painful to take a close look at themselves, some people with Narcissistic Personality Disorder actually do want to change. I know this because the more motivated ones stay in therapy.

It is not easy for them to admit their flaws, deal with their underlying shame, and do the hard work necessary to create a healthier way of functioning. Their therapy is not easy for me either: I sometimes become the object of their rage. When they are not idealizing me or pretending to be nicer than they actually are, they are devaluing me. I have had to get used to being yelled at when something I say or do “triggers” them. But when the therapy works, it is all worth it.

Read : How To Know If You’re Dating a Narcissist

My narcissistic clients come to therapy and tell me things that they admit to no one else:

“Narcissism has more in common with self-hatred than with self-admiration.” — Christopher Lasch

What Is Narcissistic Personality Disorder?

If you are reading this because you think that you may be narcissistic and are looking for a way forward, I want to assure you that there is a path you can take. Narcissistic Personality Disorder can be looked at rather simply as an adaptation to a childhood home environment that left you with unstable self-esteem, low emotional empathy, and a particular set of coping skills that have now become automatic and habitual.

As with any habit, your narcissistic responses are now encoded in your brain as a series of neuronal connections that fire together automatically in certain situations. You can choose to learn new coping skills that you like better. With continued practice, the new, non-narcissistic strategies will eventually replace the old narcissistic ones. Most of us regularly update our computer apps and our smartphones but do not think to update our coping strategies.

Read : The Narcissist In Court: What You Need To Know

Choose What You Want to Change

Here is a simple seven-step plan you can use on your own that is based on what has worked for many of my narcissistic clients. It is very important that you be the one who chooses which issues to work on. People around you may be suggesting lots of things that they wish you would do differently because those behaviors hurt them. I understand that, but you have to do this for yourself, not for them. For the moment, you have my permission to ignore everyone else’s input. To succeed, you have to begin with something you care about deeply. It has to be a behavior that impacts you negatively in some way. That will keep you motivated.

1. Identify the “triggers” for the behavior that you want to change.

“Triggers” are situations, words, or behaviors that arouse strong negative feelings in you. People with narcissistic issues tend to overreact when they are “triggered” and do things that they later regret.

Bob was a screamer. When he got “triggered,” he loudly expressed his displeasure by publicly devaluing the person whom he held responsible. Bob’s initial goal was to stop screaming in public whenever he got angry at someone. He was tired of making scenes and then feeling embarrassed about it later. Some common triggers for Bob were:

Get a notebook: You will need a small notebook or a place on your smartphone where you can keep the information that you are gathering available to you throughout your day.

“There’s a reason narcissists don’t learn from mistakes and that’s because they never get past the first step which is admitting that they made one.” — Jeffrey Kluger

Start to identify the situations in which you are most like to get triggered. Write them down as well.

3. Identify the behaviors you want to change.

Identify the behaviors you engage in when you are triggered that you would like to change. Make a list of them next to the situations that cause you to react that way.

“Your beliefs don’t make you a better person. Your behavior does”.— Shukhraj Dhillon

Think about how you would ideally like to react when you are triggered instead of how you have been reacting. Write that down.

Practice inhibiting or delaying your normal response when triggered. Your “normal” response is the now unwanted one that you do automatically. It has become wired as a habit into the neurons of your brain. You have done it so often that your brain can do it very quickly. Here are some ways to calm yourself down and delay your response:

Once you can delay or inhibit your old, and no longer desired, response to the “trigger,” substitute your new response. Each time that you are able to inhibit the old response and do the new one instead, put a checkmark that means “Success!!” next to the behavior on your list.

Read : Why Do You Keep Attracting Narcissists and How to Avoid Getting Involved With Them

Example: Lara and her family

Lara loved her husband and children but often found herself exasperated with them. She took it personally whenever they did anything that displeased her. In the moment, it felt to her as if they were doing things wrong just to be mean to her. She responded by loudly cursing them out and calling them names. Her husband once darkly joked that after he was dead and buried, Lara would have “How could you be so stupid?!” engraved on his tombstone.

Lara’s parents had called her names, like “fat” and “stupid,” whenever they were displeased with her. It had ruined her childhood, and she had sworn that when she had her own family, she would never humiliate them. Unfortunately, every time that Lara got mad at her husband or one of her kids, she found herself loudly disparaging them in almost the same words that her parents had said to her.

Lara’s goal: Stop calling her family hurtful names when she gets angry.

Lara’s new response: “I want to just say that I am disappointed and angry and wish that they had not done that.”

Needless to say, this new response did not come easily to Lara. One of the ways that I helped her was to role-play the situation with her. I would play her husband or one of her kids and pretend that I had done something that was a trigger for Lara’s rage. Lara would practice responding in her new way over and over again. The first time that she came back to therapy and reported that she had gotten mad without resorting to name-calling, we both celebrated her first checkmark.

“You yourself have to change first, or nothing will change for you!”

Imagine different scenarios: Many top athletes are trained by their coaches to visualize in great detail how they want to perform in their sport. They run through the whole thing repeatedly in their mind, until their perfect performance is deeply ingrained in their brain. You can do something similar to the above to change your response to your triggers.

Picture one of the typical things that gets you furious. Picture the other person’s face and what they are saying or doing. Then imagine yourself responding with your new ideal response. Do this over and over. Then pick another thing that typically triggers this same undesirable response. Visualize that scene in detail with you doing your new ideal response instead of the old one. Do it over and over again. Keep going until the new response starts to feel normal.

Read : How Narcissistic Abuse Changes You

7. Review your successes and areas to improve.

Choose a time period that feels right to you, either the end of each day or once per week, to review your successes and where you need to focus more.

Note: Rewiring your brain takes time. Be patient and kind to yourself. This will not happen overnight. You have to be persistent and keep going. If you do this diligently every day, by the end of 90 days (if not before), you should see positive changes.

Some failures are inevitable. This is like learning a musical instrument or a new athletic skill. You would not expect to do either perfectly right away.

Narcissism is not going to go away anytime soon and hoping that it will only bring disappointment. But, kudos to them who know where they are going wrong and are actively taking steps to change their narcissistic responses. The best way to recover from a thing like this to acknowledge it and work towards eradicating it. Don’t let your narcissistic responses drive away from the people that love you.

Punchline: Narcissistic behaviors are mainly habits that we learned during childhood. Habits can be changed with planning, diligence, and effort. Good luck!

Changing their narcissistic responses can go a long way in countering their bad behavior.

This video might be helpful for people looking to change their narcissistic responses: