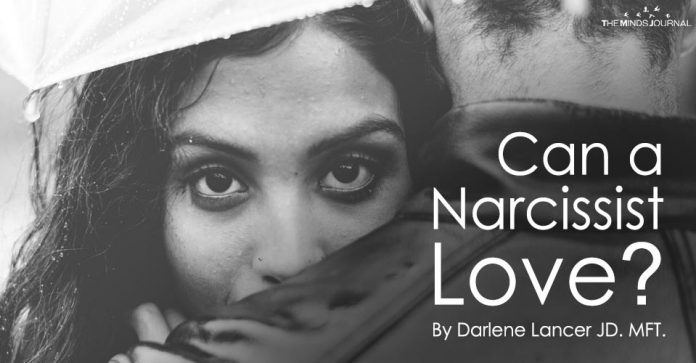 Can a Narcissist Love?

Anyone who’s loved a narcissist wonder, “Does he really love me?” “Does she appreciate me?” They’re torn between their love and their pain, between staying and leaving, but can’t seem to do either. Some swear they’re loved; others are convinced they’re not.

It’s confusing because sometimes they experience the caring person they love, whose company is a pleasure, only to be followed by behavior that makes them feel unimportant or inadequate. Narcissists claim to love their family and partners, but do they?

Narcissists may show passion in the early stages of dating. But that sort of passion, according to Jungian analyst Robert Johnson, “is always directed at our own projections, our own expectations, our own fantasies . . . It is a love not of another person, but of ourselves.” Such relationships provide positive attention and sexual satisfaction to support a narcissist’s ego and self-esteem. For most narcissists, their relationships are transactional. Their objective is to enjoy uncommitted pleasure. (Campbell, et al., 2002) They’re playing a game, and winning is the goal. They’re engaging and energetic and possess emotional intelligence that helps them perceive, express, understand, and manage emotions. (Dellic, et al., 2011) This helps them manipulate people to win their love and admiration. They brag to be respected, loved, and gratified. Additionally, their good social skills allow them to make a good initial first impression. They can show great interest in romantic prospects and seduce with generosity, expressions of love, flattery, sex, romance, and promises of commitment. Amorous narcissists (Don Juan and Mata Hari types) are adept and persuasive lovers and may have many conquests, yet remain single. Some narcissists lie and/or practice love–bombing by overwhelming their prey with verbal, physical, and material expressions of love.

Narcissists lose interest as the expectation of intimacy increases or when they’ve won at their game. Many have trouble sustaining a relationship more than six months to a few years. They prioritize power over intimacy and loathe vulnerability, which they consider weak. (See Lancer, 2014) To maintain control, they avoid closeness and prefer dominance and superiority over others. Game-playing thus strikes the perfect balance to both get their needs met and keep their options open to flirt or date multiple partners. (Campbell, et al.)

A sudden breakup can be traumatic to their ex, who is bewildered by their unexpected change of heart – proposing one minute and then exit the next. They feel confused, crushed, discarded, and betrayed. If the relationship had continued, eventually they would have seen through the narcissist’s seductive veneer.

Some narcissists are pragmatic in their approach to relationships, focusing on their goals. They may also develop positive feelings toward their partner, but more based on friendship and shared interests. If they marry, they lack the motivation to maintain their romantic façade and employ defenses to avoid closeness. They become cold, critical and angry, especially when they’re challenged or don’t get their way. They’re likely to support their spouse’s needs and wants only when it’s inconvenient and their ego is satisfied. After devaluing their partner, they need to look elsewhere to prop up their inflated ego.

How is love defined?

Real love is not romance, and it’s not codependency. For Aristotle and St. Thomas Aquinas, it’s “to will the good of another.” In The Psychology of Romantic Love, Nathaniel Branden states that “To love a human being is to know and love his or her person.” (1980, p. 50) It’s a union of two individuals, which requires that we see another person as separate from ourselves. Further, in The Art of Loving, Erich Fromm (1945) emphasizes that love entails the effort to develop knowledge, responsibility, and commitment. We must be motivated to know another’s wants, needs, and feelings and provide encouragement and support. We take pleasure in their happiness and try not to hurt them.

When we love, we show active concern for their life and growth. We try to understand their experience and worldview though it may differ from ours. Caring involves offering attention, respect, support, compassion, and acceptance. We must devote the necessary time and discipline. Romantic love can evolve into love, but narcissists aren’t motivated to really know and understand others. (Ritter, et al.2010)

According to the Diagnostic and Statistical Manual of Mental Disorders, narcissists lack empathy. They’re “unwilling to recognize or identify with the feelings and needs of others.” (APA, 2013) Research shows that they have structural abnormalities in brain regions associated with emotional empathy. (Schulze, et al. 2013) Hence, their ability to appropriately respond emotionally and express care and concern is significantly impaired.

Narcissists have several hurdles to loving. First, they neither see themselves nor others clearly. First, they experience people as extensions of themselves, rather than separate individuals with differing needs, desires, and feelings. Second, they overestimate their own emotional empathy (Ritter, et al). Third, their defenses distort their perceptions and interactions with others. They brag and withdraw to control closeness and vulnerability, project onto others unwanted, negative aspects of themselves, and they use denial, entitlement, and narcissistic abuse, including blame, contempt, criticism, and aggression, to ward of shame. Perfectionistic narcissists callously put down others and may attempt to destroy adversaries in order to sustain their illusion of perfection. (Lancer, 2017) All these issues impair narcissists’ capacity to accurately take in another person’s reality, including that person’s love for them. In fact, narcissists emotional intelligence helps them manipulate and exploit others to get what they want, while their impaired emotional empathy desensitizes them to the pain they inflict.

Can we measure love?

Love is difficult to measure, but research shows that people feel love expressed by: 1) words of affirmation, 2) spending quality time, 3) giving gifts, 4) acts of service, and 5) physical touch. (Goff, et al. 2007) Another study revealed that participants also felt loved by a partner who: 1) showed interest in their affairs; 2) gave them emotional and moral support; (3) disclosed intimate facts; 4) expressed feelings for them, such as “I’m happier when I’m near you;” and 5) tolerated their demands and flaws in order to maintain the relationship. (Swenson, 1972, p. 92)

People who love narcissists are starved for many of these expressions of love. Sometimes, narcissists are remote, dismissive, or aggressive; at other times, they show care and concern and are helpful. It’s not that narcissists are incapable of feeling or even intellectually understanding someone’s feelings. The problem appears to be rooted in childhood trauma and physiological deficits that impact emotional assessment, mirroring, and appropriate empathic expression. (Unconscious or unexpressed: “I love you, but”); Expressed: “I’m too busy to come to the hospital,” sounds pretty cold, but may not reflect the narcissist’s love for the person hospitalized. When the importance of a visit is explained to them, they might make the trip.

They may show love when they’re motivated. Their love is conditional, depending upon impact on the narcissist. My book, Dealing with a Narcissist explains in detail how to navigate and beneficially use this in relationships with narcissists, addicts, or anyone highly defensive. Because narcissism exists on a continuum from mild to malignant, when it’s severe, selfishness and inability to express love become more apparent when greater demands are placed on a narcissist. Dating or long-distance relationships that have fewer expectations are easier.

Bottom line: Wondering whether a narcissist loves you is the wrong question. Although it’s wise to understand a narcissist’s mind, like Echo in the myth of Narcissus, partners overly focus on the narcissist to their detriment. Instead, ask yourself whether you feel valued, respected, and cared about. Are you getting your needs met? If not, how is that affecting you and your self-esteem and what can you do about that?