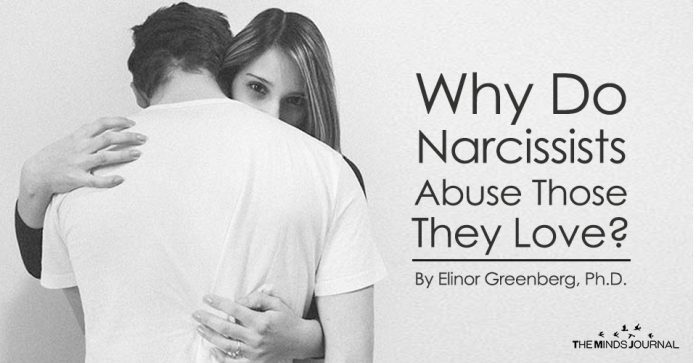 Why Do Narcissists Abuse Those They Love?

Have you ever been a victim of narcissistic abuse?

Why Do Narcissists Abuse Those They Love?

How to understand and predict narcissistic abuse.
By Dr. Elinor Greenberg

One of the most difficult things to understand in life is how someone who professes to love you can then go on to abuse you.

People feel traumatized and confused after a romantic relationship with an abusive narcissistic partner ends. They wonder,  “We were so in love, yet he went from telling me that I was the love of his life to treating me like garbage. He cheated on me. He devalued me. He embarrassed me in front of our friends. How can I trust anyone again, if I so badly misjudged this person?”

Anyone who has been abused by a narcissistic partner may wonder how they could have made such a big mistake — and how they can avoid making it again in the future.

The good news is that most people with Narcissistic Personality Disorder are very predictable. They tend to follow the same relationship pattern again and again.

And, contrary to common perceptions about narcissists, most are not especially devious. Narcissists continually signal that they are narcissists. You can learn to recognize the early signs that a new partner is a narcissist by paying close attention to how they behave toward you at each stage of your relationship. Then it is up to you to decide if you want to continue.

Why Are Narcissists Prone to Being Abusive?

When people have a Narcissistic Personality Disorder, two things interact to predispose them to be abusive:

1. They are low on emotional empathy.

Having emotional empathy decreases the likelihood that you will want to hurt others because you will literally feel some of their pain. Without emotional empathy, you have less motivation to pay attention to the pain that your words and actions cause a partner.

It requires that you stop and think about what the other person might feel in response to your actions. Narcissists, therefore, can understand that they may be causing someone pain, but they have less motivation to care because they are not feeling anything negative themselves.

One of the main reasons that people abuse others whom they profess to love is that they lack whole object relations and object constancy.

Briefly defined: “Whole object relations is the capacity to see oneself and other people in an integrated and realistic way as having a mix of good and bad qualities, some that you like and others that you dislike.”

If you have whole object relations, you can accept that someone is not perfect and still value that person for the positive qualities he or she has. “Object constancy” is the ability to maintain your positive emotional connection to someone whom you care about while you are feeling angry, frustrated, disappointed, or hurt by that person.

Object constancy helps you rein in your impulses to hurt someone during a fight. Lacking it makes people more willing to emotionally and physically damage their mate.