Why Empaths Attract Abusive People And How To Stop It. 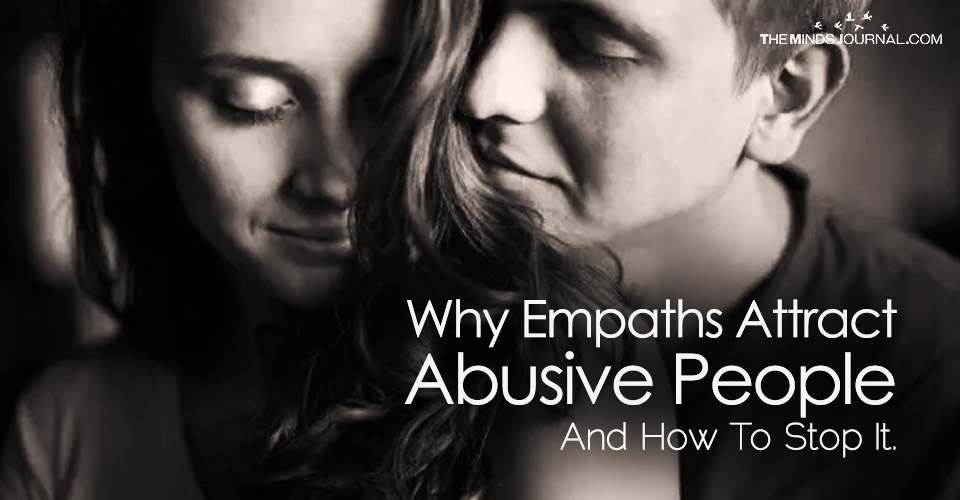 Empaths like to help people. They try to see the best in people. They give people the benefit of the doubt. They take responsibility for their actions and apologize when they find they’ve hurt someone. They believe that other people are good, decent, and fair, too.

Those are good things, right?

Empaths run into problems when they connect with people who have goals, motives, and patterns of behavior that are entirely foreign to them. They may be driven by a need for money, power, or attention. They place their needs above everyone else’s. They don’t apologize because they don’t think they ever do anything to apologize for. If someone gets hurt in the process of their getting what they want, that’s just the price of doing business.

While not all others are psychopaths, sociopaths, or narcissists, enough of them are that it doesn’t hurt to approach all of them with equal caution. If your empathic self becomes involved with one of these others – as a potential partner, friend, coworker, boss, or even a family member – you’re setting yourself up to be abused, misused, or just generally treated badly.

Read What Is Hyper Empathy Syndrome? 12 Symptoms and How To Cope

If empaths believe – or are lead to believe – that others are upset, angry, hurt, or even abusive because of something they did or didn’t do, the empaths will take on the responsibility for fixing it.

The empaths effectively absolve the others of all responsibility for anything they do by blaming themselves.

The others are more than happy to let them do that. Even when confronted with their bad behaviors, they’ll twist whatever happened around so the empaths appear to be the ones at fault.

What a deal…for the others.

Read The Saviour Cadre of Empath and Why Narcissists Treasure Them

So, empaths, let’s get a grip.

They are not like us. They are not nice people, they do not feel responsible for how they act, and they are not fixable.

Once we resign from our self-assigned positions as “Managers of the Universe” and give responsibility back to those from whom we’ve taken it, we won’t attract those others anymore.

I have lots of quirks, some officially diagnosed, some functionally self-diagnosed, and some seemingly inherited predispositions. I believe that nature and nurture or the lack thereof have conspired to create the sensitive, empathic, emotional, hyperactive, easily distracted, compulsive, silly, easily hurt, strong-willed, contrary, inquisitive, annoying, unpredictable, and loving person I am today.View Author posts