6 Signs He Will Break Your Heart 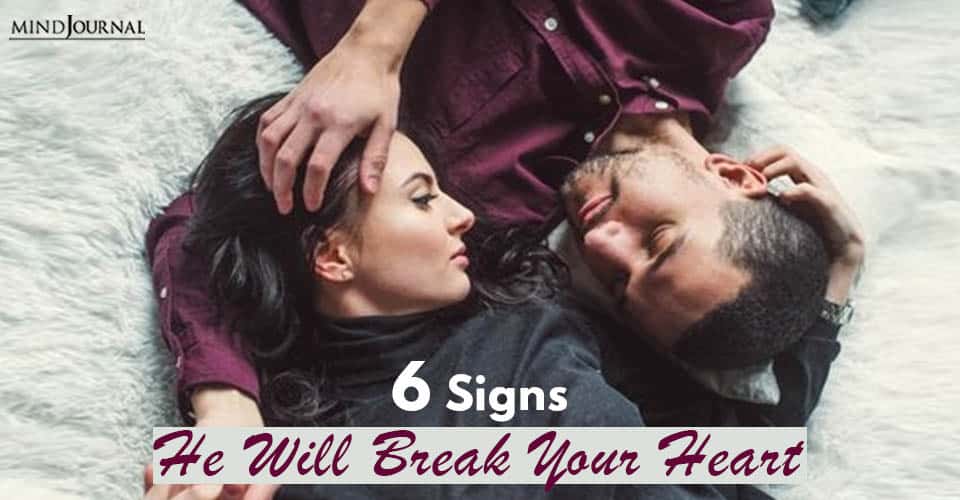 Not every guy is the same, and not every guy is going to treat you the way you deserve to be treated. If you are dating a guy who shows certain shady signs, then know that he will break your heart, and it’s just a matter of time.

There are some things in life that everyone loves to believe will never happen to them. For instance, everyone believes they are too smart to be in an abusive relationship or a toxic one. Everyone likes to believe that they are strong-willed and self-respecting enough to dump their partner when they see The Signs.

First, you won’t see the signs by yourself. Secondly, even if you see them, you will convince yourself that there are justified reasons for them. Thirdly, even if you reach the conclusion that there is something obviously wrong, you will find out that you are not willing to let go of the companionship that you have grown so used to and comfortable with — especially if you have been in it for too long.

This is why, it is really great that you are here, because here is what: there is really nothing you can do about it. You just have to get past this and grow up stronger and smarter than you thought you were.

Meanwhile, if you haven’t reached there yet or don’t even believe this can be you.

Here are the signs to watch out for. If you hit even one of these, be prepared for a possible heartbreak in the future.

Here Are 6 Signs He Will Break Your Heart

1. He won’t introduce you for who you are i.e. his girlfriend.

No shocker, right? A man who is there for a temporary fix knows it in his heart and hence, will act accordingly. He will casually call you his friend — and if confronted about it, might pass it off as a mistake or a light-hearted joke. A man who is serious about you won’t do this. He will know how precious you are and will not step back from claiming you as his significant other.

A man with cold-feet will also avoid meeting your parents at almost any cost. He will not want to go through the pressure of being someone he knows he is not going to be — i.e. the dreaded son-in-law.

Similarly, he will also keep you from meeting his parents because, again, why go through something unnecessary?

Related: How To Spot A Man Who Breaks His Promises and What To Do If You’re Dating One

Always listen to a man when he declares something. Always.

Believe him, that’s your only job. If a man tells you his setbacks as a person and a partner, listen to him. He is definitely not going to change his mind if he already told you that he is not looking for a serious relationship when you began. Believe him when you find yourself hopelessly smitten and he tells you he is not ready to take the leap.

3. He’s in touch with exes or is in a relationship with someone else.

Really. Being civil is one thing, but being too friendly is something else. A man who isn’t serious about you will knowingly maintain a wide door policy hoping for better options to come along.

In the same vein, never trust a man who is already in a comfortable relationship that he refuses to end. He is another one who is never going to be serious about you — and chances are he must have told you so in the beginning. Good thing we have already established that one should always listen when he is disclosing/declaring something.

4. He is never making as much of an effort as you are.

You know it when you do. You are always the one making up plans. The one fixing everything between you. Although, don’t be fooled by the fantasy-plans — the ones where he vaguely promises you things or outings without really setting a sure date upon it. Those are specifically laid down to throw you off his trail if you have begun to grow suspicious of his seriousness for you.

Him never prioritizing you enough is never a good sign either. Especially when you are going around being the most flexible, wonderful girlfriend trying to make time and space for him in your schedule, plans, or life.

Related: 10 Signs He’s Not In Love, You Are Just Convenient

You will just know it in your gut when you cannot talk to him. It might not feel like a safe space where you can be open or vulnerable before him. When you do, he might not be as invested in your problem as you had hoped him to be. Or might just straight up not understand what it means to you — mostly because he is unwilling to spend his brain cells on someone who he knows is here today and gone tomorrow.

Alternately, when it is your relationship or something he did specifically, that you are trying to discuss, he will very convincingly tell you that you are overthinking. No one is allowed to call your speculations and worries ‘crazy’.

Let your sixth sense tingle and let the doubt creep in when he does this. You know he will break your heart if he aggressively hides his phone from you. You might also have a good idea about what you will find there. Well, girl, you are better than whatever it is on his phone. Be it Twitter, some ex or anything, and anyone at all. You better know it and walk away as soon as possible.

Related: 5 Telltale Signs You Are Being ‘Benched’ In Your Relationship

Spotting any of these signs is like spotting a rash. You know you have to get it checked and possibly brave a shot. The pain is a given whether you do it later or now. The only pro about doing it now is that it won’t worsen and you won’t have as much baggage as you would if you wait.

Yes, it is hard. Yes, it is sad. He might actually be a nice person in some cases, a keeper in fact. But simply accept that he is not the one for you to keep and just let him go before he breaks your heart into pieces and leaves you.