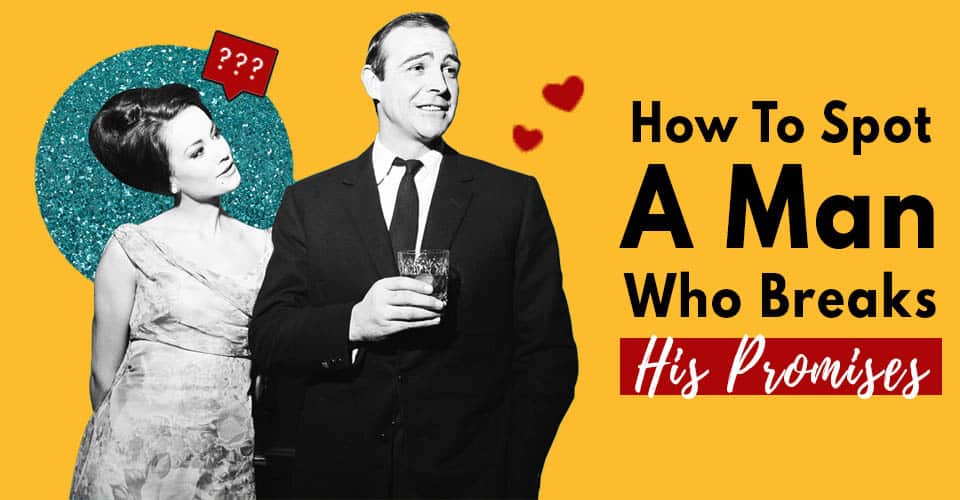 If you are with a man who breaks his promises left, right and center then you are just wasting your precious time with him. You might be hoping that he will change with time and get better, but most probably he won’t.

If you’ve been looking for your ideal man for any length of time, you’ve probably run into Mr. Broken Promises. You know the guy. He’s tall, handsome, charming, and he knows exactly how to talk to women.

He takes you on an amazing first date, he doesn’t leave you wondering, “Why isn’t he calling me back?” and he makes you smile in so many different ways. There’s one other thing this amazing man of yours does too. He makes huge promises to you. He talks about all the wonderful places he wants to take you. He tells you how he’s going to love you always and forever, and how you’re the most amazing woman he’s ever met.

The trouble with this guy is he never follows through on his promises. In fact, after a while of dating him, he stops returning your calls, he only comes to see you on his terms, and he starts making excuses for his bad behavior.

How you deal with Mr. Broken Promises determines how much of your life you waste, and how bad you feel when the whole fantasy of a relationship you’re in is over.

So how do you spot the signs of a man who breaks his promises?

Very simply, you do the exercise I’ve told you about many times before. When you start dating a man, he’s going to be on his best behavior. Men are like salesmen when you first meet them, and they’re going to say whatever they need to in order to close the sale. Here’s what YOU need to do…

You need to be looking for a guy who shoots within the 95%-100% range before you even think about committing. I guarantee you, any man who isn’t batting at least 50% in the first few weeks of a relationship, is going to be at around 10% once you get involved, and by that time it’s too late.

What should you do once you find out you’re dating Mr. Broken Promises?

You should get the hell out of the relationship and never look back. Don’t make the mistake so many women make, which is to start making excuses for him. If he’s breaking promises now, it’s only going to get worse. When a man is truly interested in a woman, no work situation, no money issue, and no illness are going to stop him from texting or calling you.

Don’t fall for his excuses. You’re going to end up becoming the booty call and nothing else. Remember, the time you waste on men who don’t deserve you and treat you like crap is a time you’ll never ever get back. All we have is time ladies. That’s all it is. How much of it are you prepared to waste trying to change a man who won’t be changed?

You’re better than that. And so is the lady, Sandy who emailed me a couple of days ago. But Sandy is in the situation so many women find themselves in. She’s got herself caught up in a never-ending cycle with Mr. Broken Promises. As you’ll hear in this podcast, hosted by my Head Coach, Gregg, and myself, Mr. Broken Promises in her story have some genuine reasons for being mixed up relationship-wise, but he still has no excuses for treating a woman badly.

This podcast will open your eyes to the reality of dating men who don’t follow through on their promises, as well as giving you practical advice for getting yourself out of the web of excuses destined to end in heartache.