How A Fuckboy Manipulates You Into Falling For Them 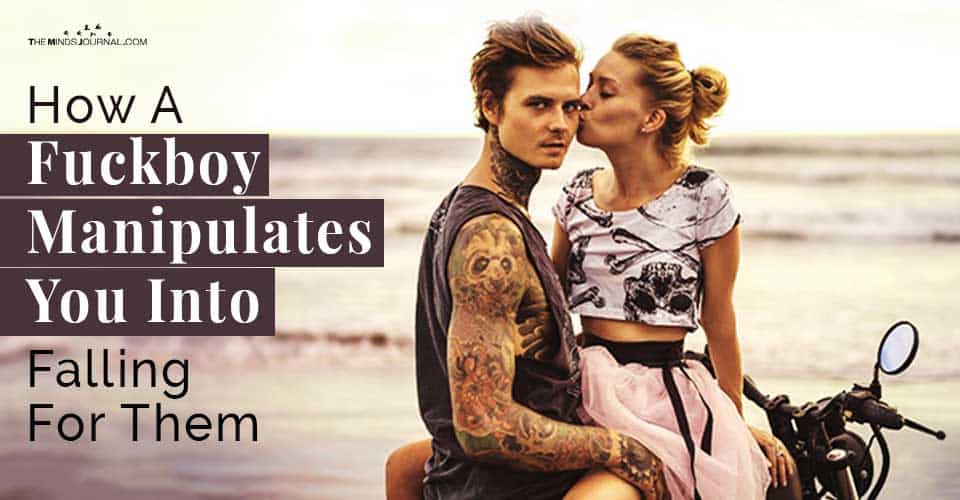 The keystone of dating a fuckboy is his desire to manipulate a girl for his own pleasure. Here’s how a fuckboy manipulates, if you find yourself falling for them!

A fuckboy. Someone who preys on people that he knows is going to fall for him and then dumps them immediately as soon as he gets enough of them or finds someone better.

A fuckboy will say all the good words written in the book just to catch your attention. But little did you know, it has been rehearsed and said a million other times — no wonder he’s already hustler about it.

So, Here’s How A Fuckboy Manipulates You Into Loving Them

He will do everything for you (in the beginning). He will bring you the places you’ve never been, and make you feel really special. He will promise you a life with him.

Related: 13 Ways Manipulators Use Passive-Aggressiveness To Manipulate and Abuse You

And all these make-you-feel-soooo-great words that are too good to be true.

Eventually, you can’t help but think, “Damn! What did I do to deserve a guy like this? Where have you been all along?”

That’s when a fuckboy is certain that he has done a good job. That’s when the smirk in his lips starts to form. That’s when he knows he executed stage 1 so effectively.

You’ve given your big ‘YES’ to him and he celebrated as if getting yes from people is the only thing that he can be proud of.

Because that’s how sick a fuckboy is. He wants to manipulate people into believing in him, trusting him, and giving him a space in your life. A fuckboy’s life goal is to make you happy first so he can make himself happier after that. So he can prove to himself that he can get whatever he wants just by charming people.

Then, of course, his behavior starts to change, you noticed. He keeps being aggressive with what he wants to get from you. Every kiss you make with him feels possessive, and every sexual topic he casually brings up in a conversation seems inappropriate and sort of disrespectful.

You don’t want to admit the thought that maybe the relationship is going to be based on sex solely. You make yourself believe that he is still the romantic guy you used to know.

Related: 12 Red Flags You Are Being Psychologically Manipulated

But alas, fuckboy will always be a fuckboy — there’s no changing him. He only likes to play games and have sex.

Fuckboy Manipulates You!!! You felt heartbroken, cheated, and manipulated by someone who falls under the definition of a fuckboy. You wasted your time looking for the wrong person.

You entertained a guy who only has a short-term vision for the future; a guy who looks at you as only ‘good for the moment’; a guy who in a twisted way considers people as disposable goods. You blamed yourself for ignoring that little warning inside of you to not take the risk with him.

We learn our lessons in the most painful way sometimes. Sure we fall in love with a wrong person, we make ourselves fools in the name of love, and we lose sight of the direction we set for ourselves before entering a relationship.

Because we want to experience living a life with someone special to share it with. And maybe because we’ve been lonely for way too long that we take the chance of jumping a boat with a guy like him. Even if there’s a possibility that we are going to be manipulated; even if that guy turns out to be a fuckboy.

Watch out this video if you want to know more about how manipulative fuckboys can be:

In the end, a fuckboy helps us grow.

A fuckboy manipulates you, hurts you but allows us to realize the kind of guy we deserve to have in our lives. A fuckboy is someone we used to know, but no longer has a place in our hearts.

So maybe it wasn’t really a bad fuckboy experience after all.

Maybe by getting our hearts shattered by a fuckboy, we know our worth and the standards that we need to set for our future relationships.

It’s never okay for someone to treat you with disrespect or to try to control you. You deserve to be in a relationship with someone who respects and supports you.

If you’ve had the fuckboy experience then share your thoughts in the comments below!