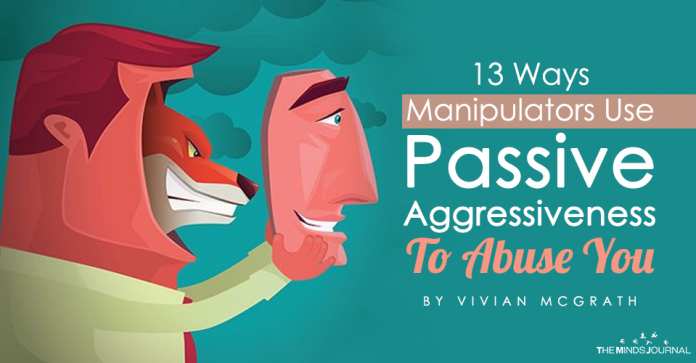 13 Ways Manipulators Use Passive Aggressiveness To Manipulate and Abuse You

One of my followers has asked me about this recently:

Passive aggressiveness is confusing as someone who behaves as this acts passively. But they are covertly aggressive and hostile.

Passive aggressiveness is a sign of insecurity.  It belies a deep sense of shame and low self-esteem.

A person who is passive aggressive needs to feel dominant and in control.  They also need to make others feel inadequate to relieve a feeling of deficiency within themselves.

They can be unreasonable, uncomfortable to be around.  They express hostility covertly and use manipulative subterfuge over time.

All designed to make you feel insecure, walk on eggshells and at times, to punish you.

They do this in a number of ways:

Sarcasm can be humor used as a weapon to hurt you.

Hostile humor that can be disguised as teasing you about your appearance, gender, cultural status or whatever personal to you.

If you get hurt or angry, they’ll say:

I was just kidding

And gaslight you by telling you:

This is where they’ll pick a fight out of thin air.  But it will be because of something you’ve said or done they blame as causing them to do this.  You’re responsible for their anger.

Or, they’ll be resentful and occasionally let nasty comments slip out.

This is a form of punishment aimed at creating insecurity within you.  It may be sullen resentment.  Social exclusion or neglect.

Not speaking to you for days, as punishment for their behavior you may have questioned.  So you become the problem, not them.  And they avoid accountability for it.

Negative criticism of anything from your appearance to how you talk.

Telling you your friends or family are no good for you.

But, then they’ll say:

I’m only trying to help you. Who else will tell you if I don’t

They may say negative things to others about you. Or, address you like a child.

This is all aimed at making you feel inadequate to relieve their own sense of deficiency.  For them to feel superior and in control.

Using tactics like gaslighting. Blaming you for their abusive behavior.

Lying to you, then telling you – you’re the one making things up.

Making excuses for their behavior to avoid responsibility for it.

Throwing unexpected things your way to always keep you on eggshells.

Making you feel guilty for their behavior

Holding you responsible for their moods and behavior. Their unhappiness and lack of success.

Expecting you to change your behavior so they don’t have to be accountable for theirs.

This is where they don’t say no.  But do everything to block things. There’ll be broken agreements, endless red tape and a lack of follow-through.

They’ll keep you thinking progress will be made, but covertly they’ll be stonewalling you.

Where they passively appear to be going along with you, but constantly come up with excuses or reasons why you can’t.

Which stalls progress or inhibits you coming to a decision.

This is where they undermine you in any way they can. They’ll ignore deadlines, sabotage projects.

Make you look like you’ve failed and you get the blame for it.

Again, this is about making themselves feel good, by crushing your self-esteem encouraging your insecurity.

10)  THREATENING TO HURT THEMSELVES

This is passive aggressive manipulation at its best. Threats such as:

If you leave me I’ll kill myself

The tactic is to teach you a lesson. Saying: I’ll hurt myself to hurt you.