Why Narcissists Behave The Way They Do 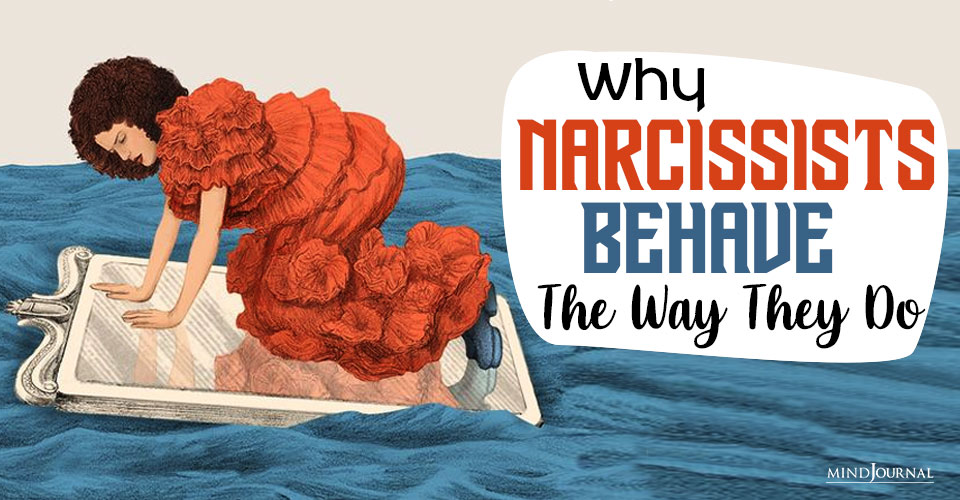 Having a sense of self-esteem is indeed an asset, but an inflated sense of self-importance and the tendency to monopolize conversations and belittle people are actually signs of narcissistic behaviors. If you want to understand the mind of a narcissist and the rationale for their confusing and crazy behavior read till the end.

The sudden silences. The periods of no communication when before the airwaves crackled with the send and return exchange of text messages. The repeated calls throughout the day to talk of something and to talk of nothing, now gone and empty.

The absence of a morning greeting. The absence of any greeting. Just absence. Cold and unremitting silences which stretch from hours to days, to weeks. What was once there has been banished.

What’s It All For? Perhaps The Narcissist Just Wants Some Time Alone?

The inability to ever say sorry. The frustrating failure to ever issue an apology, it is as if those words cannot be formed or do they manifest but something causes them to freeze so they never find the light of day?

The denial of fault, the deflection of blame, the resolute and forthright rejection of any accountability. All you want is to hear her say it the once, to say sorry, to hear that admission and sense some humanity exists there after all. What’s it all for? Perhaps she believes that I will think less of her if she apologizes to me?

The never-ending carousel of blame and accusation. The merry-go-round of that dizzying discussion that never reaches fruition. The whirling array of “I never said that”, “you do the same”, “you can’t keep accusing me” and so much more leaves you disorientated and nauseous.

Related: How Sharing Your Concerns Makes You Vulnerable To A Narcissist

Just once, just one time, can’t something be resolved without this round-the-houses farce? Must it always be this way? Why is nothing ever put to bed? Why is everything buried alive? What’s it all for? Maybe he just doesn’t understand me, perhaps I need to be clearer about what I mean?

The broken engagements. The no-shows. The promises to meet and then the failure to appear to leave you upset, annoyed, and miserable. He promised. He promised that this would not happen again. The frequent ringing and all you receive is the notification that the cellphone you are calling is not available right now. Where is he? Has he forgotten?

He cannot have done, you spoke to him only four hours ago to remind him of the arrangements, especially after what happened last time. You miss him and you were so looking forward to spending the night together after a period of not being able to do so.

Surely he should have remembered? The chasing messages “Where are you?”, “Are you near?”, “I have been waiting twenty minutes, where are you?”, “What’s happening, I am worried”. What’s it all for? Perhaps he has had to work late, or he is stuck on the subway or he has run out of charge for his ‘phone?

The repeated alterations to arrangements. The tears, the shouting, the disappointments, the rolling out of false explanations to try to ease their upset.

Yes, he did say he would take you out today, he must be caught up with something else, why don’t we do something instead? How can he let the children down like this? They turn up without agreement and demand to see the children. Forcing you into a corner in order to placate him so the children are not scared.

You back off again and again. Always you making the compromises. Always you trying to explain away the increasingly unexplainable. The arguments about the arrangements, the lies about what was arranged, the confusion over details. What’s it all for? Is he going mad? Maybe you are?

The insults and slurs, the nasty words, the harsh put-downs, and the savage comments. The vicious text message tirades sent at 3 am, the blistering verbal attack down the telephone, the dressing-down in person just before a night out. The personal cutting remarks, the swear words, the name-calling, and the labeling. So hurtful, so demeaning, so upsetting.