What is Narcissistic Abuse: 16 Signs To Identify And How To Protect 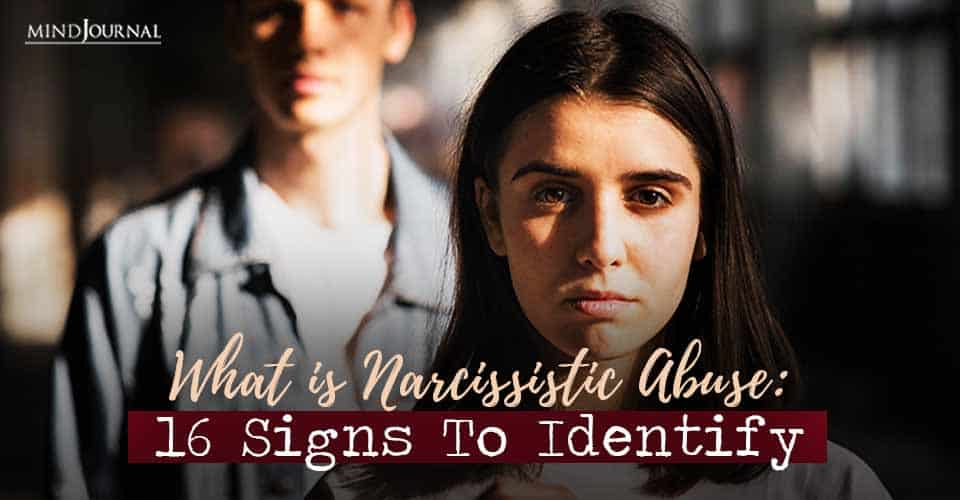 People who go through narcissistic abuse know how mentally crippling and psychologically draining it can be. Narcissistic abuse can single-handedly destroy your confidence, and happiness, and make you lose their faith in human decency. To say that it is horrible is an understatement.

Narcissists don’t really love themselves. Actually, they’re driven by shame. It’s the idealized image of themselves, which they convince themselves they embody, that they admire.

But deep down, narcissists feel the gap between the facade they show the world and their shame-based self. They work hard to avoid feeling that shame. This gap is true for other codependents, as well, but a narcissist uses destructive defense mechanisms that damage relationships and their loved ones’ self-esteem.

Many of the narcissist’s coping mechanisms are abusive–hence the term, “narcissistic abuse.” However, someone can be abusive, but not be a narcissist.

If you’re a victim of abuse, the main challenges for you are:

What is Narcissistic Abuse?

Abuse may be emotional, mental, physical, financial, spiritual, or sexual. Here are a few examples of abuse you may not have identified:

Note that many people occasionally make demands, use sarcasm, interrupt, oppose, criticize, blame, or block you. Consider the context, malice, and frequency of the behavior before labeling it narcissistic abuse.

Related: 19 Things A Narcissist Says and What They Really Mean

Generally, manipulation is the indirect influence on someone to behave in a way that furthers the goals of the manipulator. Often, it expresses covert aggression.

Think of a “wolf in sheep’s clothing.” On the surface, the words seem harmless – even complimentary; but underneath you feel demeaned or sense a hostile intent. If you experienced manipulation growing up, you may not recognize it as such. See my blog on spotting manipulation.

Emotional blackmail may include threats, anger, warnings, intimidation, or punishment. It’s a form of manipulation that provokes doubt in you. You feel the fear, obligation, and or guilt sometimes referred to as “FOG”.

Intentionally making you distrust your perceptions of reality or believe that you’re mentally incompetent.

Competing and one-upping to always be on top, sometimes through unethical means. E.g. cheating in a game.

Unnecessarily making comparisons to negatively contrast you with the narcissist or other people.

Disruptive interference with your endeavors or relationships for the purpose of revenge or personal advantage.

Using or taking advantage of you for personal ends without regard for your feelings or needs.

Related: Anxiety Disorders Could Be Caused By Being Exposed To Narcissistic Abuse

Persistent deception to avoid responsibility or to achieve the narcissist’s own ends.

Withholding such things as money, sex, communication or affection from you.

Ignoring the needs of a child for whom the abuser is responsible. Includes child endangerment; i.e., placing or leaving a child in a dangerous situation.

Ignoring your boundaries by looking through your things, phone, mail; denying your physical privacy, or stalking or following you; ignoring privacy you’ve requested.

Spreading malicious gossip or lies about you to other people.

This includes blocking your movement, pulling hair, throwing things, or destroying your property.