The Karpman Drama Triangle and How To Get Out Of The Cycle of Victim, Rescuer and Prosecutor 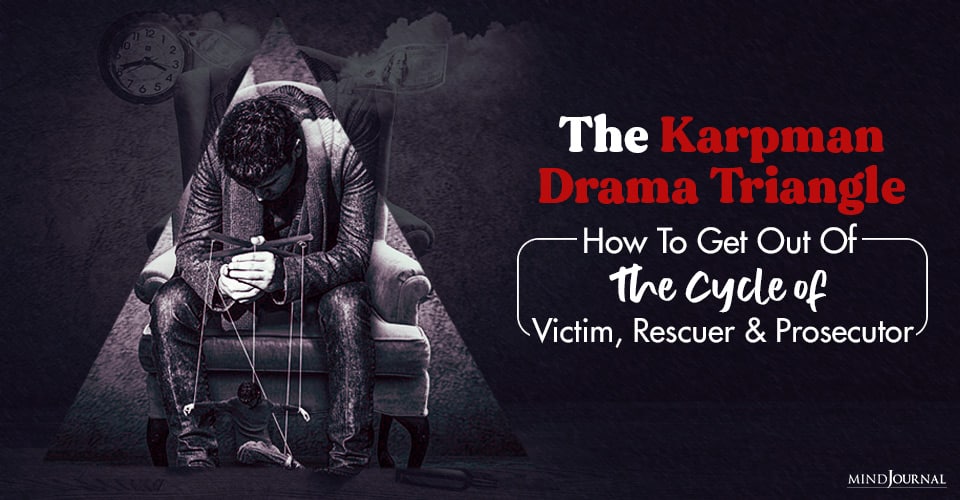 The Karpman drama triangle is a social model of human interaction – the triangle maps a type of destructive interaction that can occur between people in conflict.

When I met my friend TC five years ago, she was struggling to exit a highly toxic co-dependent relationship.

Without digging up details that might be too personal to her, I can talk of the patterns of that particular relationship, which made it toxic. It was an ongoing “drama” with TC playing three different roles when seen from a larger perspective – the victim because she felt helplessly stuck with a person who abused her emotional boundaries again and again and didn’t think there was a way for her to strike out on her own.

The persecutor, when her patience would run out, the experience of feeling cornered having stretched her thin, and she would throw around things inside the house, yelling so much that a few times the neighbors even felt threatened; and the savior when her then-partner would come complaining that the years had not done anything to his loneliness, to his feeling like he couldn’t count on anyone.

Karpman came up with this relational structure to explain social and interactional dynamics when he was still training under the renowned psychiatrist Eric Berne, the founding father of transactional analysis.

Related: What Is The Karpman Drama Triangle and How It Causes Unhealthy Relationships

The triangle represents an interplay between behavior patterns that an individual resort to when in contact with another individual’s behavior patterns. So question is, how would you know which of the three (often it’s more than one) roles you tend to resort to unconsciously when relating to another person or a larger situation?

When you step into the victim’s shoes, the whole world seems like it’s out to get you.

As a victim, your personal sense of power takes an immediate backseat, and in its place comes helplessness that is sapping and depressing. In the victim’s shoes, an individual often experiences “stuckness”, considering the perceived loss of power makes them feel like the situation can’t ever change.

As against actively working to change your circumstance, a victim partakes in blaming the other people involved for their own suffering.

Oppression, real or perceived become a consistent theme to anyone who resorts to playing this role often.

When you or your context presents the persecutor theme, you might be seen as controlling, oppressive, angry, and malicious. Persecutors typically like to be in total control, lest the context puts them into the victim’s shoes.

Condescension and defense are also part and parcel of the persecutor theme. Remember the aspect of my friend’s behavior I mentioned earlier, where she would go into fits of anger and throw things around the house? That’s a classic persecutor at work.

To get their own way, they will do anything, is the message the persecutor delivers as a sub-text. The “stuckness” of the persecutor lies in being inflexible and in the inability to register no other point of view, except the one they hold sacred.

Related: The Under The Radar Relationship Killer

In this role, you or anyone else will feel the need to “fix” what is wrong for the victim.

The worth of the rescuer lies in identifying with the victim and feeling on their behalf, also to then act on their behalf. This is the third wheel of this co-dependent cycle that Stephen Karpman called the “Karpman Drama Triangle”.

The rescuer also experiences a “stuckness”, one where they attach their worth to the solutions they can offer. What they might often not be in touch with is a deeper need to be also cared for and be seen exactly as they are. This takes a certain amount of vulnerability and the rescuer might find it more comfortable to operate from a problem-solver stance.