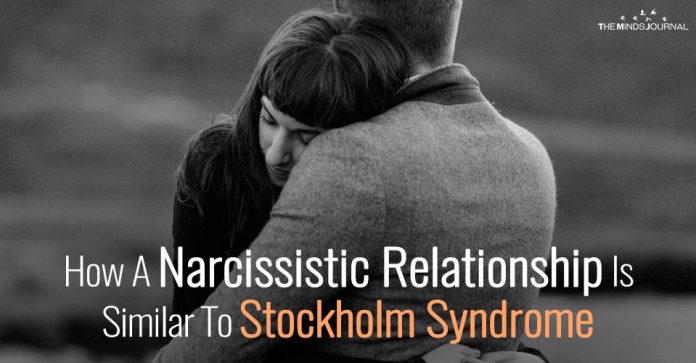 Traumatic Bonding: How A Narcissistic Relationship Is Similar To Stockholm Syndrome

Most of the time, when it comes to a narcissistic relationship, it has been seen that victims have a tough time letting go of the relationship. This is because the narcissist has constantly brainwashed and manipulated the victim in believing that they are nothing and have no identity without them.

Unsurprisingly, people who are in a narcissistic relationship tend to feel overly attached to their partner, despite all the abuse they go through. This is also referred to as a Trauma Bonding 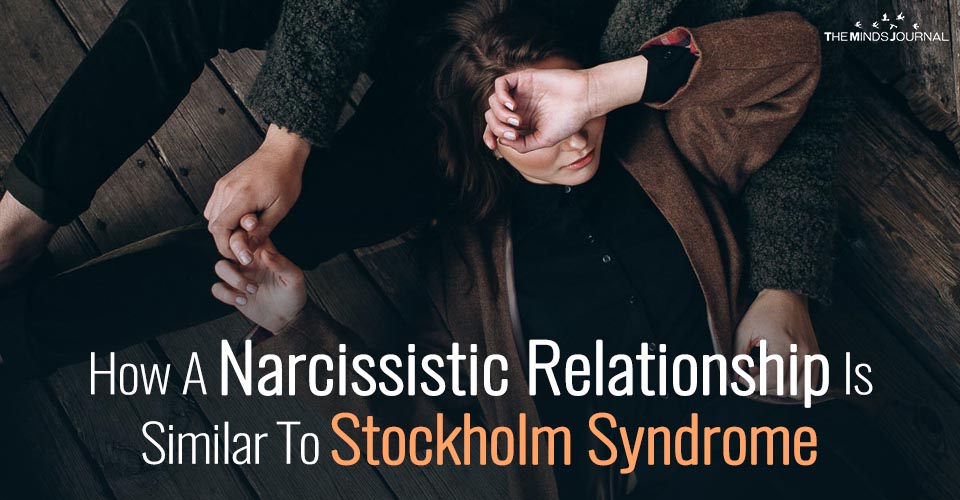 Traumatic Bonding: Loving a narcissist is like Stockholm Syndrome

The cycle of abuse is pervasive and difficult to break free from, let alone get over. We become addicted to a relationship and a person who is no good for us. It was like a drug for me. The only person who can make you feel good again is the person who is hurting you. It’s no wonder leaving is so hard.

But the beginning of the end of my relationship happened quite a while before I finally left him.

The only way to free ourselves from an abusive relationship is to take all the energy we are wasting on them and focus it back on ourselves. To take our focus off trying to fix them, change them. Change us instead.

As I worked on my self-esteem I started to realize, I deserved better. This relationship wasn’t good enough for me. I had to leave. I had to plan to do so safely as this the time when 75% of victims are killed or injured by their partners. Only then would I be able to heal.

Leaving an abusive relationship is one of the hardest things I’ve ever done in my life. I left and went back to my ex many, many times, even after he’d nearly killed me. I’d have steely resolve, only for it to melt when he was loving again.

Many other victims of domestic violence I’ve talked to say the same. That they minimize what’s happened. That once the bruises fade, it doesn’t seem so horrible after all. They felt perhaps they had overreacted? Guilty for abandoning them when they need me. It takes a huge amount of courage and strength to leave an abusive relationship.

The first stages are when we are still in the relationship. I relate to every one of these stages:

This is where we deny or minimize the abuse. Whilst everyone around us can see what is going on, we either lack awareness of how bad it is, deny it or minimize its influence on us.

We may feel trapped and hopeless to improve things or change them. We make no attempts to take action to make our life safer and less threatening. We don’t see our partner or abusive person for who they really are.

We prefer to recall the person we first met, who love-bombed us and made us feel so special. Or the good times, the “honeymoon stage” after abuse, when they shower us with gifts and affection. We long to believe their promises that it will never happen again. So, delude ourselves into thinking that if we change to please them and not provoke their anger, the abuse will stop.

Optimistic women blindly hope that their toxic relationship will become perfect one day. Optimism makes it difficult for them to leave the relationship.
Read more
Trauma

How PTSD Symptoms Differ Depending On How Someone Was Traumatized?
Read more
Relationship Boundary

Without strong boundaries in place (which come from speaking our truth and saying No consistently) we are an easy target to be taken advantage of.
Read more
wpDiscuz
0
0
Would love your thoughts, please comment.x
()
x
| Reply