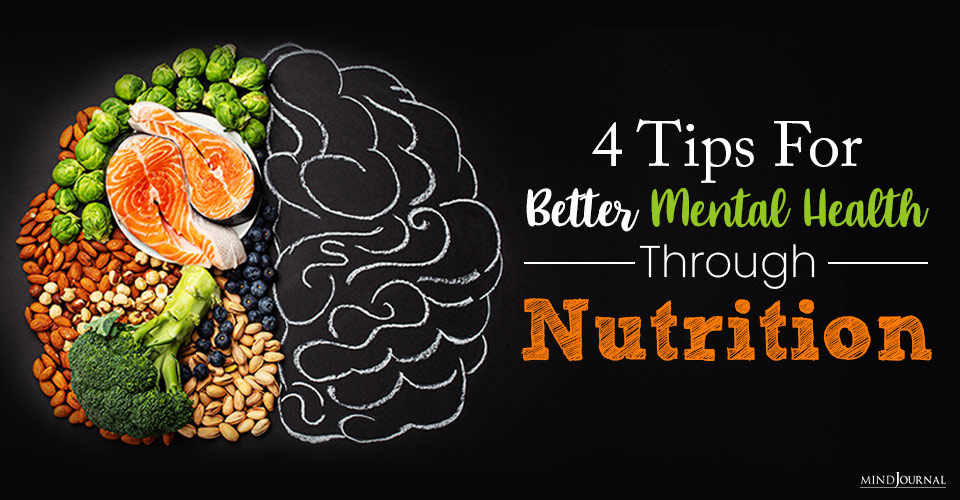 A large body of evidence suggests that nutrition is as important to mental health as it is to physical health. While picking up foods, we always think about our physical health, but did you know, our diet has considerable impact on our mental wellness too?

If there’s one lesson I’ve relearned during the last few months it’s this: what I eat makes a difference in how I feel. The role that nutrition plays in your mental health has been confirmed in numerous studies. Of course, diet and nutrition are not the sole triggers for mental illness. Nor are they the defining reason for subsiding symptoms.

That said, optimizing your nutrition is a great way to help make sure you’re sending your mental health up for success. While I could write a novel on the subject of mental health and diet, I promise I won’t. Instead, I want to focus this article on two challenges my clients report: depression and anxiety.

Here’s four easy to implement considerations for nutrition that can help depression and anxiety.

You know I love my first cup of coffee. Yet, I typically have only that one cup. That’s because while a cup of coffee or an energy drink might seem like a helpful energy boost, but it can have a detrimental effect on your mental health if you suffer from anxiety.

Caffeine is a psychoactive drug that can change the mind’s mood or perception. It causes nervousness, tension, and jitteriness. Adding caffeinated products to an already elevated anxiety level is never a good idea.

Many of the side-effects displayed from the use of caffeine are the same as those experienced at the beginning of a depressive episode, or during the onset of a panic attack.

Sugar is found in almost everything we eat or drink. There is technically no nutritional value in sugar, and research has indicated that children whose mothers intake higher amounts of sugar while pregnant are more likely to have emotional problems in childhood.

In adults, the risk of depression is greatly increased with diets that include heightened amounts of sugar. The crash from a sugar rush causes mood changes, difficulty focusing, and heavy fatigue.

Everyone knows that tired, exhausted feeling from a sugar crash. Science even shows that it makes decision-making harder.

The initial spark of interest in Omega 3 fatty acids began with the knowledge that depression was much more infrequent in areas of the world where diets are higher in these fatty acids.

Debra Smouse is a life coach and author who has been published in Time, Huffington Post, MSN, Psychology Today, and more. She knows that the path to loving your life begins with an uncluttered mind.  Snag a free workbook with life hacks on how to love YOUR lifeView Author posts