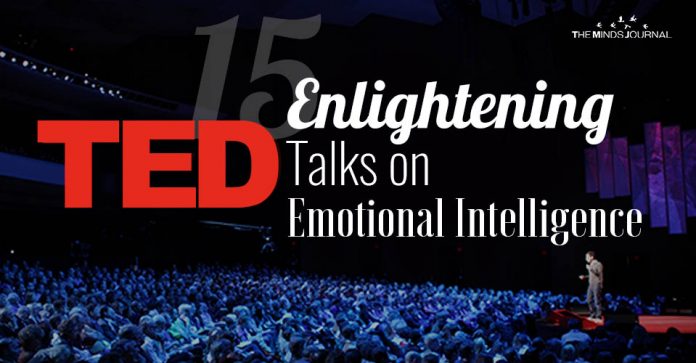 Some of the most enlightening TED Talks on Emotional Intelligence

Ever since their launch in 1984, TED Talks have offered the world with inspirational, informational and influential speeches.

These talks have been given by people from different walks of life on subjects ranging from education and business to creativity and culture.

Emotional Intelligence is one of the many topics that have been talked about and it goes to show how crucial it is in this day and age for leaders of all backgrounds to master this trait.

Emotional intelligence is generally said to include at least three skills:

Related: Painful emotions can be hard to understand and handle. It comes to the point where it feels like it’s a part of us and it desperately needs an outlet. Here is How to Release Painful Emotions Trapped in Your Body.

Author of the book Emotional Intelligence, Daniel Goleman talks on the topic of compassion on his 2007 Ted Talk. He mentions the spectrum from self-absorption to compassionate altruism that exists and is exhibited in one’s behavior.

His message on how an empathetic response to others and how it changes their reaction in them is indeed very eye-opening. He came to understand through his ‘awakening’ into ‘the human moment’ that people are so caught up in this ‘urban trance’ of all the hustle and bustle of modern life that it has left everyone with less compassion and consideration for one another. He states that there is no correlation between IQ and emotional empathy.

In this TED Talk, Daniel Goleman speaks on how we can build emotional intelligence in a workplace environment. He mentions the need for leaders to use strategies to enable a state of flow among co-workers in order to enhance the productivity within the workplace. The role of a leader in taking responsibility in the emotional landscape of a company and the intentional use of mirror neurons from the social brain is explained in his speech.

The following points state the ways through which leaders can support their workers to reach a state of flow:

Learn more about Daniel Goleman and his studies on emotional intelligence on his official website.

TED Talk 3. You Aren’t at the Mercy of Your Emotions – Your Brain Creates Them | Lisa Feldman Barett

This talk by Lisa Feldman Barrett is based on a neuroscience research conducted by her and her colleagues. Great insight into the architecture of the experience of human emotions was given to the neuro-scientists and psychologists by the meta-analysis of emotions research (Lindquist et al. 2012).

Barrett sheds light upon the empowering nature of the science of emotions. She explains that the brain constructs predictions as a way of reacting to physical experiences. This implies that emotions are mere guesses or predictions that are most similar to other life experiences. These experiences are developed through time but human beings are born with a physical barometer for basic sensations like calm, agitation, and comfort vs. discomfort.

Blanc Ocean
Hey, I’m Blanc. I am a writer, a lyricist, a musician and an award winning poet. I am a third culture kid (not really a kid anymore) and an introvert by nature. I am passionate about pop culture, basketball, cinematography, anthropology and drama. I believe in the power of words and ideas and their potential, when followed through with action, to change the world.
-Adverts-

Do you have an inherent need to please others, and want them to like you?
Read more
Lifestyle

The healing power of dance can not only enlighten our soul, but improve our overall physical and mental well being. Here's why you need to get grooving.
Read more
Entertainment

These Ted Talks are sure to ignite their passion and move them to think differently. All the videos are inspiring, engaging, and motivating.
Read more
wpDiscuz