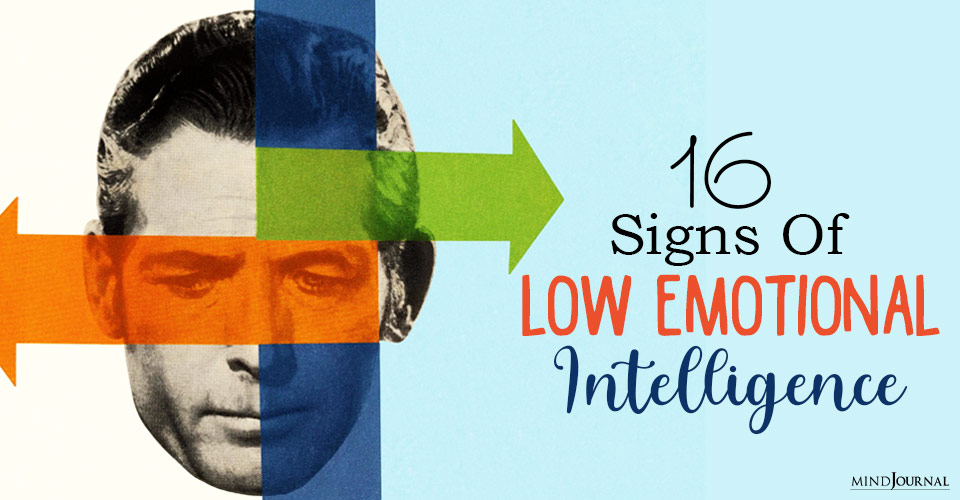 What Is Low Emotional Intelligence?

Individuals who lack or have low emotional intelligence are often unable to identify the emotions of others and are barely capable of recognizing their own emotions. This makes them incapable of connecting with others and building deep, meaningful relationships. Author and entrepreneur Kerry Goyette, LCSW writes in CNBC “The most emotionally intelligent people know that in addition to understanding their own emotions, it’s important to perceive the emotions of others and the way that their environment impacts those emotions.”

So how can you know if you have low emotional intelligence?

Here Are A Few Common Signs Of Low Emotional Intelligence That You Need To Look Out For:

1. You can’t read others

Emotional intelligence enables us to recognize and understand the emotions of other people. It helps us realize when someone we love is upset, stressed or happy. When we are unable to read others’ emotions effectively, it can not only hamper our ability to connect with others, but also damage our existing relationships. “People who have weak emotional intelligence skills have a lack of awareness and are often completely oblivious to the feelings of other people,” adds Kendra.

Seth J. Gillihan, PhD, writes “Correctly reading others’ emotions makes it easier to respond effectively, like making amends with your partner who’s upset at you or saying a kind word to someone who’s feeling overwhelmed.”

Empathy is our ability to sense and share feelings and experiences of other people. It depends on our ability to think or imagine what it feels like to be the other person. When we have low emotional intelligence, we tend to lack empathy. Seth adds “Maybe you know yourself that empathy isn’t your strong suit.”

People might even see you as a narcissist as you are incapable of showing empathy. Kendra adds that people with low emotional intelligence “do not get what others are feeling, so it is impossible for them to place themselves in another person’s shoes.”

Related: Empathy Is A Choice And We’re Choosing To Avoid It, Says Science

3. You think others are over sensitive

Insensitive behavior is one of the common traits of people who lack emotional intelligence. When you have low EQ, you might end up making jokes in tragic situations like a funeral and think that others are highly sensitive. This might make you seem insensitive to others. As people with low emotional quotient “have difficulty understanding the emotions of others, it’s no surprise that they are unable to interpret the emotional tone after such events” explains Kendra Cherry, MS.

4. You don’t understand your own emotions

Our emotions often drive our thoughts, behavior and actions. When you can’t recognize your own emotions, it can lead to unproductive actions and passive-aggressive behavior. “When you lack emotional intelligence, you’ll wonder why you or someone else feels the way they do,” writes psychologist Seth J. Gillihan, PhD. This makes it difficult for you to make sense of emotions in general.