Empathy Is A Choice And We’re Choosing To Avoid It, Says Science 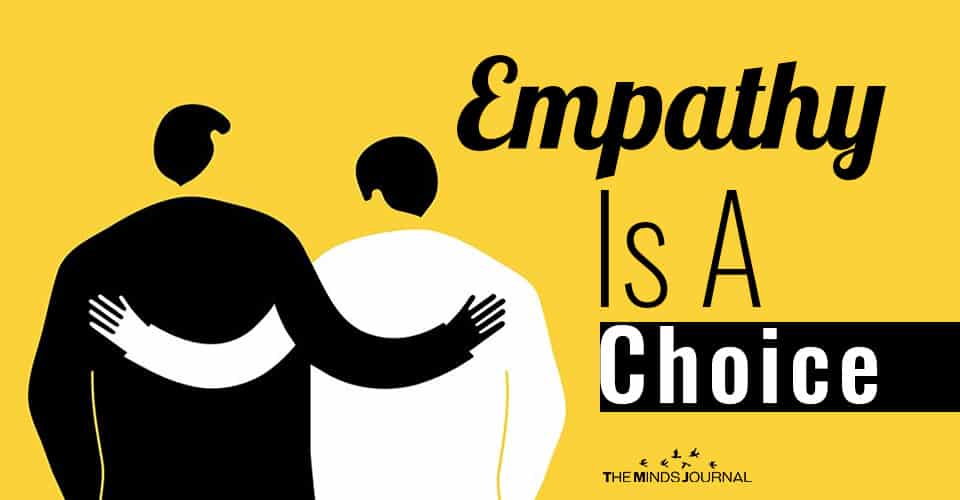 Can we choose to be empathic? Can we decide to empathize with some, but not with others? Empathy is a choice and there’s a growing body of scientific evidence to prove it.

Yes. Empathy is a choice

Human beings are programmed to feel empathy. We often try to put ourselves in someone else’s shoes and feel what the other person is going through. Empathy is one of the most essential qualities we have as humans. Yet when tragedies occur around the world we don’t feel the same volume of empathy we might feel for someone we know.

“While a single crying child or injured puppy tugs at our heartstrings, large numbers of suffering people, as in epidemics, earthquakes and genocides, do not inspire a comparable reaction,” explain psychologists Daryl Cameron, Michael Inzlicht and William A. Cunningham in a New York Times post.

Research reveals that the intensity of a tragedy or natural disaster is not the major factor that influences empathy in most people. TV coverage of natural disasters can be a strong evidence of this fact as well. Often reporters cover news of disasters that are of less intensity more than tragedies that have claimed more lives. Professor William C. Adams of George Washington University has “found that news coverage was in direct relation to how much United States citizens cared about each country.” This goes to show that we tend to empathize more with those with whom we can relate with or who are similar to us in terms of beliefs, perceptions and personalities.

Read also: 10 Signs You Have Above Average Empathy

We avoid empathy by choice

According to a study, empathy is a choice and most people tend to be misers when it comes to empathy. Another 2019 study found that we might avoid empathy when given a choice. Why? Because empathy can be not only emotionally taxing, but it can also have a heavy cognitively cost as well. The study stated “Experimentally increasing empathy efficacy eliminated empathy avoidance, suggesting that cognitive costs directly cause empathy choice. When given the choice to share others’ feelings, people act as if it is not worth the effort.”

The researchers said that this study “establishes the boundary conditions of intergroup empathy bias and provides initial support for a more integrative framework of group-based empathy.”

The evidence reveals that our empathy is a choice as it is greatly influenced by upbringing, culture, nationality, race etc. The New York Times post explains “These results suggest that empathy is a limited resource, like a fossil fuel, which we cannot extend indefinitely or to everyone.”

Read also: The Science Behind Empathy And Empaths

However, empathy is not only determined by our experiences and upbringing. It also depends on our genes. One study has discovered that how empathetic we are as a person partly depends on our genetic code. The study conducted by a team of researchers at the University of Cambridge came to the conclusion after analyzing 46,000 participants.

Lead researcher Varun Warrier says “This is an important step towards understanding the small but important role that genetics plays in empathy. But keep in mind that only a tenth of individual differences in empathy in the population are due to genetics. It will be equally important to understand the non-genetic factors that explain the other 90%.”

The truth is, as life becomes more comfortable and complicated for us, we are increasingly choosing to pull away from one of the most human traits – empathy. One new study has found that empathy is a choice and we are opting more to avoid it. C. Daryl Cameron, PhD, lead author of the study, says “There is a common assumption that people stifle feelings of empathy because they could be depressing or costly, such as making donations to charity. But we found that people primarily just don’t want to make the mental effort to feel empathy toward others, even when it involves feeling positive emotions.”

Read also: What is Your Level of Empathy?

The study conducted 11 experiments with over 1,200 participants by the Penn State University and the University of Toronto. The research revealed that on average only 35% of the participants chose to show empathy while the rest opted to avoid it. Cameron added “We saw a strong preference to avoid empathy even when someone else was expressing joy.”

Can we truly choose to be empathetic?

Not everyone likes to believe that empathy is a choice. Author and entrepreneur Douglas Van Praet believes that empathy is an intrinsic trait that we have little control over. In a Psychology Today article, he writes “Our ability to empathize happens automatically with limited control. We don’t choose to feel pain or sorrow, for example, when we observe someone suffer a misfortune. The sharing of these feelings happens automatically at a deeper level than rational thought.”

He believes that this is because we are social beings and are not programmed to operate in isolation. Douglas claims that we work in “a back and forth looping process with the minds of other individuals, unconsciously inclining us to transcend the boundaries of our own being. The conscious mind thinks ‘I’. The unconscious feels ‘we’.”

Moreover, Jamil Zaki, author and associate professor of psychology at Stanford University, believes that empathy may not be a choice after all, rather an automatic response. He explains “Evidence from across the social and natural sciences suggests that we take on others’ facial expressions, postures, moods, and even patterns of brain activity. This type of empathy is largely automatic.”

He adds that studies on mood contagion prove that there is a perception-behavior link. We tend to imitate the facial expressions of others immediately after meeting them, mostly without even realizing it. Jamil adds “Therapists often report that, despite their best efforts, they take on patients’ moods, consistent with evidence from a number of studies.”

Empathy is a choice, but we must choose it

Whether we can choose to empathize or not, we must decide not to avoid it. It is one of the basic survival traits that makes us human</b. It makes us feel emotions that are beyond our own. It enables us to help others and make the world a better place.