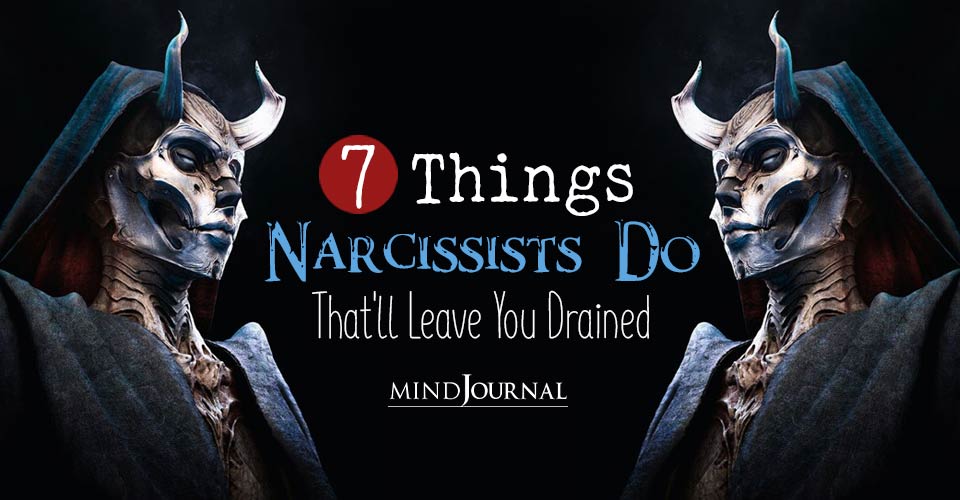 There’re so many toxic things narcissists do that end up leaving you drained, and, if you think you are dealing with one, it is better to take a 360-degree turn and never look back.

You must have experienced narcissistic behavior from people who were once your friend, lover, or colleague at your workplace.

Narcissists can leave you frustrated and unhappy. So, here are some bizarre things narcissists do, that will help you realize if you are dealing with a narcissist at present or if you are a victim of narcissistic manipulation. So, without much ado let’s get started.

Related: 12 Weird Things That Narcissists Do

7 Things Narcissists Do That Will Leave You Drained

No matter what, it’s not their fault. It never is and will never be!

It’s not their fault that they hurt your feelings. Rather, it’s your fault for being so sensitive and for having feelings. To a narcissist, it’s you who is “choosing” to be hurt for all the wrong things they have done to you.

They never fall short of excuses or justifications even when caught doing something rude, selfish, or uncouth. You may be told that they “had to” do it because of some emergency or blame it on someone. If you try to hold them responsible, and if they fail to give further excuses, they will admit that they simply don’t care.

According to them, it is unnecessary or wrong for you to care. Even if you think or choose differently from a narcissist, you’re “wrong”, and they’re “right”. They would ask you to be righteous like them and most importantly, uncaring.

2. They are bonafide liars.

Narcissists lie out of habit or to gain influence or to manipulate. They also lie to get rid of that emotional responsibility and sometimes to create a good image of themselves.

The favorite game of narcissists is LIFE. And, their objective is to win this game at any cost, while TRUTH is one causality in their game plan. They aren’t afraid to speak the truth, only when it can save them or doesn’t cost them anything.

So, they consider the truth to be frequently “flexible” and optional. To a narcissist, being honest is not at all important. Moreover, they perceive honesty as something that can ruin their powerful persona or block their self-gratification.

3. They imply others are inferior.

Narcissists are masters at comparison and hiding their disdain. They will leave no stone unturned to prove that they are better and bigger than others. For instance, they can easily look down on people with lower salaries than them. This is one of the strange things narcissists do.

If narcissists are rich they belittle servants or people in the working class. But, if poor, they look down on upper-class people. Even if they find you more knowledgeable or educated, they will not respect you and dismiss your opinion or say you know nothing.

Irrespective of your lifestyle, choices, appearance, religion, culture, background, and values, a narcissist devalues you unless s/he possess the same.

Narcissists have a real face and a stage face and both are never alike. If you have met a narcissist for the first time, you may find them smart, appealing, intelligent, and probably view them as the best person in the world.

Whereas, those who have known narcissists for years (parents, spouse, children, childhood friends, etc), can identify their real face and their frustrating, toxic nature.

Those attracted to their staged face, wish to spend more time with them, but those who have seen the real face feel uneasy, angry, and unhappy. Over time, more people tend to realize their true colors.

This is one of the most toxic things narcissists do.

The #1 way to become an enemy of a narcissist is to question their loyalty or set healthy boundaries. For your “Mr. or Ms. Wonderful”, it’s a “punishable crime”. They will not tolerate people who unveil their masks and will use myriad ways to make you “pay”.

The moment you enter their bad book, they are determined to take revenge. All that care and love turns into inexhaustible obsession because now you are just a permanent enemy.

It’s astonishing to see how their love turns to poison and the length of time they can hold grudges. Their energy and time invested in planning a campaign to exact revenge are absolutely dumbfounding to non-narcissistic people.

People with narcissistic personality disorder are found to be the most actively and severely projecting people encountered. They hardly accept what they are doing but will accuse you and criticize you for doing what “THEY” are doing. Projection.

You will be perplexed, not knowing what to say as they are projecting psychologically. All you can do is sit and cry and then the narcissist will criticize you for being freakishly oversensitive. Even if you muster up the courage to speak up or give feedback, a narcissist will say — you don’t know what you’re talking about.

7.  They go out of their way to smear people who oppose them.

You will find that narcissists are allergic to the terms “healthy boundaries”, “fairness”, and “honesty”. Despite their bad behavior or insensitive activities, you aren’t supposed to restrict or condemn them. Else, they will target and torture you in the name of social, professional, or personal obliteration.

With the help of their stage face, they get closer to you and recognize your “weak spots”. Once, they are in danger, your areas of weakness will be their prime targets. If you have ever shared any embarrassing moments with them or have felt guilty about a specific behavior or told them what scares you most, then narcissists will use them against you. Remember, that your insecurities are their strength.

They can control you only when they smash your confidence and your influence on them so that you no longer get in their way.

Could you relate to these things that narcissists do? Leave your thoughts in the comments.