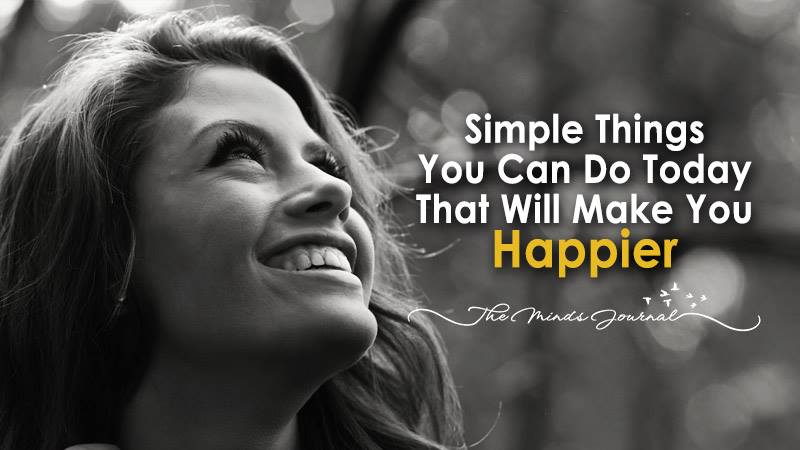 I would love to be happier, as I’m sure most people would, so I thought it would be interesting to find some ways to become a happier person that are actually backed up by science.

Here are ten of the best ones I found.

You might have seen some talk recently about the scientific 7 minute workout mentioned in The New York Times. So if you thought exercise was something you didn’t have time for, maybe you can fit it in after all.

Exercise has such a profound effect on our happiness and well-being that it’s actually been proven to be an effective strategy for overcoming depression. In a study cited in Shawn Achor’s book, The Happiness Advantage 1, three groups of patients treated their depression with either medication, exercise, or a combination of the two. The results of this study really surprised me. Although all three groups experienced similar improvements in their happiness levels to begin with, the follow up assessments proved to be radically different:

The groups were then tested six months later to assess their relapse rate. Of those who had taken the medication alone, 38 percent had slipped back into depression. Those in the combination group were doing only slightly better, with a 31 percent relapse rate. The biggest shock, though, came from the exercise group: Their relapse rate was only 9 percent!

You don’t have to be depressed to gain benefit from exercise, though. It can help you to relax, increase your brain power and even improve your body image, even if you don’t lose any weight.

A study in the Journal of Health Psychology 2 found that people who exercised felt better about their bodies, even when they saw no physical changes:

Body weight, shape and body image were assessed in 16 males and 18 females before and after both 6 × 40 mins exercise and 6 × 40 mins reading. Over both conditions, body weight and shape did not change. Various aspects of body image, however, improved after exercise compared to before. We know that sleep helps our bodies to recover from the day and repair themselves, and that it helps us focus and be more productive. It turns out, it’s also important for our happiness.

In NutureShock 3, Po Bronson and Ashley Merryman explain how sleep affects our positivity:

Of course, how well (and how long) you sleep will probably affect how you feel when you wake up, which can make a difference to your whole day. Especially this graph showing how your brain activity decreases is a great insight about how important enough sleep is for productivity and happiness: Another study 5 tested how employees’ moods when they started work in the morning affected their work day.

Researchers found that employees’ moods when they clocked in tended to affect how they felt the rest of the day. Early mood was linked to their perceptions of customers and to how they reacted to customers’ moods.

And most importantly to managers, employee mood had a clear impact on performance, including both how much work employees did and how well they did it.

Continually Swimming in an Endless sea