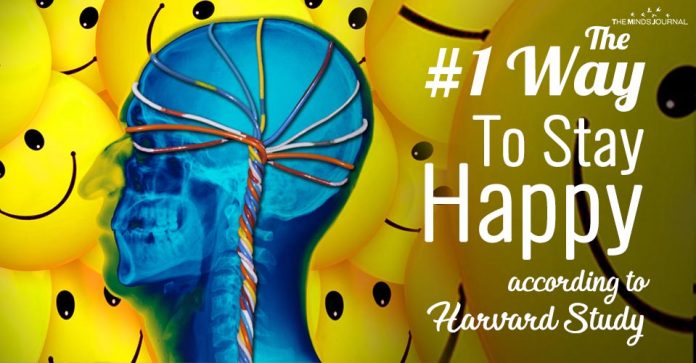 What Makes You Happy? Harvard Study Finds #1 Way To A Good Life

What makes you happy? How to stay healthy and live long? What defines a good life?

Human beings have been struggling to answer these questions for millennia.

Robert Waldinger, a psychiatrist, professor at Harvard Medical School, and the director of the Harvard Study of Adult Development decided to find that one thing that makes a good life, helps us become happier and healthier.

The researcher found that people had different views about being healthy and happy. In a survey asking millennials about “what makes you happy” or things that can make them better in the future, most people answered – money, fame or being rich.

We’re told to be the best in everything, work hard, be successful, earn more, win the rat race. It is in the very mind of most people worldwide that these are things that ultimately make our life happy and fulfilling.

Related article – 12 Things That Are Making You Unhappy In Life

But, is it true? Do people with such lofty goals end up being happy?

What choices do people make and how they work towards our greater good is unclear!

To figure this out one needs a picture of the entire lives of humans!

Thus, Mr. Waldinger decided to watch humans as they go through life right from the time that they were.

Harvard Study of Adult Development is one of the world’s longest studies of adult life that tracked the personal and professional lives, physical and emotional health, victories and failures in marriage and careers of the participants for over 80 years.

The results are surprising for the entire world.

Besides results, it’s jaw-dropping to know that this study is running for 80 years without fail. Fortunately, the research staff was very cooperative and the participants too did not resist sharing personal information years after years.

But, before discussing the results let’s see –

How did the researcher find what makes you happy?

This one-of-a-kind study was started in 1938 during the great depression. The scientists divided the participants into two groups. There were  –

There are no female participants in the study because Harvard College was only for males then.

Entered into the study as teenagers, boys from the first group graduated during the second world war and most of them chose to serve in the war.

From the second group –

Over the years the study expanded very well.

How did the researcher track the lives of these participants?

To get a clear picture of the participants’ development and lives, the research team personally met them every two years. And asked them to solve a set of questions about their lives.  Also, collected their blood samples, brain scans, and other medical records.

The research team spent time with the participant’s family members to know their deepest concerns. In this process videotaped the communication with children and wives. As well as encouraged some women to join the study.

Reading can fill your mind with imagination and take you to places you’ve never seen. If you are wondering about making reading your hobby, then here are 8 reasons for reading more.
Read more
Lifestyle

“At a very basic level, people will be happier to be around you if you have quick nunchi,” says Hong.
Read more
Depression

As long as misconceptions about mental illness persist, so too will stigma.
Read more
wpDiscuz
0
0
Would love your thoughts, please comment.x
()
x
| Reply