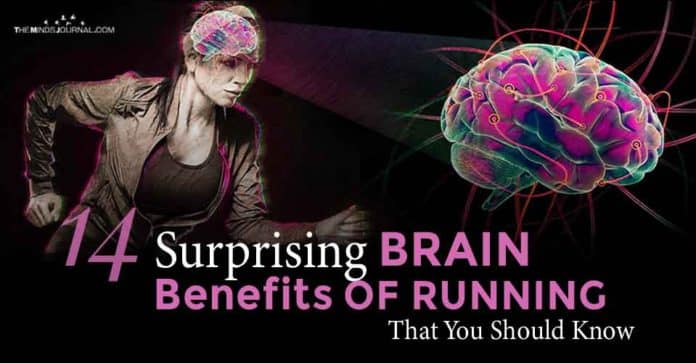 Neuroscientists claim that running changes our brain and affects how we think and what we feel. Science confirms that running every day for 30 minutes is enough to reap amazing brain benefits.

There are surprising ways of running stimulates your brain.  And these benefits of running apply to both casual runners and dedicated marathoners.

Related: 16 Most Common and Weird Mind Tricks Your Brain Plays On You

I don’t know if these are the reasons why Forrest Gump ran for three years, two months, fourteen days, and sixteen hours. Well, you don’t need to run like an insane person!

Read on to know how running changes your brain wiring and it will surely motivate you to lace up, head the outdoors and pound the pavements.

In 2018, researchers at Western Michigan University conducted experiments to check out if working leg muscles directly impact the mental state. The results showed that running for 30 minutes improved the “cortical flicker frequency” threshold that is linked with the ability to better process information.

Earlier David Raichlen conducted a brain imaging study to compare the brain of runners and nonrunners. The runner’s brain showed an increase in coordinated activity in regions, mainly at the front of the brain, known to be involved in executive functions and working memory.

David Raichlen’s study also showed that running damps down the DMN region of the brain. It is a series of linked brain regions that are activated whenever we idle or are distracted.

DMN is the culprit that we imagine all the nonsense stuff or think of the past or worse when we have nothing to do.  This is responsible for clinical depression according to neuroscientist Ben Martynoga.

As per brain imaging studies, running suppresses the DMN region and cuts off destructive thinking. The message is clear, the more you run, the more you are cognitively engaged.

3. Running spikes your Self-Esteem and Confidence

Professional runners claim that running builds their self-esteem and confidence. With each footstrike, you become stronger and confident to clear obstacles. Running and jogging trigger the feeling of empowerment, improves the perception of fitness, body image which are linked to improved self-esteem. If you are struggling with low self-esteem, why not reap such benefits of running?

Executive functions include the ability to marshall attention, switch between tasks and solve problems. Intense sprints can boost executive function according to a study published in Preventive Medicine Reports.

Simon Cooper and other researchers asked young volunteers of average age 12 to complete 10-second sprints for 10 minutes. The participants also completed the Stroop Test, the measure of executive function before and after the sprints. The executive function seemed to be enhanced immediately and 45 minutes post sprints-based exercise. Similar studies are been carried out across the world to check out the impact of running on different cognitive functions.

Contrary to popular belief, the generation of new neurons in our body doesn’t stop with aging. The human brain can create new neurons throughout our entire life.

A vigorous aerobic exercise is the only activity that helps in the formation of new brain cells as said by Karen Postal, president of the American Academy of Clinical Neuropsychology. You can choose to sweat it out on the treadmill or out in the open. 30-40 minutes of running is enough to stay mentally fit for years to come.

Watch out this video to know how running can turn on your brain:

Millennials are so anxious and unhappy, they seek psychotherapy more often than members of earlier generations. They have to deal with lots of negative emotions, not just restricted to job, money, or marriage. Running can hasten emotional recovery and boost emotional flexibility.

The healing power of dance can not only enlighten our soul, but improve our overall physical and mental well being. Here's why you need to get grooving.
Read more
Interesting

Do you think your drunk self is different from your real self?
Read more
Coronavirus

If you have always wanted to adopt a pet, then now is probably the perfect time to do that, as they can help you a lot mentally, in this crisis.
Read more
wpDiscuz
0
0
Would love your thoughts, please comment.x
()
x
| Reply