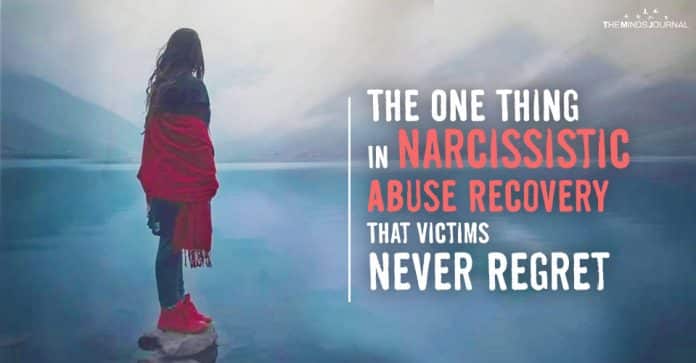 The One Thing In Narcissistic Abuse Recovery That Victims Never Regret

Going “No Contact” with a narcissistic peer group, person, or family unit can be a terrifying prospect to consider but it’s the one thing narcissistic abuse survivors all seem to wish they had been brave enough to do sooner.

Don’t let the fear of the unknown or fear-based thinking that they have raised you in, around, or with keep you tied into a position where they can target you for abuse or‪ scapegoat‬ you as their ‪domestic violence‬ punching bag of a victim.

As you master the art of recognizing what is (and conversely what is not) “Narcissistic Abuse”, it can truly help ease the pain caused by the callous and self-centered person’s attack front.

When one learns how to observe rather than react, the essence of Zen Buddhist philosophy has been invoked.

The mind remains calm, cool, and in control, while it simply observes the passing emotions. One becomes like the rock in order to witness the position of witness as well as to decrease reactivity as an acted-upon agent.

Once one is able to stay calm and learn how to survive narcissistic abuse by compartmentalizing and subsequently depersonalizing it, everyday life seems to become easier to bear, reports most survivors who have already used the gray rock technique (or something similar) to help keep them physically safe, mentally well, and emotionally sound with the dawning of recognition.

The cool thing about not being a Narcissist by nurture or nature (or any other sort of Cluster B personality) is that average and even above-average people are readily able to change. The Narcissist (on the other hand) is bound intellectually and emotionally to psychologically and spiritually perpetually remaining the same.

Some psychologists suggest that most people with Cluster B personality disorders are actually taught to be egocentric, to act attention-seeking, and to bully other people.

There is a large group that believes very few people with NPD, ASPD, BPD, or HPD have the ability to affect honest change in their personalities.

Agreeing that the average emotional IQ (or “EQ”) of a Narcissistic person is roughly around the age of six and it’s no wonder many therapists and psychiatric professionals refuse to take on such toxic and potentially socially or physically abusive clients.

Since the people in question are unlikely to change and their personality type (by nature) makes them untreatable, the best alternative for any person who has been victimized is to attend solo counseling sessions without the Narcissist.

The most interesting part of learning how to go gray rock like a boss is how much of a burden it lifts off your mind, body, and spirit.

Most people who successfully go ‪no contact‬ with a ‪‎narcissistic‬ ‪abuser‬ or narcissistic family unit say the only thing they regret is they didn’t do it years earlier.

Narcissistic Abuse recovery takes time, work, and a lifetime of continuing to read self-help literature about it on a daily basis, but it’s totally possible to do successfully. Actually, the fewer people you remain in contact with that actually personally know your abuser, the faster you will be able to take back your life and reclaim your peaceful, resting state of joyful and loving personal power.

This article has been republished from Flying Monkeys Denied, click here to view the original copy.

zanem
I am a journalist, a blogger and an aspiring author and I write mostly about relationships, abuse, human psychology and spirituality.
-Adverts-