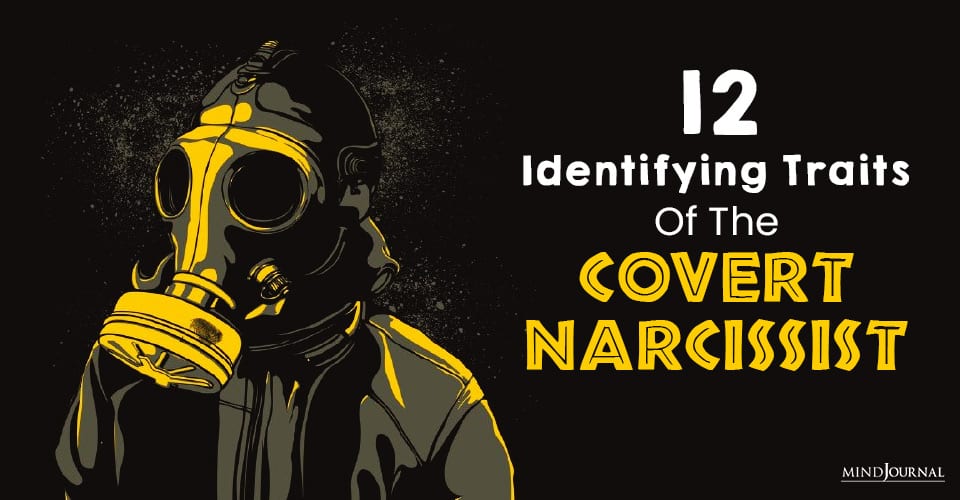 Most of us know what a narcissist looks like. We have seen them portrayed in movies and books as manipulative, attractive men or women who think and act like they are better than others. But not all narcissists are like this.

Covert narcissists are dangerous people who know how to hide their narcissistic traits in public and raise hell by controlling and manipulating your life in private.

“Covert narcissists are masters of disguise—successful actors, humanitarians, politicians, clergy members, and even psychotherapists—who are beloved and appreciated, but are secretly selfish, calculating, controlling, angry, and vindictive.” – Ross Rosenberg

No one would believe that the man who sits in church with his family every Sunday, is a monster behind closed doors with the family that looks so perfect on the outside.

No one would believe that the ‘doting’ mother cheering on her child in the school gala, had been yelling and belittling her daughter minutes beforehand.

Who would believe that the friendly local grocer who chats happily with his customers has been giving his wife the silent treatment and not acknowledged her existence in weeks?

Who would believe that the lovely charming ‘lady’ at the top of her profession, trampled on anyone who stood in her way on her rise to the top?

The closet narcissist is a great pretender, hiding who they really are with the expertise. The covert narcissist puts on such a convincing display of being a loving, kind person in public but to those who know them personally, to those closest to them, they are selfish, manipulative, exploitive and anything but the loving and kind person that they purport to be.

They know that if they displayed their true colors in public, they would lose the recognition, respect, and admiration that they so desperately crave. Perhaps their ability to fool the outside world makes this type of personality one of the most dangerous. They worry about being found out. They are deeply envious knowing that they can never be the person that others believe them to be.

The covert narcissist is a con artist who lacks the confidence of the covert narcissist. They need constant attention moving from one relationship to another in order to avoid being alone. Time spent alone often leads to depression when their needs are not being met. Narcissistic supply is vital to their well-being.

Your value in the narcissist’s life will depend on your usefulness. When you are no longer regarded as useful or you challenge them about who they really are, you will be cast aside without a second thought as if you never existed. Your reputation will have been discredited so that you will never be believed.

Read: What Is A Covert Narcissist?