The 7 Steps To Manifest Anything You Want 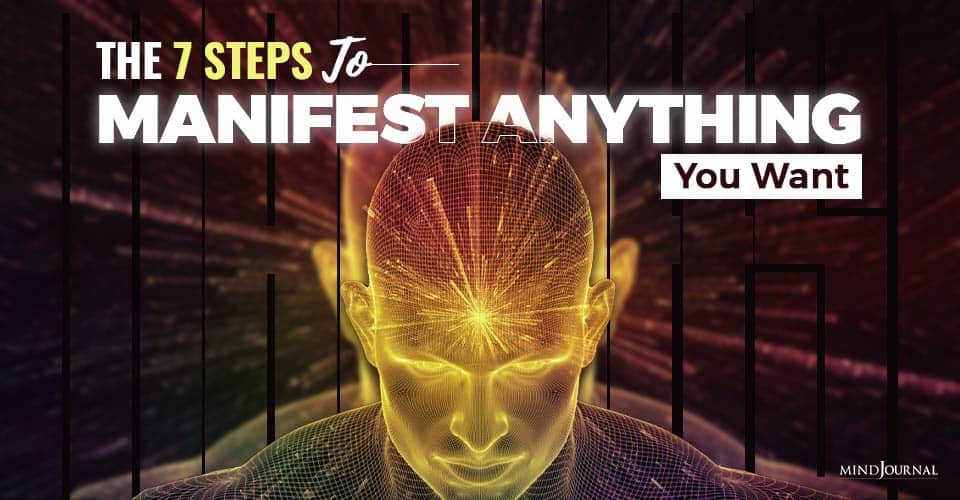 Did you know that manifestation is actually a powerful technology that was taught in all the ancient mystery schools, including those of Egypt? This knowledge has since been suppressed and intentionally hidden, for many reasons. The good news is, we are finally awakening, and this powerful knowledge is being restored.

Many will say that the law of attraction doesn’t work, and this is very true — if you don’t possess all the key components necessary for success. But, when all the pieces of this technology come together, and you consciously use them properly, you have the makings of a Super Power.

I first discovered this Super Power, in the mid-1970s, when I was twelve years old. It was the holiday season, and the only gift that I wanted for Christmas was a green ice skating skirt to match the laces on my ice skates. I had it in my mind that if I wore, this very particular green skating skirt, I would be able to skate like world-class figure skater Dorothy Hamill.

It was the night before Christmas, and my parents were taking me out for our traditional holiday dinner. As we were driving up Northern Blvd, in Queens, New York, my mother sadly announced that, despite her best efforts, she could not find a skating skirt like the one I wanted, and especially not in the exact shade of green. She said, “I want you to know this now so that you won’t be disappointed on Christmas day.”

I knew she was telling me the truth, but you see, I also KNEW that I was getting that green skating skirt. I had been imagining it for weeks. I clearly saw myself on the ice rink doing spins and figure eights, just like Dorothy! I believed that the green skating skirt held the key to my success, and I had to have it! Remember, I was twelve. So, even as my mother was telling me it was impossible, I continued to imagine what I desired, without doubt, or hesitation.

Soon, we were pulling up in front of the restaurant, only to discover that the store next to the restaurant had moved out and in its place was a sporting goods store, and, there IT was – in the window on a manikin – MY Green Skating Skirt!! I practically jumped out of the moving car, with my mother in tow.

The store was closed, but I could see the store clerk inside. I banged on the glass, until my relentless enthusiasm made her open the door. It was the only skating skirt that they had in the whole store, and it was my size – and, yes, it was the perfect shade of green. It was even on sale. My shocked mother’s mantra was, “I can’t believe it.” But, I did, and that is the whole point!

On Christmas day, I put on the skirt, got out on the ice, and without a second thought, I gracefully spun, twirled and figure-eighted my way around the rink. When someone asked how many years I had been training, and I answered, “None,” it occurred to me that my expertise on the ice was technically impossible, yet, I was doing it.

Read Science And The Law Of Attraction: 4 Times Research Supported The LOA

It took me about ten years to understand how the power of my mind instantly made me a figure skater, but it would take me decades to understand how I manifested that green skating skirt. What was this magic key that I had accidentally stumbled upon, and how could I use it, at will, to create or attract, what I desire? That green skating skirt set me on a life-long journey of metaphysical discovery.

After years of searching, researching, and traveling to ancient metaphysical sites, I now understand this ancient technology of manifestation, and, in fact, it is easy to teach and simple to duplicate. I have successfully utilized this powerful method, time and time again, and I have taught it to friends, family, clients and students, all around the world, and, now, I am going to share it, as my holiday gift to you.

In your mind and body, you possess the greatest, and most sophisticated, technology in all the world, and when you know precisely, and accurately, how to use it, you have the power to consciously create the life you most desire.

There are seven steps to creating anything that you desire.

1. Know what you want with clarity and certainty.

2. Know that you are unconditionally worthy to be, do or have what you desire.

3. Imagine what you want, as if, it has already happened.

4. Do not concern yourself with “how” it will manifest.

5. Know that it is already done, even in the face of opposing evidence.

6. Stay “tuned” to your desire, without doubt, or hesitation, for as long as it takes to manifest.

There is literally nothing that you cannot manifest with this formula, but, in order to make it work, there is no room for deviation.