Single Vs Married: Is Being Single Better Than Being Married? 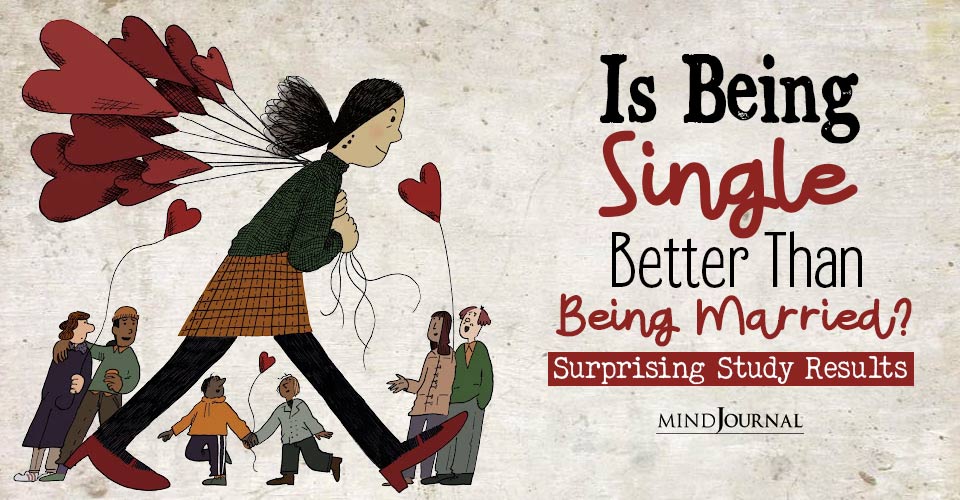 Single vs married is always a hot topic to debate. A lot of people claim that marriage is a source of all happiness and many believe in the “live happily ever after” slogan from fairy tales. But, if you are contemplating – Is being single better than being married, then this post is an eye opener.

Does being married help you live a long, happy life?

No, according to Bella DePaulo!

Bella DePaulo, social psychologist and professor at the University of California, Santa Barbara,  wanted to challenge this “conventional wisdom” and told the same to the American Psychological Association’s annual convention in Denver.

People who are single “live their best, most authentic and most meaningful life” the psychologist claimed based on her years of research. Professor DePaulo said to the convention that she is “single, always have been and always will be”. There is an increasing number of people who choose to stay single, for they believe that “happily married” is a myth. She also validates her claims with facts and explains why Is being single better than being married.

Related: Being Single: 20 Important Lessons I Learned From Being Alone

Why Is being single better than being married?

Bella DePaulo started to investigate the results of being single vs married and came across 800 different studies (that mentioned single people) conducted in the last three decades. Some of the study results based on comparing people who stayed single with those who married showed that –

In another study published in NCBI, comprising people who stayed single lifelong, such people –

But, in the case of married people, it was just the opposite. The above data validates that singles too can live a long, happy, healthy life. Scroll down to know the reasons why being single is better than being married.

Related: Why Empaths Prefer To Stay Single and Not in Relationships

Now coming to statistics, as per Office for National Statistics figures:

The situation is the same in the United States, according to the Bureau of Labor Statistics (BLS).

Coming back to the question – “Is being single better?”, professor DePaulo’s research reveal that there is an increasing number of people who are single and never married, not only in the UK but in different parts of the world. Yet, people rarely acknowledge the growing popularity of “unmarried life”.

Research says you can be single and happy!!!

She said an increasing number of people are willingly single and it is the choice they have made consciously. And that is expressed by constructing their self-identity and accepting their new way of life. Those willingly single know how to be happy even without the knight in shining armour. Not all single people are depressed or frustrated or lonely.

According to a study published in Journal of Social and Personal Relationships, when compared to married people, single people are more connected to parents, friends, neighbors, and coworkers. Because when people get married, they become more insular. The surprising study findings explain why is being single better than being in a relationship. In short, being single beats being married

Why people can’t accept that being single beats married life?

The problem with the world is that they focus on the loneliness and other negativities associated with not getting married. But what about the beauty and benefit of solitude that most people enjoy being single? How can one ignore that?

Please know that married people are supported by the “relentless celebration of marriage and coupling and weddings that I call matrimania” professor DePaulo said. N doubt, getting married gives you a plethora of benefits in terms of laws, legal and financial protections, and federal benefits. Aside of that cultural advantages too.

But, single people are doing as well as the married people are!

The world is in need of an accurate portrayal of the lives of people who stayed single and never married. And need honest revealations about single people – how they are strong, independent, and mentally resilient and live a meaningful life without getting married. There is a need for more research on never married single people to highlight the reasons why being single is better than being married.

Read about the science-backed benefits of being single here

However, in this so called modern society,

Closely looking at the vast literature available today about single vs married people, it doesn’t validate this age prevailing idea of “happily married”. According to National Statistics Domestic Violence (NCADV), in a year, more than 10 million women and men are physically abused by an intimate partner in the United States.

Social media and movies like “Fifty Shades of Grey” or “Suicide Squad” glorify toxic relationships as true love. Such relationships are far from perfect, but netigens get a wrong idea of what a healthy, meaningful relationship or marriage looks like.

Related: 5 Ways Social Media Can Kill A Relationship Before It Even Begins

No wonder why there is an increase in divorce rates and decrease in marriage rates in different parts of the world.These stats also validate why is being single better than bad relationship.

It means all this long what we believed to be true about marriage and happy endings is actually False.

Being single beats being married

I hope that the above discussion clears why is being single better than being married. But, I don’t mean to say that everyone must stay single forever and never get married! I am myself a single woman and never got married. I want you to know that satisfaction or happiness doesn’t come only from romantic relationships. I believe that the key to healthy, happy and long life is to have genuine attachment relationships and a bulk of literature validates the same.

Professor DePaulo also said that with increasing research in this field, scholars are also learning the “ risks of putting too much relationship capital into The One, and the psychological benefits of investing in The Ones.”

It can’t be said with a guarantee that one relationship status is better than the other. Everyone is unique and there is no blueprint for a good life. In Professor DePaulo’s words, one must pursue what is best for them be it place, spouse, relationships, or people who are compatible with who you really are and allow you to live your best lives.

No I would like to ask you – Is being single better than being married? What do you think? Leave a comment below!

20 thoughts on “Single Vs Married: Is Being Single Better Than Being Married?”

Why The Best Revenge Is Living A Happy Life, And I’m Committing Myself To Mine

The Best Revenge Is Living Well And Living A Happy Life

Starting today, my simple intention is to live in such a way that one day I will be your biggest mistake. How I choose to do that, rather than boasting or bragging, rather than ranting and tantrums, attacking and nagging the bad things that happen, is to ooze awesomeness into existence.

Starting today, I’ll deliver goodness and glory to every second of time I find, and however slight the ray of light that dances on my path,

Love Yourself Enough That You Are Okay Disappointing People

“Love yourself enough that you are okay disappointing people.” - I said that to a coaching client yesterday and I think it’s a really important concept to understand and fully grasp.

Occasionally, we throw away the key and convince ourselves this is how it must be, but what we’re really saying when we do this is three separate things. ⁣

Related: The Art Of Sel

Do you remember the last time you celebrated yourself? The last time you truly appreciated yourself and all the effort you put into being YOU every single day? While self-celebration is still a hard-to-grasp concept for most of us, you should always remember to celebrate yourself, even for the smallest wins.

But what does it mean to celebrate yourself? Let’s find out and celebrate YOU!

What is self celebration?

Self-celebration is the conscious effort of celebrating yourself as a person - for who you have become through effort, commitment, dedication and sacrifice. It is about accepting, acknowledging, empowering and encouraging the person you are now. It is about celebrating your achievements and failures and what you have l