Awesome Personality Disorder: 9 Signs You Are Way Too AWESOME 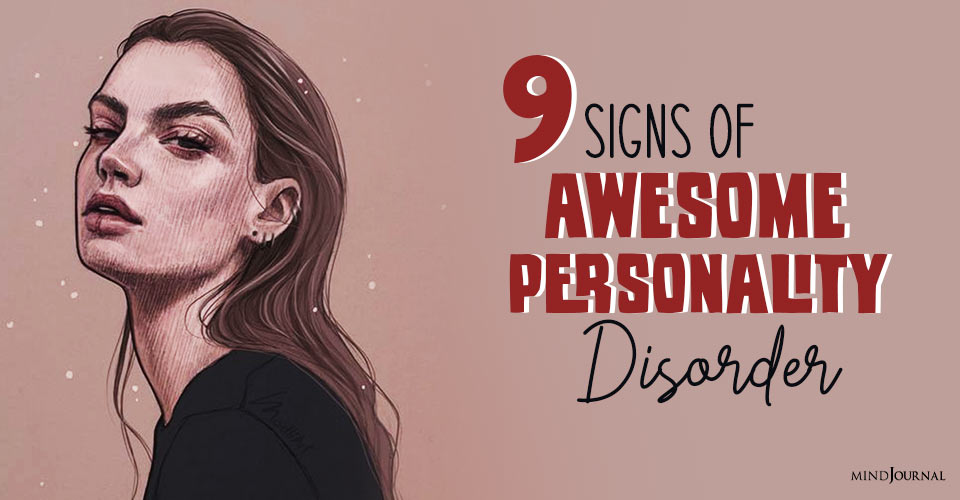 Do you focus on the positive even when the chips are down? Do you tend to impress others without even trying? Do you love helping others without expecting anything in return? If your answer is yes, then you just might have developed Awesome Personality Disorder!

Yes, Awesome Personality Disorder! Being awesome is not about talking the talk, but about walking the walk, especially when no one’s watching! So are you guilty of being too awesome? Let’s take a look at the signs of awesome personality disorder.

What is Awesome Personality Disorder?

It is a hypothetical personality disorder in which a person has a strong sense of honesty, kindness, generosity and optimism. This personality disorder is characterized by a positive outlook, courage, moral values, inner creativity, strong character and the willingness to learn, evolve & grow. Awesome Personality Disorder can be observed in both men and women and the cause for the onset is typically unknown. However, a person can either be born awesome or become awesome through determination, hard work and sheer willpower.

So do you have an Awesome Personality Disorder?

If you haven’t figured it out yet, I totally made that up! But the fact is some people are just too cool and awesome and they just command respect and admiration. You can’t help but be in awe in their presence and feel inspired to be a better version of yourself. I believe such people have, what I like to call, an “Awesome Personality Disorder”.

But why a disorder? Well, some people are just way too awesome and they make it look so easy that you wonder if they are even human or a demi-god. They are so hardwired at being awesome at everything they do that you can’t help but feel inspired. They make you stop and admire them, boost your spirits and make you believe that it is possible to be extraordinary.

But on a serious note, personality disorders are serious mental conditions that require medical attention, support and care. Mental health is not a topic to make fun of. Here, I am using the term “Personality Disorder” in a positive way to admire people with signs of awesome personality. I do not mean to downplay the serious effects of mental illnesses in any way.

Now that we got that cleared out, let’s look at what makes a person awesome.

The truth is anyone can seem to have an attractive personality. They need to say the right things, act cool, look stylish, and post smartly edited photos on social media. Although these people may seem awesome, they don’t really have Awesome Personality Disorders.

Looking awesome is easy! But being truly awesome is a whole different ball game.

When faced with challenges, a person with an amazing personality feels motivated to overcome them instead of feeling crippled with fear and uncertainty. Although you may doubt yourself and feel afraid at times, you are courageous enough to overcome obstacles, whether internal or external, and taste success.

You imagine how success feels in your mind and feel it in the grasp of your hands before you actually succeed. In fact, science confirms that mental imagery and visualization – the act of vividly imagining doing something successfully – can help in improving our objective performance, attentional focus, confidence and awesomeness.

2. You care about others

Another common symptom of awesome personality disorder is caring about and helping others. You are equipped with a strong sense of compassion and empathy. Whether they are your loved ones or strangers, you are always keen on lending a helping hand to those in need without expecting any favors in return.