5 Signs A Seemingly Nice Person Secretly Has Some Cruel Intentions 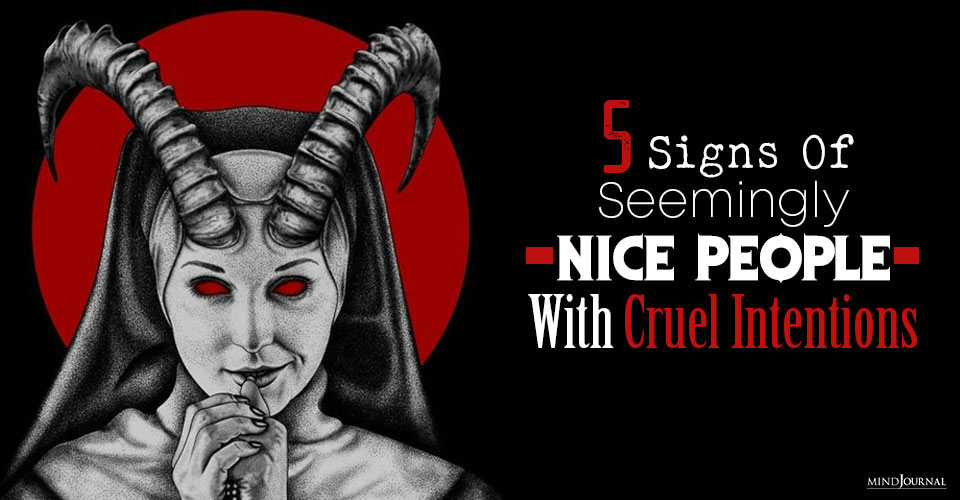 How many times have you felt, ‘This person was so nice; how could he do this to me?’ or ‘What’s wrong with this person? How can such a nice person like her be so bad?’ Well, the harsh truth is that no matter how a person may seem from the outside, this world is full of nice people with cruel intentions.

Yes, that’s how deceiving our world is. We have good people, we have bad people and we have hypocrites who are the most dangerous of the lot. They put on a veil of pretense and act as if they are the nicest people you have ever met in your life and then they reveal their real faces and become exactly the opposite.

In the beginning, it will occur to us, how can the person change? We try our best to find the cause of the change but the truth is, there has been no change; they have been the same. In the process of carrying out their evil intentions, they deceive us by being nice, they gain our trust and love so that they will not be judged or caught and finally they inflict harm upon us.

Not every human being is a good person with bad intentions. Now, the question is, how to spot a nice person with cruel intentions? We just need to be careful and keep in mind certain pointers.

If you notice these 5 signs in people, then know instantly that you are dealing with nice people with cruel intentions.

Related: The Easiest 5 Ways To Spot A Fake Nice Person

1. They always talk about themselves.

People who are really nice will not keep on talking about themselves always. Talking about oneself each and every time implies that the person is selfish and is always concerned about their own needs. Such people who can’t even think of a world beyond themselves cannot be nice.

A nice person with cruel intentions might not talk about negative things directly but the very fact that they are not interested in listening to what others have to say shows that they are selfish and egoistic. Since they can’t talk about anything or anyone apart from themselves or things concerning themselves, they cannot do anything which will not add value to their lives. So, they cannot be nice.

2. They try to gain sympathy.

This attribute is a very dangerous one. Most nice people with cruel intentions try to use sympathy as their tool to manipulate people. Have you seen people who are always talking about their problems and crying over them? They will make a big thing out of a very small issue and play the victim.

By doing this, they try to gain sympathy along with trust and love. So, even if they do something bad, their peers will have a hard time believing the fact that they could do such a bad thing because of their image as someone who has suffered a lot.

Who doesn’t like listening to nice words about oneself? It’s good sometimes but it is not normal if someone keeps on flattering you always. Nobody is perfect in this world and nobody is without any flaw. So, if someone is praising you all the time, be careful.

This is one of the major signs of cruel intentions. People with bad intentions will gain your trust by praising you and saying nice things about you. As a result, even if you are backstabbed, you will wonder, ‘That person loves me so much or that person always says nice things about me. How can they even do this to me?’