Why Do Genuinely Good People Suffer The Most? 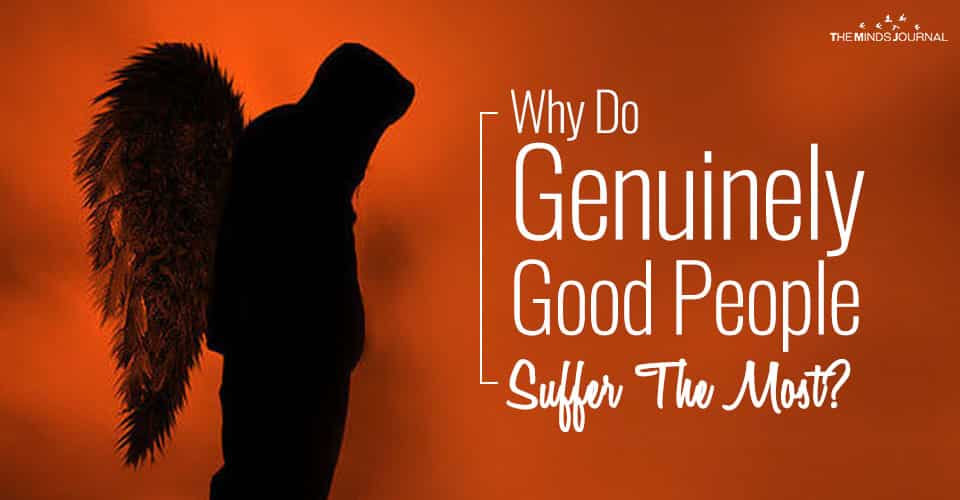 Why do good people suffer a lot in their lives, despite not wronging anybody? This question has haunted us since the dawn of time.

As a child, this confounding question was most likely your first entrance into the confusing, cryptic and cruel world of humanity. As an adult, this question is most likely what lurks in the background of your mind as you witness scenes of suffering and misfortune. And if you are a deeply philosophical person, this question is probably what keeps you awake at night as you play the role of the “Riddler” trying to solve life’s most puzzling questions.

If you are like me, you might have temporarily found solace in religion, believing that even though good people suffer terribly in this life, they eventually go to heaven or some kind of paradise after death. When this was my primary belief I felt some sort of consolation, some small sense of relief and reprieve from my melancholic ponderings of existence.

But eventually, I came to see through the toxic fallacies of religious dogma, sensing deep down that this answer was not enough, despite how much it appealed to my childlike side. And so began my eternal search for an answer to a seemingly unanswerable question. Like you, I’ve suffered a lot in this incessant, obsessive quest, believing that peace of mind lies just over the other side of “The Answer.” Because of this, happiness has always felt “one step away” which I’ve later discovered is the worst form of self-torture.

But there is great value in this suffering because after you exhaust yourself once you reach the point of despair, something within you, breaks. Something within you changes. After wearing down the narrow, societally-conditioned frame of thought and reference through which you have been perceiving, questioning and judging the world, it is possible to expand your mind beyond how it has been taught to think.

Are you looking to let go of your suffering? Read The Key To Bliss: Let Go Of Expectations and Avoid Suffering

I like to think of this as an angry driver raging down the highway. The livid driver’s fury causes him to shoot across the highway like an arrow, rarely deviating and maintaining a straight, narrow path. But once the angry driver has exhausted his reservoir of rage, he begins to slow down, take everything in, and curve his car towards a byroad.

The same can be applied to the question, “Why do good people suffer?” Like the angry driver, it is our first instinct to follow our preconditioned way of thinking and reasoning. For such a question to exist and to continue tormenting us, there must exist the following assumptions:

Is There Such A Thing As A “Good” Person?

Our immediate reaction to the above question might be, “Yes! Of course, there is!” We might then proceed to envision people like Mother Teresa, Mahatma Gandhi, Nelson Mandela, Jesus, and so on. And certainly, these people were kind, compassionate, courageous and generous. But then, were they – or is anyone for that matter – truly “good”?

The problem with our use of language is that it is limiting, divisive, minimizing and simplistic – and it has to be if we are to function efficiently as a society. How far would we get each day if we were to stop and truly elaborate on the intricate nuances of a person’s character? “She is a generous but slightly neurotic compassionate people-pleaser who has a hint of malice and sensuality in the tone of her voice … yeah, I’d like to get to know her more.” To make things easier, most of us just opt to say, “yeah, she is a good person” instead, because it simplifies life.

The problem with the good/bad duality of language is that it fools us into believing that the world is “black and white”: that a “good” person deserves to be rewarded and a “bad” person deserves to be punished. This dangerous, divisive and two dimensional way of perceiving the world is what creates so much of our suffering. And when we believe that we are “good” people, it is common for us to develop a sense of entitlement that causes us to believe that we should be exempt from life’s struggles.

However, when some tragedy or misfortune befalls us we cry out in rage or horror, “I’m a GOOD person … I don’t DESERVE to be punished!” This crack in the fabric of our reasoning greatly unsettles us mainly because it shows us that our “Good and Bad” framework of perception is an illusion- that there is no such thing as a “good” person who is always rewarded and there’s no such thing as a “bad” person who is always punished.

People hate hearing this; it shocks them and offends them greatly. “If there is no such thing as a bad person then who the hell was Adolf Hitler, Charles Manson, and Mao Zedong? What were they? Angels?” Such an argument is understandable and common, but misguided and a product of our black/white, either/or way of reasoning.

Do you consider yourself a good person? Read Characteristics Of A Truly Good Person

Certainly, these dictators and mass murderers were cold, callous, cruel, selfish, wicked and vile, and it would give us great satisfaction to see them severely punished, but the same reasoning we use against them (“they are BAD people”) was used by them against the people they terrorized (“they are BAD, they are not real humans, they are unworthy”).

Thus as Sol pointed out in a previous article:

Once we’ve morally assessed someone, any form of disdain, or even cruelty, can be rationalized (social alienation, bullying, torture, wars, etc.)

We might think that we are “good” people who deserve the best in life, but then other people might believe we are “bad” people who deserve to be punished. So who is right? Us? Them? Who makes the final judgement and why? Which subjective opinion is more correct? And even if you prove yourself to be a good person, are you really 100% good?

Can you see the problem with dividing the world into a simplistic good/bad framework? It simply doesn’t truthfully represent the full spectrum of what makes us “us” and other people “other” people.

As we have just seen, there is no such thing as a “good” and “bad” person because all is a matter of subjective, two-dimensional reasoning. A priest might be thought of as “good” by us, but “bad” by those he terrorizes and molests. A dictator might be thought of as “bad” by us, but “good” by those he lavishes generously with gifts. So then, the question isn’t, “Should good people suffer?” but, why do people suffer?

I am neither a good nor bad person, I am simply a person … but why should I suffer?

But why shouldn’t I suffer?

And, what exactly do I define as suffering?

Is suffering having something taken away from me that wasn’t mine, to begin with like a lover, child, or piece of land? Is suffering undergoing a terminal illness that will destroy a body that isn’t the reality of who I am? Is suffering facing insults, physical abuse or abandonment against an identity that doesn’t represent the truth of “me”? What is suffering?

As we have seen, all of life undergoes processes of demise, death, and loss – it is the yin to the yang of birth, growth, and gain. A lioness loses her cub in an elephant stampede. A fish is eaten by a shark. A forest is mauled by fire. An ocean is slowly poisoned and polluted.

Have you ever thought of Death as a teacher? Read 9 Truths Only Death Can Teach Us About Life

If you understand the interconnectedness of life your response will be, “No, we aren’t” but then you might hesitate. “But why do we suffer so badly? Can’t it ever stop?”