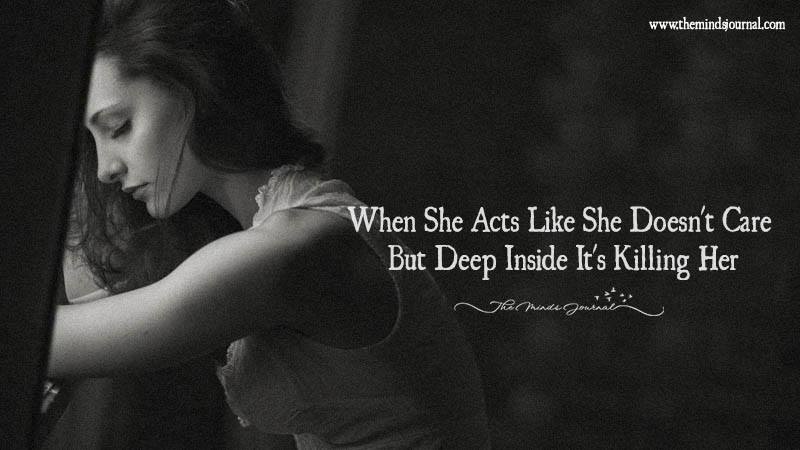 “Because what’s worse than knowing you want something, besides knowing you can never have it?”
― James Patterson

Honestly, nothing! It’s so comforting to be in denial. To put up that brave face and go on with life as if things are just in place.

Quite easy it is, to console yourself when you cannot afford that fancy ‘item’ in a store. It is because you know that will save some bucks. But what happens when real human emotions are involved? How does one come to term with themselves? Knowing it will only eat up your mental peace.

Here are 5 reasons why she acts the way she acts.

1. She is not bothered about it.  At least she looks as if does not care whether a guy she loves goes on with his life without thinking about her wherein, he plans ‘hang out’ with some other friends. To be honest, she feels extremely hurt and usually doesn’t express it.

2. If her texts to the guy remain unanswered for some times, or if the guy does not care to pick up her calls or reply to her texts, it literally kills her from inside but she shows that she scarcely cares about all these.

3. She is not ready to believe that she is falling for a guy so hard that she is gradually losing herself.

In fact, it is absolutely a nightmare for her to think that a boy can actually make her feel so helpless and crazy for him. In order to cover up for these feelings, she acts as if the guy is just another boy and is in no way ‘her guy’ because there can be no such concept. She is a strong girl bubbling with confidence and energy, ready to fight the battles in life and come out victorious in all the ordeals. She does not need a guy beside her. However, her heart speaks in a completely different note.

4. All those hours spent in front of the mirror are more than just making her feel good about herself, it unconsciously makes her wanting ‘his’ attention.

She earnestly wants the guy to distinguish her from every other girl. Things are not always the way we want it to be.This makes her go even more confused and she keeps on acting that she does not care about the guy.

5. She acts as if she is least bothered of the guy’s other relationships or intimacy with other girls but this particular thing is the most detrimental and saddening part in this case.

This continues to kill her every single moment although she still refuses to express her feelings .

“Let no one who loves be called altogether unhappy. Even love unreturned has its rainbow.”
― M. Barrie

It doesn’t necessarily have to be true for every girl out there. This is something, rather, more generalized assumptions given that people tend to act differently when they are not bestowed with what they desire.

Unrequited love is not rare. It is definitely not a life altering situation. Maybe it is what best for you. You never know what’s life has in store for you, maybe something better, something more delicious.