8 Steps To Recovery After A Controlling Relationship 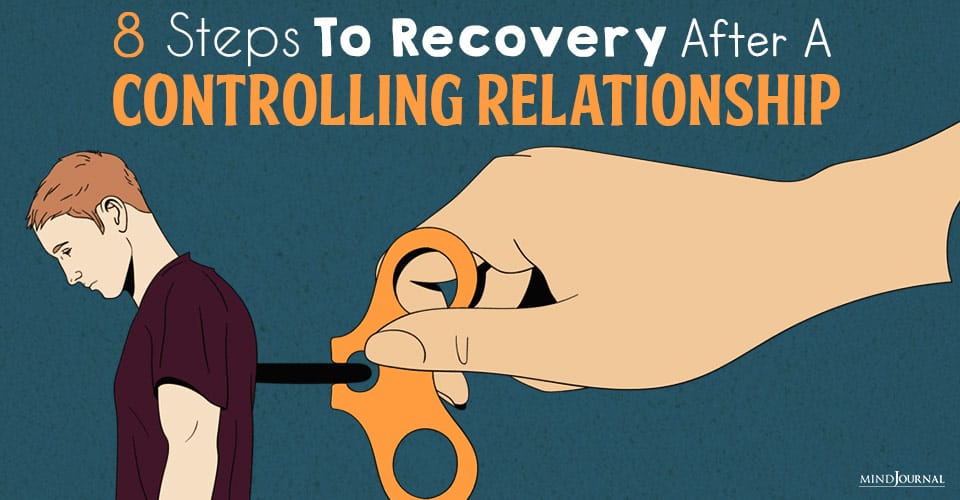 A relationship of coercive control can leave a deep damaging impression on one’s mind. While being physically free is easy, but healing emotionally and mentally is not really a very short process. But at the same time, it isn’t impossible for recovery to happen after a controlling relationship.

It takes a long time to recover from an abusive and controlling relationship. Being monitored, isolated, stalked, and abused leaves its mark. Below are suggestions for people who have left a relationship of coercive control. People who are still in such a relationship should seek help from a domestic violence advocate, even if there is no physical violence.

But beyond the break-up—before they can feel completely well again—victims/survivors need to focus on recovering. I’ve organized these suggested activities under the acronym RECOVERY.

Here Is How You Can Recover From A Controlling Relationship

1. Reclaiming activities that had been blocked by the abuser.

For instance, Sharon’s partner did not want her to go on walks alone. After separating, she felt a wave of liberation every time she laced up her walking shoes.

Being kind to one’s body by becoming physically active and eating well helps a person feel better all around. In a controlling relationship, many people become alienated from their physical selves.

For instance, Pat had no choice about when to engage in sex nor about what food to prepare for the family. Walking, yoga, dancing, lifting weights, stretching, bopping to the radio—all these can help survivors feel their vitality again.

Abusers deliberately separate their victims from others. Reconnecting with their social circle helps survivors regain support and a sense of themselves.

Abby’s husband made it difficult for her to visit her parents and complained every time she was on the phone with friends. Over time, she grew more and more dependent on him for all her social contact and her self-esteem plummeted. After their separation, Abby discovered that her loved ones were eager to spend time with her again.

Psychotherapists also provide important support for survivors and help them face the challenges ahead. To be effective with survivors, therapists must understand the concept of coercive control—which is still a new idea to many.

After Katrina moved out with her children, all the possessions she had been able to grab were in plastic bags and she despaired of ever feeling “normal” again.

Arranging her belongings into labeled boxes in her shelter room helped her feel more settled. She noticed that her children responded positively to a more orderly living space, too. A daily routine also helps organize one’s emotional life.

Sharing the true story of the relationship—in ways that feel right—can be empowering. Some survivors start by keeping a diary where they can be honest with themselves. Then they speak with selected friends and family who they know will be supportive. Telling one’s true story helps survivors cope with their feelings and may also have positive practical effects.

For instance, when Carla explained her home situation, her boss became much firmer about denying her ex access to the workplace and not giving him any information over the phone regarding Carla’s whereabouts.

Related Recovery From Abusive Relationships: How Long Does It Take?

Dancing. Drawing. Gardening. Singing. Many victims shut down creatively during a coercive control relationship, busily attending to their partner’s every demand. Releasing one’s creative side can be a step on the path to recovery.

When her abusive relationship ended, Chris began drawing cartoons and then repainted her apartment with vibrant colors. She loved choosing the paint herself and—room by room—as she wielded the roller she felt as if she was covering over bad memories and reclaiming the space as “hers” in a new way.

Some survivors compile a list of the controlling incidents that they experienced. The list helps them appreciate what they’ve been through and realize their own strength. They can take pride in the courage they showed, and look forward to a full life as a free person.

Greg kept a list on his computer. He added to it as he remembered abusive incidents. After a few months, he printed and read the list and began to appreciate how completely he had been subject to his partner’s control. Reviewing the list fortified his gratitude for being free and his determination not to allow himself to fall back into the relationship again.

Survivors need to learn to put themselves at the center of their lives. After structuring their time around the abusers’ demands, it can be difficult for survivors even to remember their own opinions and wishes. Abusers convince their victims that their opinions are stupid and wrong, leading victims to change the way they view themselves and the world.

Stark (2007) has referred to this elimination of a victim’s perspective in a coercive control relationship as “perspecticide.” Survivors often hear the abuser’s critical voice in their heads. It is important to learn to replace that voice with a kind one.

When Maria finally persuaded her boyfriend to move out, at first she felt lost without him. She felt as if she wasn’t herself and couldn’t remember how she had once lived without her boyfriend’s constant demands and presence.

Over time, she rediscovered her own opinions and began to re-engage in hobbies that she had once loved. She began to enjoy spending time by herself and with friends and family, without having to check constantly for her boyfriend’s approval.

Related: 5 Things I Did To Heal from an Abusive Relationship

It is natural for survivors to feel fear and regret from time to time. Looking ahead will give them hope. It is usually best for survivors to separate themselves as much as possible from the controlling person and his contacts, so they cannot be controlled or monitored through someone else (Of course, this will take a different kind of planning if they share young children).

Survivors can look forward to a fulfilling life after ending a Coercive Control relationship. Recovery does not happen overnight but with time–it does happen.

For more information about Coercive Control, check out these books:

Trying to recover from a controlling relationship does not happen in the blink of an eye – it takes a lot of time to move on from all that toxicity and trauma. Don’t be too hard on yourself, and take one day at a time. Give yourself time, and treat yourself with kindness, and eventually, you will be able to go back to being the person you were before.

Lisa Aronson Fontes, Ph.D., is a Senior Lecturer at the University of Massachusetts Amherst, and author of numerous publications including the books: Invisible Chains: Overcoming Coercive Control in Your Intimate Relationship, Interviewing Clients Across Cultures, and Child Abuse & Culture: Working with Diverse Families. She has dedicated two decades to making mental health, criminal justice, and social service systems more responsive to culturally diverse people. Fluent in Spanish and Portuguese, Dr. Fontes is a popular trainer, consultant, and speaker for audiences around the world.View Author posts

11 Crazy-Making Behaviors Of A Covert Narcissist

Someone commented on one of my videos a while back, saying that she learned about covert narcissism by literally Googling the term crazymaking behavior. That sounded like a perfect description of what it’s like to be with a covert narcissist.

That comment also made me incredibly grateful that there are so many resources available on this topic today that someone could Google crazy-making behavior and discover that they’re in a relationship with a covert narcissist.

I hope you’re ready to hear about the eleven crazy-making behaviors that are incredibly common with the covert narcissist because that’s exactly what we’re going to cover.