Perfectly Hidden Depression: Five Steps To Take Off the Camouflage of Perfectionism 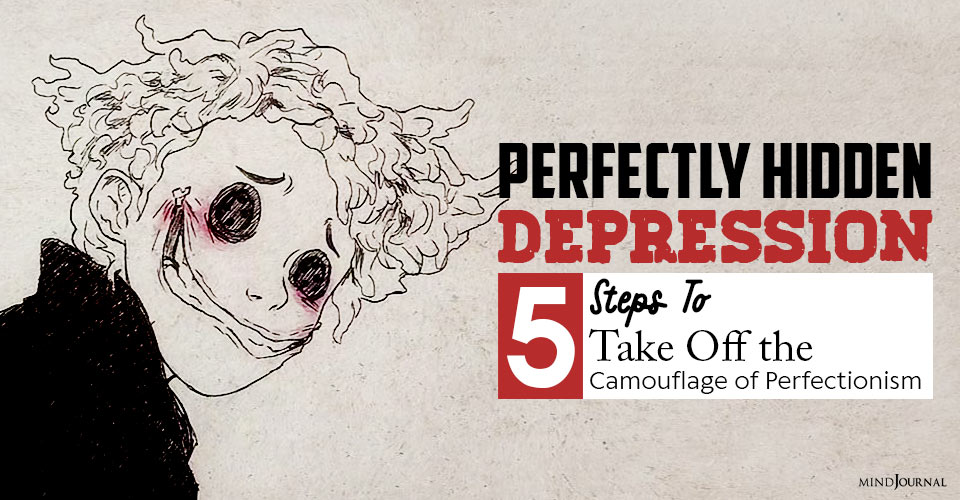 Do any of these ring familiar to you: perfectionism with an inner constant critic, over-responsibility, inability or great difficulty with expressing emotional vulnerability, chastising yourself if you’re not counting your blessings, always being there for others, but sharing very little of who you really are or what problems you might have?

These are five of the ten traits of perfectly hidden depression; they ensure that the perfectionist mask cloaking your silent depression remains intact.

Researchers such as Paul Hewitt of the University of British Columbia are sounding the cry that perfectionism can be a helpful trait, but that it can also be also linked with self-dissatisfaction and can create significant stress on your body. It doesn’t end there;  it’s also being shown that perfectionism can cause even greater damage.

Related: 17 Signs You Are An Overachiever And How To Deal

How can perfectionism be fatal?

Several studies within the last decade have reflected a strong correlation between perfectionism and suicide, including findings that 70 percent of 33 boys and young men who had killed themselves were described by their parents as placing “exceedingly high” demands on themselves.

The New York Times quotes Gordon Flett, a lead researcher of perfectionism and co-author of the new book, Perfectionism: A Relational Approach to Conceptualization, Assessment, and Treatment, says, “It’s natural for people to want to be perfect in a few things, say in their job — being a good editor or surgeon depends on not making mistakes. It’s when it generalizes to other areas of life, home life, appearance, hobbies, that you begin to see real problems.”

Why is this so scary? Because if you’re perfectionistic, you’re likely also really good at hiding pain.

So what would cause you to want to change? After all, who wouldn’t want the perfect-looking life? Who would want to change a formula that leads to professional success? Why mess with seeming perfection?

Because at some point the end no longer justifies the means. Eventually, the burden of isolation, the despair of closeted-off feelings, or the suicidal urges to end the charade become too great, so much so that you might come to tell a good friend or a parent about your struggles or even go into a therapist’s office for help.

The five stages of healing… the Five C’s…

There are five basic steps basic for all change to take place. I’ve termed them, “The Five C’s Of Healing.”

First, you have to identify a problem as a problem before you can change it. Specifically, you have to recognize that you’ve been hiding your true internal experience of depression for years, creating a persona that looks good to others, and that you believed served to keep you safe.

Related: Why Being Good Enough Is Better Than Being Perfectionistic

The second step is Commitment to a process that will be difficult, and involve not only change with yourself but change with others. Your perfectionism can raise its head in strange ways, through impatience with yourself, intense self-criticism, or pushback from others.

Almost simultaneously, the third step is taking shape, which is Confrontation of irrational beliefs and rules that may have kept you safe and secure as a child, but no longer lead you to thrive as an adult. They may even be holding you back and distorting the boundaries of what you believe is possible.