The Ten Attributes of a Toxic Narcissist: Is There One In Your Life? 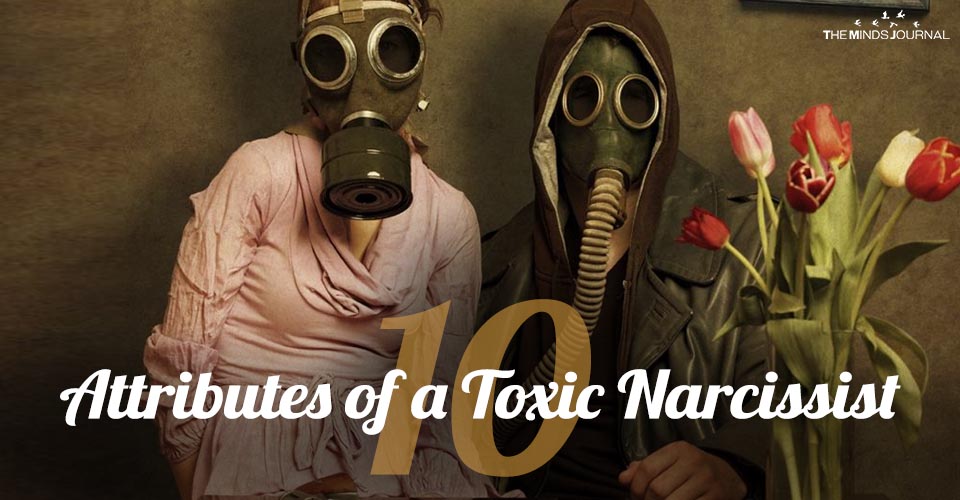 Most narcissists are relatively harmless. They’re more selfish and self-serving than the average person, but they’re still capable of caring about others, which prevents them from doing too much harm.

Some narcissists, however, are toxic. They’re dangerous because they don’t play by the rules. They’ll lie, cheat, manipulate, threaten or attack in order to get what they want, with no concern about the casualties they leave in their wake. The only person they’ll ever care about is themselves.

It’s important to recognize the toxic narcissists in your life because they can do a lot of damage if you don’t identify them as soon as possible.

There are ten attributes of a toxic narcissist that everyone should be aware of. Knowing this might protect you from getting taken in by such a con artist, and hopefully, keep you from getting hurt.

The ten attributes of a toxic narcissist are as follows:

They may pretend to care but they’re constitutionally incapable of doing so. It doesn’t bother them if they hurt you; they can even believe that you deserve to be hurt, for example, if you’ve gotten in their way.

Want to know more about a toxic narcissist? Read The Science Behind The Toxic Relationship Between An Empath And A Narcissist

2. They’re unable to take responsibility for their actions.

They’re prepared to sink to depths you could never imagine, but they’ll always find a way to blame other people or make excuses for themselves. No matter how egregious their behaviour, it will never, ever be their fault.

In fact, when accused of wrong-doing, the toxic narcissist will become enraged and try to bully you into submission, or they’ll play the victim and accuse you of attacking them.

They feel like they have the right to do whatever they please, regardless of how others will be affected.

5. They become furious when challenged.

They become outraged when questioned or defied, and they’ll try to punish anyone who interferes with the pursuit of their goals. They don’t have the limits on their behaviour that normal people do, so their acts of retaliation can be extreme.

Ever been in a relationship with a toxic narcissist? Read How A Narcissist Plays You And How Their Cycle Of Abuse Works

6. They can be charmingly manipulative.

They can be incredibly seductive but will turn to ice when you’re no longer useful. As long as you have something they want, they’ll pretend to care about you, but when you’ve outlived your purpose, you become irrelevant, perhaps even a liability.

If in the course of your acquaintance, you learn things about them that makes them feel vulnerable, you’re now a threat that needs to be silenced.

They see every person, object, opportunity or advantage in the world as a finite set of commodities to be consumed by them alone. If they perceive you as competing with them for this supposedly limited number of goods, they’ll project their own worst qualities onto you, and accuse you of being “selfish,” a “con artist,” or a “thief.” If you appear to be too much of a threat, they’ll do their best to cut you out of the competition.

8. They will attack if they feel that their territory is being encroached.

They always need to be in the position of greatest power. If you go head-to-head in competition with a toxic narcissist, whether it’s for a lover, a job, a political office, beware, because they’ll stop at nothing to win.

Dr. Marcia Sirota is an author, speaker, coach, and psychiatrist. She's the founder of the Ruthless Compassion Institute and author of Be Kind, Not Nice: How to Stop People-Pleasing, Build Your Confidence and Discover Your Authentic Self. Her areas of expertise include addictions, workplace burnout, co-dependency, interpersonal communication, leadership, and empowerment.View Author posts