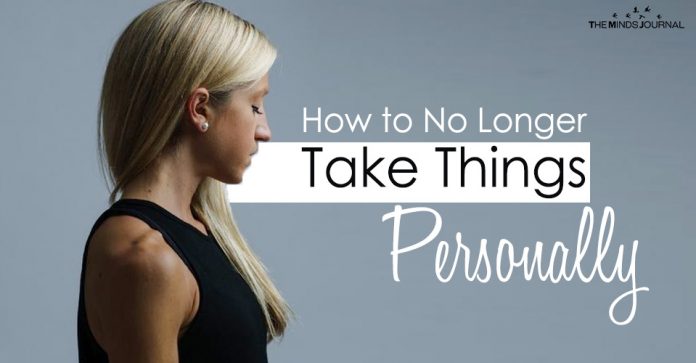 How to No Longer Take Things Personally

Don’t take anything personally. Nothing others do is because of you. What others say and do is a projection of their own reality, their own dream. When you are immune to the opinions and actions of others, you won’t be the victim of needless suffering. ~ Don Miguel Ruiz

We live in a world where people’s negative emotions are more dominant then positive emotions. Where people use unkind and unloving words to talk to, and about, each other. We project back our insecurities, jealousy, hatred onto other people and create a negative environment. In turn this negativity makes us unproductive and lowers our spiritual vigor.

How do you deal with such negativity?

There are always alternative ways to deal with negativity than to return back the negativity.

Here are 10 ways to No Longer Take Things personally and live in peace and harmony.

But it is not what I am saying that is hurting you; it is that you have wounds that I touch by what I have said. You are hurting yourself. There is no way I can take this personally. ~ Don Miguel Ruiz

People are unconscious about their deepest fears, insecurities and they keep projecting their own darkness, ideas, deepest desires, inner conflicts and struggles onto those around them.

What people fail to realise is that the problem lies inside and not on the outside. But it is comparatively easier to reflect our unconscious desires onto others rather than looking them in the eyes and facing them. And that most of the things people say and do, have little, or nothing, to do with the people they are “describing”, but a lot to do with who they themselves are, and the internal struggles they are facing.

People’s words, ideas, thoughts, behaviours are influenced by their past experiences and their unconsciousness. Their words don’t describe the people they are “attacking”, nor do they reveal who others are. But rather they reveal the pain, the suffering, the darkness and the many wounds that are present within them.

It is always good to remember that human beings are generally constructive in nature and have no intentions of destroying others. How they treat you is most often the reflection of their unresolved inner conflicts.

2. Don’t give it too much attention.

Thoughts have power, creative power. And since there are no idle thoughts (for every thought you think creates a belief, belief that you will later on craft your reality on), the more you dwell on the negativity, the more it hampers your mental health.

It is crucial to not always focus on the negative words people speak about you. In contrast, try to imbibe the positive words your well-wishers shower on you. For words are very powerful tool to influence anyone, negative talks have the power to poison your heart, your mind, your body and your life.

People tend to be generous when sharing their nonsense, fear, and ignorance. And while they seem quite eager to feed you their negativity, please remember that sometimes the diet we need to be on is a spiritual and emotional one. Be cautious with what you feed your mind and soul. Fuel yourself with positivity and let that fuel propel you into positive action. ~ Steve Maraboli

Recognize that nobody knows you better than you do. So the ideas people hold about you are their personal attributions about you. It has no power to change what you are, however malicious it is. Never make other people’s opinions of you a priority over your own opinion about yourself.

If making myself angry is… Read more »