Toxic people can be extremely venomous sometimes, and it can be a real challenge to heal from the cruel words of a toxic person.

It was the perfect day.

My husband and I spent the day with our kids walking through the park. Close friends from out of town we hadn’t seen in years joined us.

The weather was gorgeous. Our kids were laughing. Everything felt so peaceful and happy.

After we said goodbye to our friends we went to grab an early dinner. We found a restaurant we loved that allowed our dog to sit outside with us. The perfect ending to our perfect day.

Until she showed up… 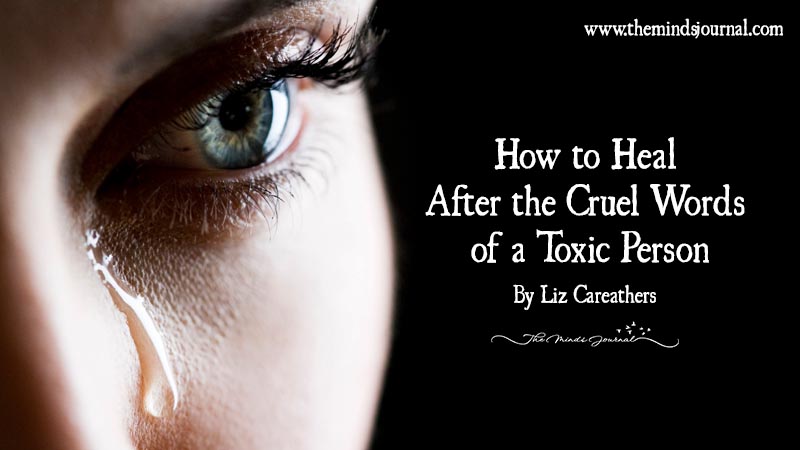 An old woman walked by and sat down at the table next to us. She told the waitress she wasn’t going to order anything, she was just resting. There was something odd about her, her eyes were ice cold. I wondered if she was homeless.

As she sat there, she began to stare at us, wickedly.

Before we knew it, she started yelling at us. Calling us “disgusting pigs” and making comments to the wait staff about my dog.

She continued to harass my family and even got up and walked closer to our table yelling all sorts of nasty things at us, most of which were aimed directly at me. Given our mixed raced family, I couldn’t help but wonder if her comments were racially motivated.

I could feel every cell in my body filling with anger. Who was this nasty woman who was ruining our dinner and who dared to act like this in front of young children?

I wanted to shout a few choice words at her but my kids were there. I felt so much pressure to both protect them and set a good example for them on how to handle confrontations. But truthfully, I had no idea what to do…

I finally told her that if she didn’t back away from our table, I would call the police.

She responded “Good, call them so I can tell them what a disgusting pig you are!” as she waved a crooked finger in my face. I said okay. And I dialed 911.

In the meantime, the manager was trying to get her away from the restaurant, but she refused to leave and continued to stand there, screaming at us. When she finally heard me on the phone with the police, she quickly walked away. A true coward.

By the time the police came, she was gone. They mentioned they’ve received several calls about a cranky old lady in the neighborhood who harasses people.

Now, I knew this woman was crazy, but as a sensitive person I’m extremely affected by other people’s energies and words and her venom had completely consumed me. Every cell of my body felt enraged, shaken and angry. I felt like our entire day had been ruined by this ten-minute ordeal.

And I even had the creeping feeling that maybe, somehow, I was deserving of such abuse…

The Choice You Must Make

Just a few minutes after the police left, an old man walked by our table as we were still trying to gather ourselves. He looked at us with our young kids on our lap, dog at our side, and said:

“Enjoy guys, these are the best years of your life…”

His expression was so kind, and his simple words were so full of truth and love.

It was as if, within a span of just a few minutes, we had received messages from both the darkest and brightest sides of humanity, and it was up to us to choose which side we internalized.

I wanted so badly to embrace the message from the wise old man, but it was the mean old lady whose words infected me entirely. I could barely think about what that man had said, let alone be present for my daughters. And that frustrated me even more.

I was determined not to let this woman win the war for my thoughts so I did everything in my mental power to work through the experience and pull my thoughts out of her icy grasp.

Lizhttp://strongsensitivesouls.com
Liz Careathers writes to empower her readers at StrongSensitiveSouls.com while raising her two little girls. Gain instant access to her free Sensitive Soul’s Guide to Reducing Stress & Overwhelm to help you live peacefully and confidently as a sensitive soul.

Tonic immobility: Why do women freeze up or smile when they are the target of a sexual offense?
Read more
Abuse

Feeling Discouraged? 7 Ways To Respond To People Who Bring You Down

What to do when your happiness triggers an avalanche of negativity in others.
Read more