11 Manipulative Techniques Narcissists Use To Control You 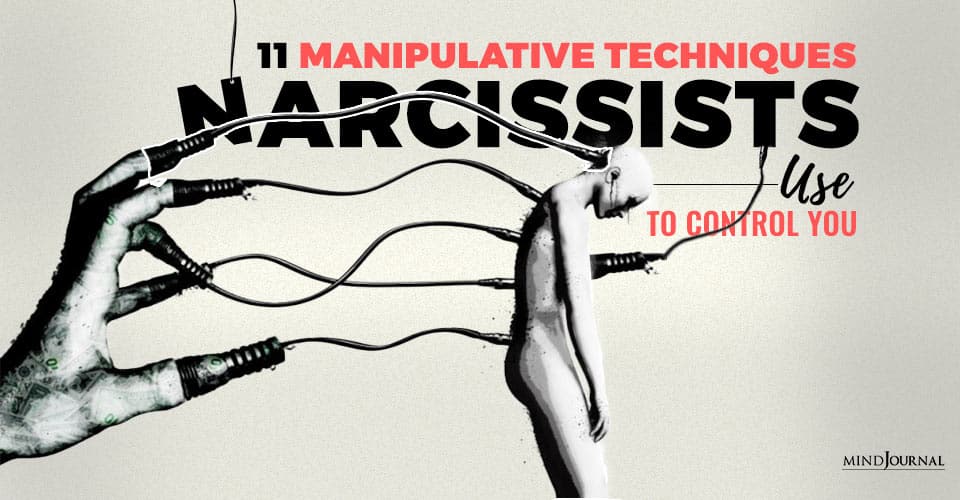 You are probably wondering how narcissists control you. But who are narcissists and why do they have this obsessive need for controlling people? Narcissists are people who are self-obsessed and like to control others for their personal gain. They use certain techniques to control other people, usually empaths and codependents.

Narcissistic personality disorder is a psychological condition where an individual requires constant praise, approval, and reassurance for feeling important. They need continuous validation to feel good about themselves. Many narcissists deliberately create toxic situations so that they can receive regular attention and importance from other people. They usually target people who are susceptible to their initial charm, unsuspecting to their manipulation, and vulnerable to their exploitation.

No matter where they go, they need a constant supply of narcissistic supply, AKA someone stroking their ego to make them feel good about themselves. The American Psychological Association found that 9.4 percent of Americans in their 20s had experienced Narcissistic Personality Disorder at some point in their life.

They usually feel empty inside and have fragile self-esteem which leads them to resort to dubious measures to make up for it. It is important to recognize how a narcissist controls you so that you can stay away from them, and protect yourself.

Here is a list of methods narcissists use to exercise control over their partners, spouse, and other people who are close to them. Let’s find out how narcissists control you and how can you recognize it.

Related: 16 Signs of Insecurity in a Narcissistic Person

11 Techniques Narcissists Use To Control You

They often target people who are codependent. Codependency happens when someone feels responsible for other people’s feelings. Codependents often find themselves in relationships with narcissists. The narcissist can easily manipulate the shortcomings of the codependent and make them believe that it’s their fault or they have to take responsibility to fix any issues in the relationship.

The partner becomes so afraid of the narcissist that they lose their sense of self by believing in all the mind games they play. The codependent is often found to fall for a narcissist because they love the attention they initially get from the latter. On the other hand, the narcissist works towards gaining complete control of the relationship when the codependent starts to sacrifice their personal desires and boundaries, to make the narcissist happy.

They go out of their way to make their partner feel special. However, it’s not because they value their partner, rather, it’s only a means to manipulate them more. They use romantic manipulation to lure you into their trap. Narcissists control you by love bombing you at the beginning of the relationship just to make you believe that they are head over heels in love with you.

However, their ulterior motive is to make you helpless and vulnerable once a certain amount of time passes, and they show you their real face. They make you feel special in the beginning so that they can mold their partner according to their will.

They try to gain control over their partner by using shock, awe, and guilt. In the beginning, the narcissists attempt to sweep you off your feet. Expect grand romantic gestures, sweet romantic talk, dates at a fancy restaurant, and whatnot. All these are done to manipulate you and bait you into their trap. Once the love-bombing phase is completed, the narcissist moves on to difficult emotions to maintain control. These emotions tend to erupt when you have done something to disappoint them.

Normal people find such extreme emotions strange and exhausting. Hence they tend to work hard to avoid such emotional outbursts. Guilt trapping is their only way to exercise control. The narcissist will make you feel guilty about the behaviors that they think are signs of disrespect. They never think twice before twisting your words against them and making you feel guilty.

Related: How A Narcissist Grooms You For Love: 4 Tricks To Watch Out For