The psychology of hate

Although it’s not possible for us to like each and every person we know and meet, it is also not necessary that we hate everyone. Yet, if you find yourself wondering how you hate people, then you need to take a better look at the psychology of hate and why we hate people.

Read also: Psychology Of Mean People And How To Deal With Them

Here are some psychological reasons for why you might hate people based on the psychology of hate:

1. You have high expectations

2. You are afraid of others

We are often afraid of people who are different from us. Even though you might not admit it, when someone shares different views, perspectives, opinions, beliefs, attitudes, mentality and even physical features, we tend to hate them. Why? Simply because they are different, says licensed psychotherapist and author Allison Abrams, LCSW-R. She explains “According to A.J. Marsden, assistant professor of psychology and human services at Beacon College in Leesburg, Florida, one reason we hate is because we fear things that are different from us.”

This is perhaps due to the in-group out-group theory according to behavioral researcher Patrick Wanis. In social psychology, the social group which you can psychologically relate with and identify yourself as being a member of is an in-group. Contrarily, the social group with which you can’t personally identify is an out-group. So, when you feel that there is a threat from certain outsiders, you will seek the support of your in-group. Hence, hatred is a survival mechanism as per the psychology of hate.

“Considerable evidence suggests that dividing the world into Us and Them is deeply hard-wired in our brains, with an ancient evolutionary legacy,” writes author Robert Sapolsky. He adds “Humans universally make Us/Them dichotomies along lines of race, ethnicity, gender, language group, religion, age, socioeconomic status, and so on. And it’s not a pretty picture.”

3. You are afraid of yourself

When we feel insecure about our own selves and are unable to accept our own flaws, deficiencies and imperfections, we start to cope with those insecurities by blaming and hating others. Clinical psychologist Dana Harron says that what we tend to hate about other people are the exact things we are afraid of ourselves. We use the targeted person or the group of people we hate as a blank canvas upon which we project those parts of ourselves which we refuse to acknowledge. It’s like we telling ourselves that “Nothing is wrong with me, it’s you who is terrible.” 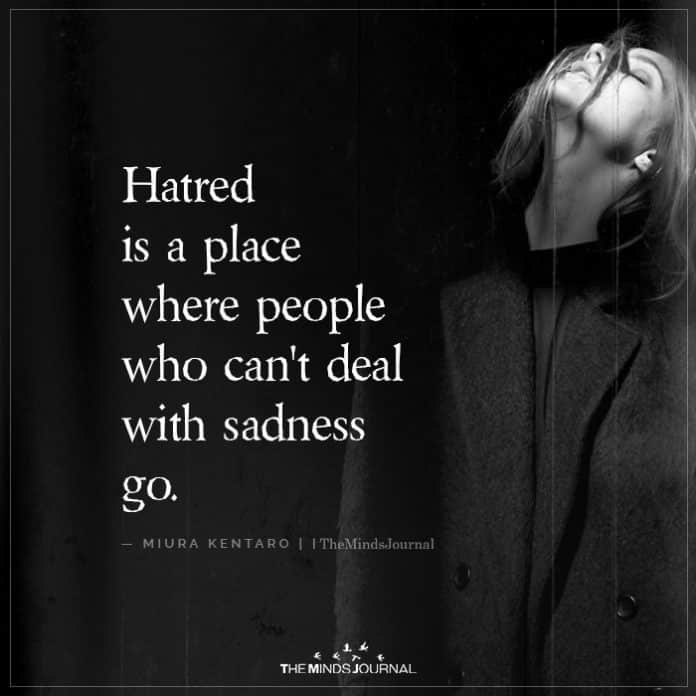 This is known as psychological projection which is a defense mechanism we use subconsciously to deal with complex and difficult emotions. It includes projecting our undesirable feelings onto another person, instead of accepting or coping with such unwanted emotions. It is our need to project our bad aspects outwardly to see ourselves as good, says Allison Abrams, LCSW-R.

Why would compassion and kindness… Read more »

Tired of the Human Race

How Self-Awareness Can Improve Your Relationships?

If communication is at the heart of a healthy relationship, how can self-awareness help?
Read more
Mind and Brain

According to the Dunning-Kruger Effect, people who have little understanding about a topic, generally overestimate their capability and knowledge about it.
Read more
Lifestyle

Is there someone in the world who looks exactly like you? Is it even scientifically possible to have a doppelganger?
Read more
wpDiscuz
49
0
Would love your thoughts, please comment.x
()
x
| Reply