11 Things You Didn’t Know About An Empath 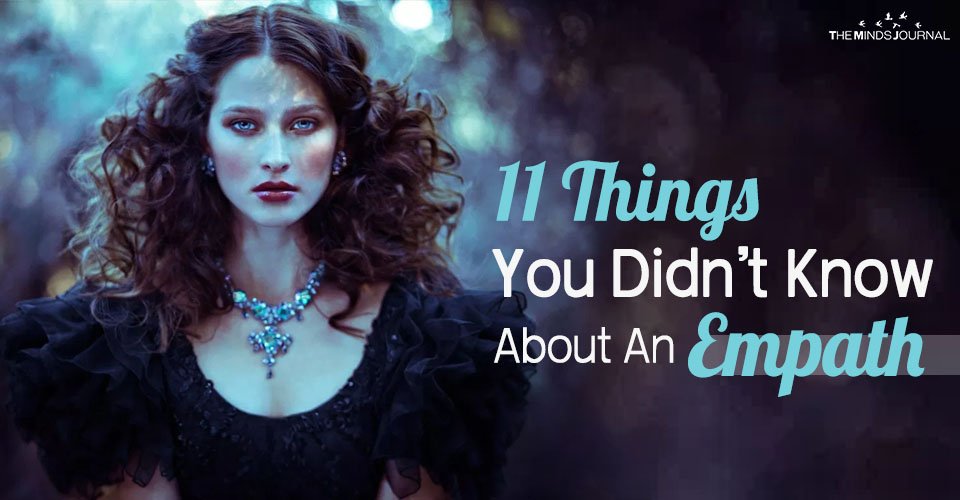 Let us just start by saying that if you are around an empath, this means that you are very lucky.
Aren’t they just the nicest people? Always there to help you out and to listen to your stress and problems and always trying their best to help you out and ease out your troubles.

But the thing is, all this comes at a price.

Yes, the empaths pay a price for helping and reaching out to others.

Yes, they do and it is in terms of their own energy and emotions.

Empaths constantly find themselves exhausted and depressed and they feel that no one really knows them well.

They really feel very deeply misunderstood and they reach a level of pain where they start to hide things from the people around them.

So, here is a list of things that the empaths around you must be hiding from you. It’s time you pay attention to the empaths as well.

1) They won’t show how sensitive they are to their surroundings:

Empaths are highly sensitive to the things that happen around them. But somehow, they resist showing this sensitivity to the people around them.

They do so because they don’t want to hurt the feelings of the people around them.

Empaths feel that the people around them are already very stressed and thus they don’t show their feelings in order to safeguard others.

But, in the process of hiding these feelings, they end up being sad and broken themselves.

They have the uncanny ability to suck all the emotions around them.

This means that they can absorb all the emotions of people around them and in this way they can really help out those people.

3) They are shy and like to be left alone:

You may assume that an empath who is constantly engaging with people around him/ her would love to talk to people and be with people.

But in actuality, empaths are just very shy. They love their time alone and they love spending that time recuperating from the overwhelming emotions that they handle all the time.

4) They love the company of nature:

Empaths love to spend time in nature. They accumulate the energy of nature and use it to heal people. Even a small short walk in the park makes them happy and stress-free.

5) They know when you lie to them:

They can absolutely figure out when you are lying to them.

This is because they have seen almost all sorts of people around them and this extreme engagement with the people makes them aware of who the genuine ones are and who are just lying to them.

So, don’t lie in front of an empath.

Sometimes, they feel that they are giving too much to the world and receiving too less.

These are the times when they are exhausted and tired and they have no energy to deal with the emotions of other people.

But somehow, empaths heal themselves and come back to help the people around them.

Social Parasites recognize the empaths and use the empaths to dump all of their negative emotions and stress.

Parasites are very smart because they know that the empaths are so soft that they won’t deny helping them. Thus, they feed off the energy of the empaths.

8) Intuition is their thing:

Empaths have a very good intuition. They are actually naturally intuitive.

This can also result in them having dreams and visions about what is happening to people around them.

If an empath warns you about something, take it seriously.

9) Sometimes, they get really stressed out:

Sometimes, the world becomes too much for them to take. And this is when they have a mini breakdown.

They become stressed and anxious because they have to deal with the emotions of so many people around them.

The negativity of the world also breaks their hearts, but somehow they still try to carry on as if nothing has happened.

As we said before, empaths are soft targets. So they easily get used by others and this might also take a toll on the energy and the well-being of an empath.

But, people continue to use empaths as if empaths are doormats. It’s sad but it is absolutely true.

There is no love like the love of an empath. They give so deeply and they care so much.

The love of an empath will totally change your life and at the same time, it will make you a better person as well. You will be lucky to be loved by an empath.

Well, if you know an empath, try to help them out in the same way as they are helping everyone around them.