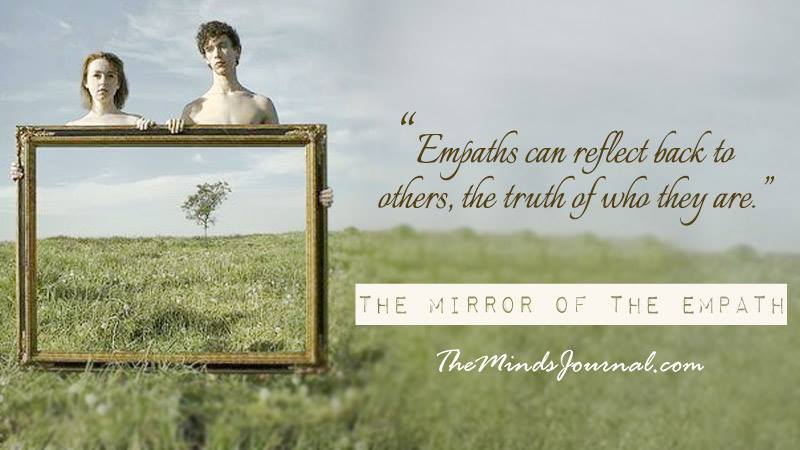 The Mirror Effect of an Empath: We have all experienced it, being around someone who has either taken an instant dislike to us, or a bizarre resentment suddenly appears in those we have known for some time.

We may have no idea why the other feels this way, as we certainly have not given them reason to have such repugnance towards us. No matter whether they try to hide their feelings or not, we can still sense their loathing and it does not feel good!

Someone taking a dislike to another is a completely normal and acceptable part of life with everyone. We are all different and there will always be some people we do not get along with, whether Sensitive or not. For example, the first impression the Empath has when we first meet someone is always spot on, as to whether we could like or trust that person.

This is due to having a strong sense of intuition and the ability to unconsciously read others.

However, what can be baffling to the Empath is why some people act in such an animostic way towards us, when we know ourself to be a likeable and trustworthy person. Often we are not given a reason when someone suddenly changes towards us, becoming cold and uncaring almost overnight. It can just leave us scratching our head.

3 Reasons Why People Instantly Dislike or Like an Empath

Through observations and contemplations I have come to discover there are three main reasons why people either cool off or take an instant dislike towards the Empath and here they are:

1. The Mirror Reflecting Back

One of the main reasons others can have an aversion to the Empath is because we reflect back to them the truth of who they are. It is so common for people to act in an inauthentic way to hide who they truly are, that many do not question their own motives or try and change their behavior. The reason most people hide a side of themselves is because they don’t like certain aspects of their personality. It may be that they are insecure, they may feel deep shame about themselves, or they may hide a trait of their personality because they do not believe it will be liked or accepted by others. On the darker side of the spectrum, some may hide aspects of their personality in order to manipulate others. However, for the majority of people who put on an act, they do so simply to fit in. The fear of being judged or disliked, for what they don’t like about themselves, makes some wear a mask when out in public. Even those of a Sensitive nature will put on a face when out in the world (partly because we know we would look like complete fruitcakes if we showed how we really felt inside). There are some, however, who never remove their mask and go through life with a false identity.

When one comes face to face with an Empath there is no hiding from these concealed traits; the mask comes off and they are displayed in full view. The traits one has worked so hard to hide or deny are now being waved in your face and can cause a torrent of ill feelings to surface, which will often be directed towards the Empath.

Because being with an Empath can bring up intense feelings in others, it can be the root cause of a strong loathing. However, what those who encounter this won’t realize is that the intense dislike they have towards the Empath is simply a reflection of their hidden side. The truth of who they are and aspects of their personality, they hide because they don’t want to admit to having, are revealed. Anything hidden becomes seen within the ‘Mirror of the Empath’.

Because an Empath picks up on other people’s emotions, hidden behaviors and true personality traits, we can take them on and thus project them back out to their rightful owner. We can wear other people’s truth like the mask they hide behind; even if we are consciously unaware that we are doing it. In the days before we become aware that we are an Empath, we may mistake these insecurities as our own and have no idea that what we feel, we can then project and reflect back.

Diane Kathrine
Diane lives in Manchester, UK. She spent the past twenty years researching everything from human anatomy to the law of attraction. She is a qualified colour and crystal therapist, massage therapist, reflexologist, aromatherapist, healing practitioner, yoga and meditation teacher, and has done in-depth research into diet and nutrition and how it affects Sensitive people. In 2011 Diane wrote ‘30 Traits of an Empath’. The article has been read and shared millions of times and was just the start of her journey to assist and help re-balance the Empaths of the world.

10 Best Ways To Better Your Life While Self Isolating

Stuck at home! and don't even know for how long? Here's what you can do to better your life while self isolating.
Read more
Coronavirus

If you notice that you avoid difficult things, get easily flustered under pressure, or tailspin and lose control when bad news comes your way, this will help you immensely.
Read more