What is the Real Connection Between an Empath and a Narcissist? 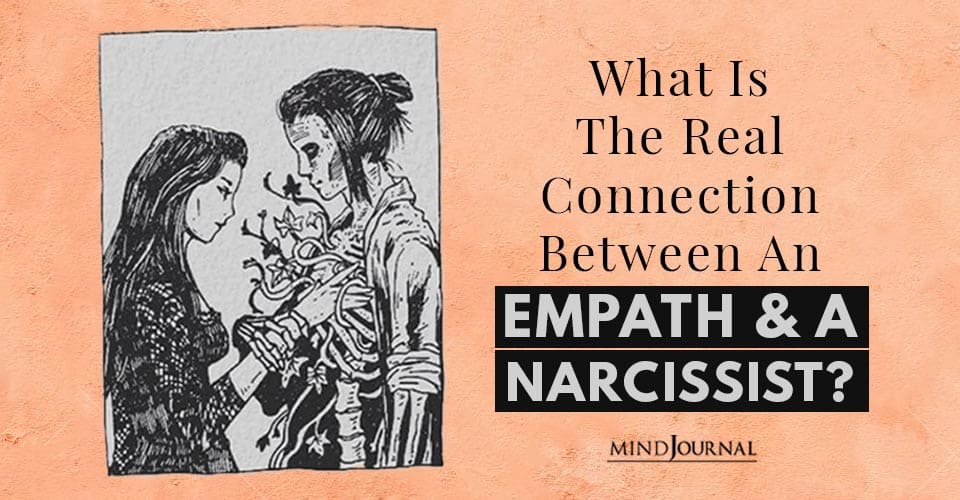 The story of the toxic connection and attraction between an empath and narcissist is as old as time. It’s more like a moth to a flame.

When I started writing for the Empath, back in 2011, there was very little accessible material and this was one of the reasons behind my compilation of the ‘Traits of an Empath’.

I wanted to help others uncover who they were, understand why they felt all they did, and work to become empowered.

Nowadays there are many new blogs and groups aimed at helping the Empath find their inner-light, which means more are awakening to their true potential.

However, with this Empath uprising, we are witnessing, it appears there has been an upsurge within the ‘dark side of sensitive’. This is observed with the rise of the narcissist and those encompassing narcissistic traits.

What Makes a Narcissist?

Although the term narcissism originally stemmed from having extreme vanity, today it represents so much more:

The definition of a narcissist is:

A psychological condition characterized by self-preoccupation, high self-esteem, a distinct lack of empathy, excessive self-admiration, and a tendency towards selfish or resentful behaviors.

But there are many more dark traits associated with this type of disposition such as one-sidedness, a manipulative nature, unrealistic expectations of others, excess need for control, and a huge sympathy deficiency.

In some cases, the traits of a narcissist match up with a psychopath.

Where you find an Empath, you often find a narcissist nearby, or at least those who display several narcissistic traits.

In fact, if an Empath takes a peep into their past they normally see a pattern of people displaying the above tendencies appearing throughout their lives.

There are some who would argue that an Empath and narcissist are two sides of the same coin. And although I certainly agree they both have heightened levels of sensitivity they are expressed in opposite ways.

The Empath’s sensitive side may breed and feed their emotional pain but it also contributes to their consideration, compassion, and abundance of empathy.

The narcissist’s sensitive side also contributes to their inner-pain but, in many cases, their wounds bred bitter, resentful, and vengeful tendencies.

And when a narcissist has been offended it is often the result of a wounded ego as opposed to a pained soul—as in the Empath’s case.

It may make you wonder why an Empath often has a lifelong history of run-ins with those who display narcissistic tendencies.

Could it be nature’s way of finding balance with opposing forces being drawn together?

Might it simply be due to the increase in hypersensitive behaviours?

Or is the law of attraction at work? Although there is a plausibility for all three suggestions, the latter is something we need to be aware of. Like attracts like: sensitive attracts sensitive.

There is no doubt about the fact the two types are both sensitive, but though the Empath and narcissist fall under the umbrella of ‘sensitive’ they are at opposite ends of the spectrum.

I first recognized the similarities in sensitivities between an Empath and a narcissist when I happened across a post on covert narcissism. Which I wrote about here.

I previously believed an Empath and a narcissist couldn’t be more dissimilar. But the article allowed me to discover how a sensitive streak can splinter out into diverse behaviors.

There is no doubt about the fact that an Empath and a narcissist are both highly reactive, sensitive people, but it is how they portray and integrate the sensitivities that set them apart.

A sensitive nature can be seen in kindness, compassion, and empathy, but it can also be seen in bitterness, resentment, and jealousy.

And it doesn’t take much working out to figure which traits belong to which type.

Another observation of mine is that sensitivity tends to run in families. And this, I believe, is why we witness Empaths and narcissists within the same bloodline and even between siblings.

The family ties and ‘sensitivity splinters’ explains why there are so many sensitive warring families. And it is through blood ties that Empaths find themselves bound to toxic narcissistic connections.

The law of attraction also plays its part in these destructive unions, as many Empaths find themselves dating a narcissist or in a relationship where their chosen partner, although not necessarily self-important themselves, has been raised within a narcissistic family.

Related: 13 Ways Being Raised by a Narcissist Can Affect You

Although narcissistic types often play the part of an antagonist in the Empath’s life, causing distress and even heartache, there is normally always a significant reason.

The further I travel down this ambiguous road, the more I see the higher purpose served behind the dark behaviors displayed by individuals.