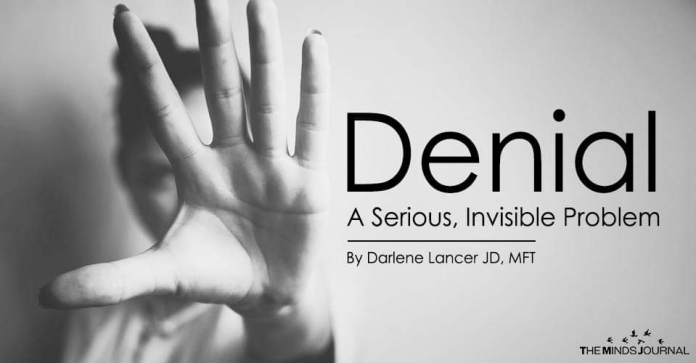 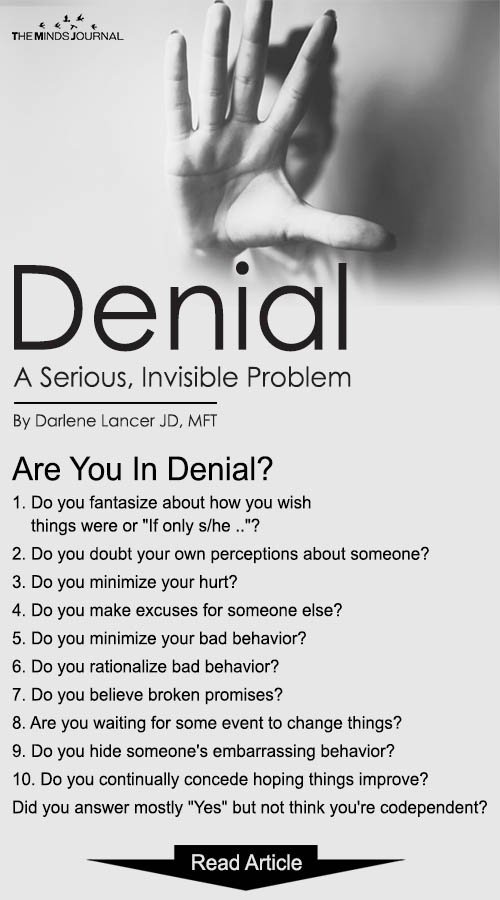 Denial is serious. It’s a refusal to acknowledge truth or reality.

Sometimes, it has benefits, but it can also be our undoing and can have life-threatening consequences. It affects not only individuals. “Group-think” can be particularly dangerous on a group level. Sub-cultures, religious sects, organizations, and political zealots can deny abuse, addiction, racism, genocide, corruption, and criminality. We can deny positive input as well as negative. Denial can restrict us from expressing our rights, our power, and our abilities, diminishing our self-esteem and capacity to pursue our goals.

Denial may be conscious but is usually unconscious. We all do it. We not only deceive ourselves, we forget, excuse, rationalize, and minimize.

We might be aware of the facts, but deny or minimize the consequences, or even acknowledge them, but stubbornly refuse to change or get help. It can be tricky to uncover something that is unconscious. 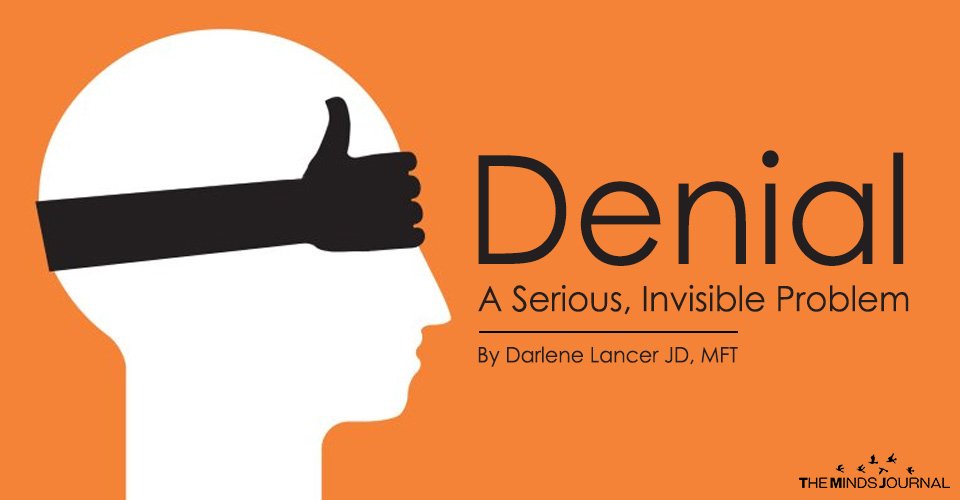 Denial is the first and simplest psychological defense mechanism. Typically, children deny wrongdoing to avoid reprimand. I recall my 4-year old shaking his head while denying from the chocolate-smeared mouth that he’d eaten ice cream in the wee morning hours. Adults deny wrongdoing, too, notably politicians, criminals, abusers, addicts, and adulterers. Conscious lies are usually motivated by self-preservation and fear of punishment. While not admirable, they’re understandable, though less sympathetic when motivated by a quest for power. What’s more troublesome is our denial in believing them.

Our brain is wired for survival, and denial serves that function.

There are many reasons for denial, including avoidance of physical or emotional pain. Denial is adaptive when it helps us cope with difficult emotions, as in the initial stages of grief following the loss of a loved one, particularly if the separation or death is sudden. Denial allows our body-mind to adjust to the shock more gradually.

It’s a unifying force between spouses, and among families, groups, or political parties. We overlook things that might that might cause arguments, hurt, or separation. One study showed that people will forgive a member of a clique four to five times more than a stranger. Idealization supports denial and blinds us to anything that would mar respect for a partner, family or group member, or leader.

We deny reality to maintain the status quo due to fear of change and the unknown.

For this reason, people believe the demonization of immigrants, or other races, or religions. If we favor a politician or love a cheating or abusive partner, we may ignore truths that would create disillusionment and/or require us to struggle with uncomfortable feelings and what to do. A deceived spouse might prefer to believe lies rather than confront an intolerable situation that is not only painful, but that could lead to unwanted consequences, like divorce.

We will defend untruths and blatant lies of people we want to believe. We tend to distrust information that’s contrary to our beliefs (including unconscious ones), and even double down to reduce inner conflict or “cognitive dissonance.” This process is termed motivated reasoning that helps regulate emotion. We consciously and unconsciously select information that affirms our beliefs and disregards facts that don’t. When we have internalized shame, we will do the same with positive feedback that is incongruent with internal negative beliefs about ourselves. Low self-esteem makes it difficult to receive a compliment, praise, and love. If we believe that we don’t deserve it, our minds can actually twist a compliment into criticism, and we can’t be convinced otherwise!

Shame breeds denial in both victims and liars. It’s a major cause of unreported abuse – why victims don’t disclose, minimize, and deny it and why addicts don’t seek help. We might ignore our mounting debt to avoid the same of admitting it and having to lower our spending or standard of living. A parent might look the other way to avoid accepting responsibility when his child is bullying peers or getting high. Facing the truth can expose us to pain, possible loss, and shame about our own behavior or shortcomings.