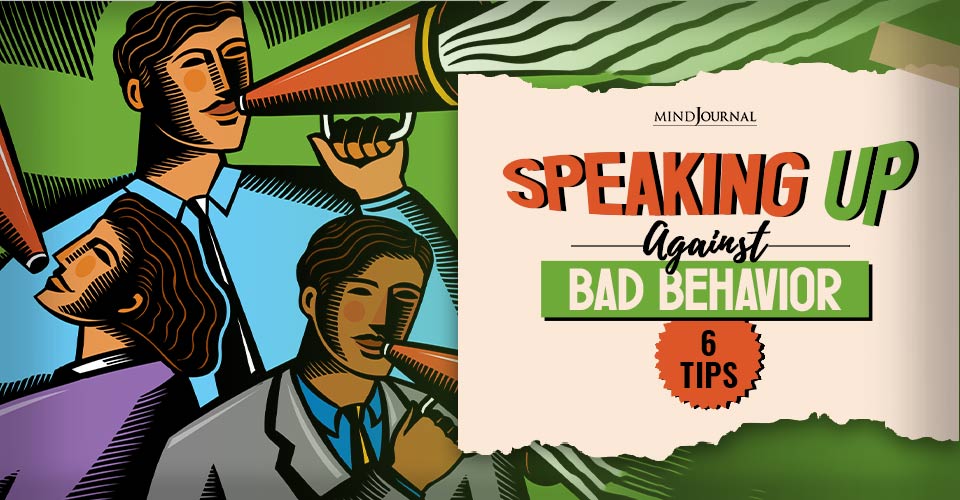 In every workplace, there comes a time for most working professionals that one might consider whether to report bad behavior or tolerate it. Many times they chose the opposite and opt for staying silent. Sometimes it’s not just about courage, but the idea of staying safe that withholds people from speaking up.

Psychologist Catherine Sanderson explains how to be more courageous in speaking up against bad behavior, from offensive speech to harmful actions.

When I was in college, my boss drove me to a meeting. He had trouble finding a parking place—and, when he realized we were going to be late, pulled into a handicapped parking spot. As we got out of the car, he turned to me, grinned, and started limping. I fully knew that what he did was wrong. And I said nothing.

My failure to call out my boss is hardly unique. Yet like most people, if you’d asked me beforehand if I’d have the courage to do the right thing—to confront someone who uses a racist slur or engages in derogatory behavior—I would have said yes. But in reality, most of us fail to step up when actually facing such a situation. Why?

One factor that inhibits speaking up against bad behavior is our fear of the consequences. Will it cost me a promotion or a raise? Will I lose a friendship, get a reputation as a troublemaker, or be excluded from subsequent family gatherings or meetings? I needed a letter of reference from my boss; I didn’t want to hurt my chances for a strong recommendation.

Related: Signs of A Toxic Person At Work : Workplace Bullying and Ways To Stop It

I’m not alone in having such fears: Many people knew for decades about the horrific behavior of entertainment executive Harvey Weinstein…and they said nothing. They feared, and probably rightly so, that reporting his repeated acts of sexual assault would have dire professional consequences. They stayed silent, and his behavior, of course, continued.

Another factor is confusion about what we’re actually seeing or hearing. Is that comment at the office a harmless joke, or is it racist and offensive? Is that spat a minor quarrel, or a serious case of domestic violence? Ambiguous situations like these make it harder for people to step up and act because we don’t want to appear stupid or overly sensitive.

Social psychologists have consistently found that people are far more willing to take action in the case of a clear emergency than when they find themselves in an ambiguous situation.

While intervening in a potentially violent conflict between strangers seems clearly the right thing to do, interfering in a domestic dispute may just cause awkwardness and embarrassment for all parties.

When facing an ambiguous situation, our natural tendency is to look to others to figure out what’s going on. But here’s the problem: If each person is looking to the people around them to act, and no one wants to risk feeling foolish and embarrassed, the problematic comment or behavior may be left unchallenged. And this silence conveys a lack of concern, or even tacit acquiescence, making it far more likely that it will continue.