The Narcissist Blame Game: Why It’s ALWAYS Your Fault? 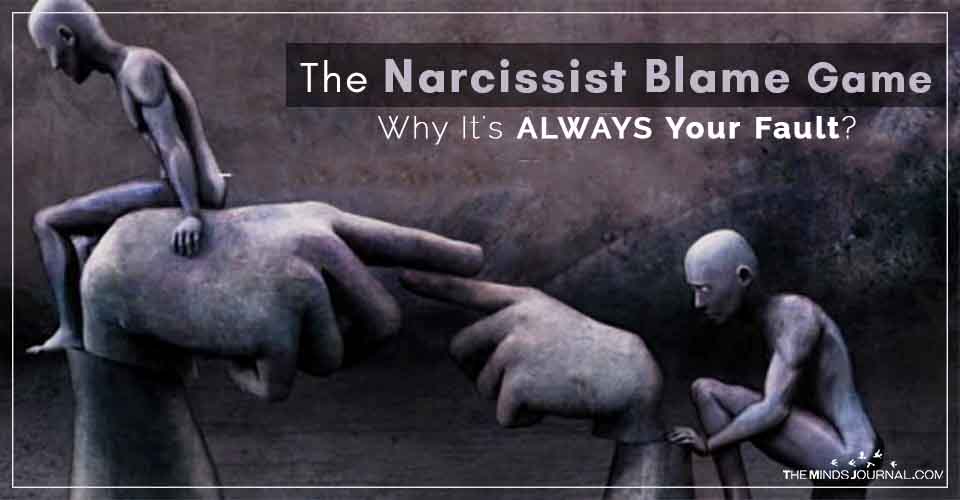 Why narcissists always blame you? Why is it always your fault?

Arguing with a narcissist? Stop it! It’s a futile attempt.

People with narcissistic personality disorder always consider themselves as right, responsible, successful, and genuine while others as wrong, irresponsible, losers, and liars.

How does the blame game start?

If you condemn your partner for ridiculing you over pretty matter, they will simply pinpoint to a situation somewhere in the past, that may or may not be related to the current scenario and remind you how you hurt them.

By playing as a victim they make sure it’s always you who is apologizing.

Even when you have all the pieces of evidence that clearly indicate your partner’s fault, they will come up with pity stories like harassment by mother in childhood and other traumatic events. That’s where you start sympathizing with them instead of questioning their hurtful behavior. But, they will never accept their shortcomings!

“I didn’t do it”, “you deserved it”, “they abused me”, “I was humiliated‘ are the common responses of narcissists, when you question their toxic behavior.

What if that doesn’t work?

Well, then get ready for the poisonous bomb. Your narcissistic partner will shower you with wild accusations like “you never ever loved me”, “you cheated on me” and things that you never ever dreamed of. Yes, that’s how they turn the table when they are blatantly caught of doing wrong to you. What a convenient way to avoid accountability for their mistakes. Isn’t it?

Why do Narcissists blame others?

If they do not blame others or external factors, it would cause them emotional pain that is too hard to bear.  They have a very fragile ego and it could crush if they fault themselves. So they always externalize blame unconsciously by playing the victim, minimizing your feelings, lying about others, arguing about the argument, and throwing terrible accusations. These blame-shifting techniques keep them safe and stop the feeling of anxiety or disgust and self-hating depression.

However, Dr. George Simon (internationally-recognized expert on manipulators and other problem characters, author and character development coach) says that not all narcissists these days are alike. Some are heartless, selfish, and cruel. Such narcissist doesn’t blame others unconsciously! But, they do it to make themselves look better in their own eyes after they have hurt you deliberately.

Narcissists can handle blame game very cunningly because they always want to be right and enjoy the feeling of superiority. And will leave no stone unturned to make you feel crazy to an extent that you doubt your own sanity.

Watch out what Dr. Simon says about understanding predatory aggressors:

Dr. Elinor Greenberg, (an internationally renowned psychologist and Gestalt therapy trainer also specialized in teaching the diagnosis and treatment of Borderline, Narcissistic, and Schizoid adaptations) says that narcissists blame you, its always your fault, to avoid shame and self-hatred.

According to Dr. Elinor, narcissists grow up with an inner critical voice that is harsh and devaluing. The voice rarely gives out praise but punishes them severely even for petty matters. Consequently, they sink into a pit of worthlessness,  poor self-esteem, and see themselves as losers.

Their psychological difficulties do not allow them to perceive themselves in a realistic way. Due to the lack of integrated self-care, they can’t see the presence of good and bad qualities in them. They view it as “all good” or “all bad”. If you pinpoint their flaws, they will hate themselves for being defective with no redeeming qualities.

This deep shame and inner voice teach narcissists to blame others and never admit their faults or for anything that goes wrong. The fear of being flawed by the world is always lurking in their mind.

Deep in their heart, narcissists are well-aware of their character flaws and how society perceives them. What makes things worse is the inability of narcissists to repair shame. They fear public humiliation and abandonment and to avoid such a mess they learn early in their life to never admit mistakes. So, they will twist the facts, manipulate you so that you don’t reach the depth of their disloyalty.

“Narcissists hate to get rained on because it ruins the mask.” – Tracy Malone

So, narcissists blame you for everything and tactfully manage a good impression. It’s you who will always end up as culprit (if you are naive and mentally disturbed). For those who are experienced in handling narcissistic relationships will never be enamored with the charming tactics of blaming and impression management.

But, Dr. George Simon argues that blaming to avoid shame may be the case sometimes. Contrary to this old thinking he says today most narcissists are shameless with severe deficiency of empathy – a trait of malignant narcissism. Hence, they don’t experience moral scruple that can prevent them to do manipulation, injustice or wrong to you.

Are you a psychopath? Let’s see if you Can You Pass This Test

What can you do when narcissists blame it’s all your fault?

“Maybe, the lesson we can all learn from the inner sadness of a Narcissist is to see through our own fabrications, our own illusions so that we can be set free to be real once more.” –  Shannon L. Alder

You need a high level of self-awareness so that you can peel off that fake mask and become less susceptible to manipulations and narcissistic abuse.
How did you handle narcissist blame game? Could you ever make them admit their defective behavior? Let us know in the comments.