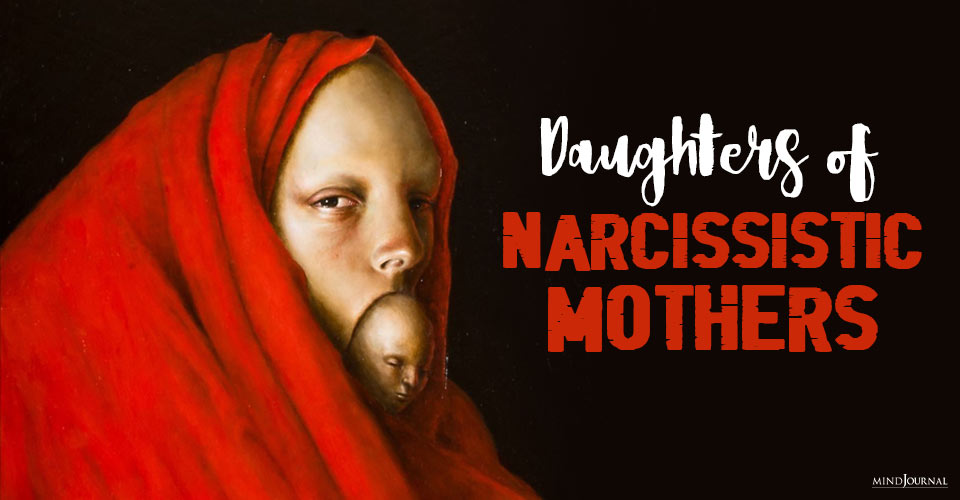 A mother’s presence is heaven’s abode, but what if this presence becomes hell for daughters? Being the daughters of narcissistic mothers can be severely damaging. Narcissistic mother feels they are entitled to control their daughters, which leads to them adopting manipulative strategies and emotional abuse to fulfill their needs and ego.

Our mother is our first love. She’s our introduction to the life and to ourselves. She’s our lifeline to security. We initially learn about ourselves and our world through interactions with her.

We naturally long for her physical and emotional sustenance, her touch, her smile, and her protection. Her empathetic reflection of our feelings wants, and needs inform us who we are and that we have value.

A narcissistic mother who cannot empathize damages her children’s healthy psychological development. Like Narcissus in the Greek myth, she sees only a reflection of herself. There is no boundary of separateness between her and her children, whom she cannot see as unique individuals worthy of love.

Symptoms of narcissism that make up narcissistic personality disorder (NPD) vary in severity, but they inevitably compromise a narcissist’s ability to parent.

The following are some of the characteristics and consequences of having a narcissistic mother. Notice that they unwittingly get repeated in adult abusive relationships, including relationships with narcissists, because they’re familiar – it feels like family.

What is it Like Being The Daughters Of Narcissistic Mothers?

Some of the effects on daughters are different than on sons because girls usually spend more time with their mother and look to her as a role model. Due to a lack of boundaries, narcissistic mothers tend to see their daughters both as threats and as annexed to their own egos.

Through direction and criticism, they try to shape their daughter into a version of themselves or their idealized self.

At the same time, they project onto their daughter not only unwanted and denied aspects of themselves, such as self-centeredness, obstinance, selfishness, and coldness, but also disliked traits of their own mothers. They may prefer their son, although they can harm him in other ways, such as through emotional incest.

Emotional comfort and closeness that normal maternal tenderness and caring providers are absent. Narcissistic mothers may tend to their daughter’s physical needs, but leave her emotionally bereft.

The daughter may not realize what’s lacking, but longs for warmth and understanding from her mother that she may have experienced with friends or relatives or witnessed in other mother-daughter relationships.

She yearns for an elusive connection, felt fleetingly or never. She doesn’t learn to identify and value her emotional needs, nor know how to meet them.

What remains is emptiness and/or anxiety, a sense that something is missing, and an inability to nurture and comfort herself. She may look to fill it in other relationships, but often the pattern of emotional unavailability is repeated.

Narcissistic abuse, including repeated shaming and control, undermine the developing identity of a young girl, creating insecurity and low self-esteem. She cannot trust her own feelings and impulses and concludes that it’s her fault that her mother is displeased with her.

She’s unaware that her mother will never be satisfied. In severe cases of emotional or physical abuse or neglect, a daughter may feel she has no right to exist, is a burden to her mother, and should never have been born. If not also abusive, often husbands of narcissistic women are passive and don’t protect their daughters from maternal abuse.

Some mothers lie and hide their abuse. A daughter doesn’t learn to protect and stand up for herself. She may feel defenseless or not even recognize mistreatment later in adult abusive relationships.

She rarely, if ever, feels accepted for just being herself. She must choose between sacrificing herself and losing her mother’s love–a pattern of self-denial and accommodation is replayed as codependency in adult relationships. Her real self is rejected, first by her mother, and then by herself.

The consequence is internalized, toxic shame, based on the belief that her real self is unlovable. How could she be worthy of love when her own mother didn’t love and accept her? Children are supposed to love their mothers and vice versa! A daughter’s shame is compounded by anger or hatred toward her mother that she doesn’t understand.

She believes it’s further evidence of her badness, and that all her mother’s criticisms must be true. Never feeling good enough her life is one of continual striving and lack of fulfillment. Since love must be earned, her adult relationships may repeat a cycle of abandonment.